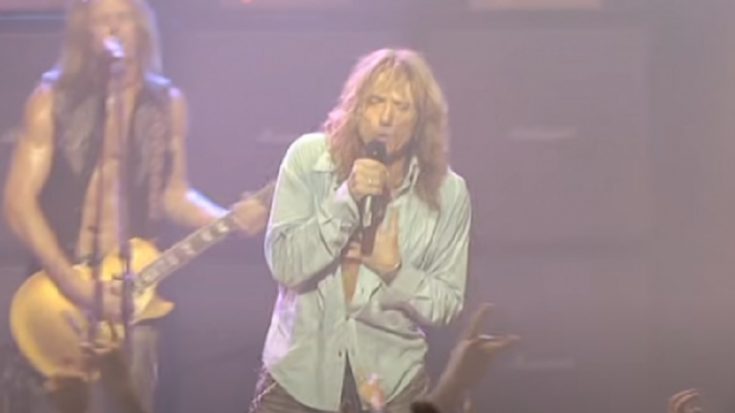 When it comes to judging love songs from rock bands, music fans often have the last say. Below, we’ll take a listen with these 15 greatest love songs from Whitesnake catered to that type of thinking. With Whitesnake, who oftentimes use love as their main topic for lyrics, fans have come together to rate what’s best among the rest. It’s not easy to generate some sweet tunes if it won’t sell or be appreciated by its listeners; fortunately, Whitesnake is lucky in that arena.

This top hit from Whitesnake truly made them a star, garnering positions from worldwide charts. And who could forget that iconic music video featuring David Coverdale and his then-wife Tawny Kitaen dancing together?

The song’s perfect tempo for a power ballad; starting slow with overflowing emotions, is then followed with a drastically hard-rock rhythm, an even better arrangement. Coverdale once revealed that drummer Colin Powell mentioned “Love Ain’t No Stranger” to be the best song he’d ever played drums on.

Trouble is Whitesnake’s first studio album, and although the band were rookies in the arena with the exception of Coverdale, it quickly rose high on the UK album charts, generating the 50th spot.

Whitesnake can either gain fame from their sensual lyrics or from their album covers, there’s no in between. Lovehunter became controversial for its explicitness, but so is the song “Love Hunter.”

Whitesnake might’ve created their reputation from sexually suggestive lyrics and double entendres, but once in a while, you’d get to see some powerful lyricism from Coverdale. Among those is “Only My Soul,” a track from Snakebite.

This power ballad came from the band’s 1989 album, Slip of the Tongue. It toys under the hard rock/ glam metal genre, two of Whitesnake’s strongest fortes.

The concluding track of the band’s 11th studio album of the same name, “Forevermore” still draws the feeling of why the band is great in the first place.

Coverdale was no rookie to plagiarism issues, most especially with “Still of the Night,” when the singer was accused by Led Zeppelin Robert Plant from copying their “Black Dog” and “Whole Lotta Love.” The singer denied it.

“Looking For Love” is among the tracks released under Whitesnake European cut. The song, however, wasn’t released in the UK.

This classic hit is a rock staple to any of the band’s concerts, even to this day. The song’s MV was the first one not to feature Tawny Kitaen.

“And here I go again on my own/ Goin’ down the only road I’ve ever known/ Like a hobo I was born to walk alone.” Who doesn’t recognize the lyrics of this gem?

Inspired from Coverdale’s divorce from his longtime partner and Whitesnake muse, Tawny Kitaen, it was originally created with a blues tone, but John Sykes, the guitarist, hated blues, so it was re-recorded to hard rock.

The song was originally recorded by the band for their 1980 album, Ready an’ Willing, but it was re-recorded again with a different feel under their Slip of the Tongue LP. It was inspired from the heartbreak that Coverdale experienced from his divorce.

A lot of Whitesnake’s songs were inspired from Coverdale’s marriage breakdown from Kitaen, including this one.

“Slow an’ Easy” became the band’s answer to their US breakthrough. It became a hit on rock radios, and also gained them a momentum in the country.