What you didn’t see at the Oscars: Rami Malek falling off stage, keeps his Oscar safe! 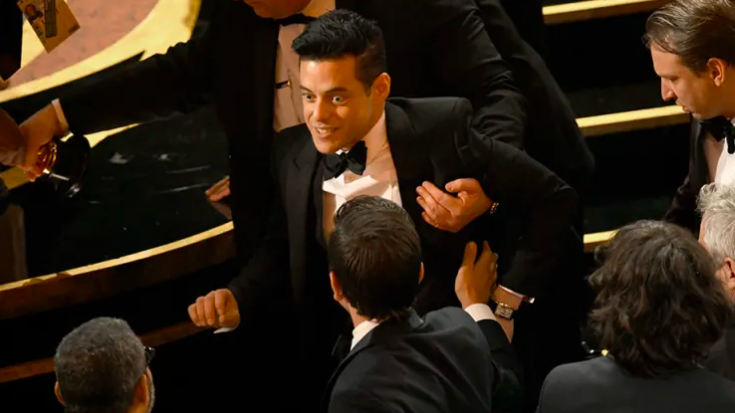 And another one bites the [Oscar stage] dust!

Rami Malek is the newly-minted Best Actor Academy Awardee for his incredible portrayal of Queen’s frontman Freddie Mercury in the biopic Bohemian Rhapsody. It seems to be a thing now to win these coveted prestigious awards and fall to your face upon receiving it. It famously happened to Jennifer Lawrence whose clumsy moment became synonymous with her win. At the beginning of the awards ceremony, Best Supporting Actress winner Regina King nearly stumbled on her dress going up the stage to receive her Oscar before the ever-so-gentlemanly, Captain America himself, Chris Evans came to her rescue and offered a muscular arm to assist her to the stage. The internet deemed him the winner for “Best at Supporting Actress”. Unfortunately, or fortunately for us watching at home, those clumsy moments were caught on camera and televised around the world.

Rami Malek’s clumsy moment, however, happened after the show has aired and the cameras were packed away. Lucky for us, footage and photos of his tumble still surfaced. After winning the award for Best Actor, Rami just lost his footing and fell off the stage, with people around him not really registering what had happened to the Bohemian Rhapsody actor right away but still rushed to assist him. Rami was rightfully a bit surprised himself on his little incident in which paramedics had to be called to make sure he was alright. Thankfully, he was not badly hurt, just frazzled. He seemed to walk the whole clumsy moment off as he was seen popping a bottle of champagne to celebrate his win just a few moments after paramedics tended to him.

The winner takes the fall.

Here’s a clip of his Oscar stage tumble:

THE WAY RAMI FELL I- pic.twitter.com/3YmdjPcEln