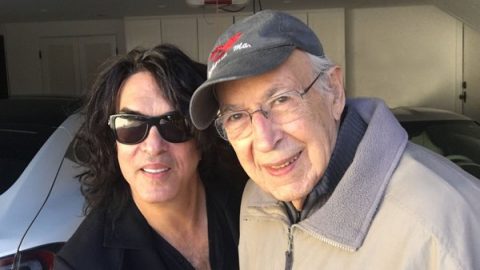 The oldest and most special fan in the audience at the Feb 16 KISS show in Los Angeles was none other than Paul Stanley’s 98-year old father!

Stanley had invited his nonagenarian dad to the iconic rock band’s concert on their “End of the Road” tour and shared the very special moment on Twitter. Stanley and Stanley Sr. posed for a photo in front of the KISS photo op area backdrop and posted it with the caption,

“MY DAD! The oldest and coolest man ever at a KISS concert. At The Forum Saturday night. He’ll be NINETY NINE in April!

From the photo and the enthusiasm, Stanley shared, it looks like the father-and-son duo are proud of each other. What a sweet moment to have, and how lucky is Paul that his dad keeps supporting him even at 98 years old.

Paul Stanley was born on Jan. 20, 1952 in Manhattan and was raised in Queens, New York. He was a singer and guitarist throughout his youth and made his musical talent into a career when he joined the band Wicked Lester with Gene Simmons in 1970.  Though Wicked Lester fell apart, Stanley and Simmons decided to continue with their music careers together. They eventually formed KISS and released their self-titled debut album in 1974.

KISS launched their “End of the Road” farewell at the beginning of this year and will continue throughout Spring of this year for the current North American leg of the tour.