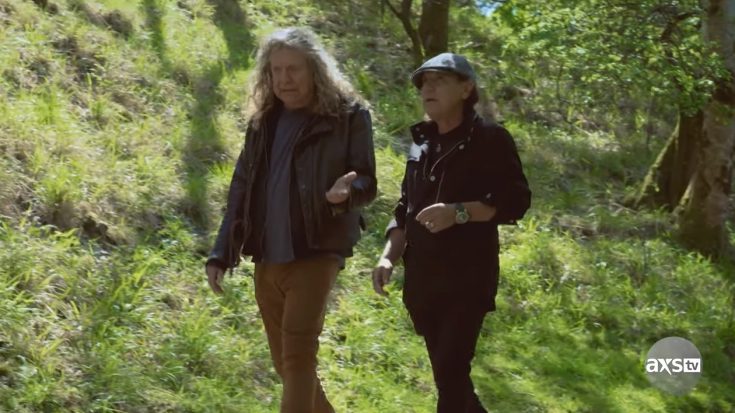 Robert Plant hasn’t lost his quick wit one bit in an interview with Brian Johnson. The AC/DC frontman’s TV show A Life On The Road, has the former Led Zeppelin god as his most recent guest. Plant joked around that Brian Johnson could have replaced him in Led Zeppelin, while discussing the band’s history.

The two discussed the past affairs of Led Zeppelin while taking the scenic route among the hills of Wales. Plant started off saying, “Cream, the Grateful Dead, the white blues thing was kicking in. And you had that great West Coast thing going on with Jefferson Airplane and stuff. You had a subculture develop, and we kind of attached ourselves to that. We didn’t have any social statements to make. We weren’t visionaries, in that sense. But we were, still by our age, at the time, still part of that huge movement of energy.”

Plant also recalls the play of destiny in putting the four members of Led Zeppelin together, saying he and John Bonham “had played a lot together. Jimmy [Page] and John [Paul Jones] had been in various bands, but they were session guys, and they were pretty well-heeled, pretty hot on the scene. But it didn’t matter to me and Bonzo – all we wanted to do was get a square meal.”

Brian Johnson agreed with Plant’s sentiments, and apologized for reiterating common questions about the band’s history. Plant didn’t mind, and even chucked in a joke, saying, “I can’t hardly remember any of it at all!” The two went on to discuss the energized frenzy of tracks like “Immigrant Song”, where Plant told Johnson, “If you want a job now I can put a good word in for ya!”

As the clip transitions, the two can be seen exploring the path near the ancient Bron-Yr-Aur cottage, a place where the Plant-Page duo wrote numerous Zep classics. “We rented the cottage I used to go to when I was a kid, which is not far from here. And we began the writing of Led Zeppelin III up there. And it was great, because it was so far away from the chaos of touring. You know what it’s like … you kept going, we had to stop,” Plant shared.

You can watch the clip by clicking on the video below!