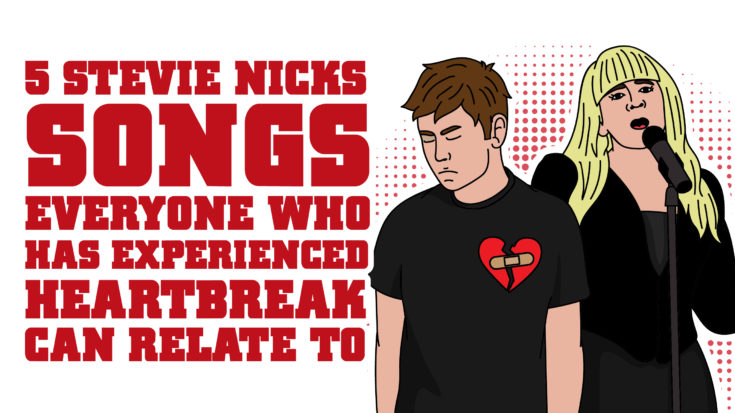 Listen To The Queen

Have you ever had one of those days when you didn’t want to get out of bed and you just feel like eating a whole tub of ice cream to wash out the bitterness in your mouth? And then you think, if only there’s one person out there who knows exactly what you’re going through, someone who can accurately say what’s going through your mind because they were in your shoes once. Someone like Stevie Nicks.

Well, I’ve been afraid of changing
‘Cause I’ve built my life around you

A 25-year old Stevie Nicks wrote this during the time she was at a crossroads – she was thinking whether she should go back to school or pursue a career in music with Lindsey Buckingham. The latter was a huge risk, however, because their relationship was in hot water and their Buckingham Nicks album was dropped by their label. She penned this while sitting on a living room in Aspen, Colorado. She said that she was at that point when she was like, “I’m not happy. I am tired. But I don’t know if we can do any better than this. If nobody likes this, then what are we going to do?” And this song became her decision to continue doing what she loved. Even if she and Lindsey were struggling, she was willing to take a risk – and it’s all in the name of love. Then again, it paid of nicely, did it not?

I know I could’ve loved you, but you would not let me.. (Give me one more chance)
I’ll follow you down ’til the sound of my voice will haunt you..

If there’s anything we learned from all the drama between Lindsey and Stevie, it’s that there’s no better poetic inspiration than pain and heartbreak. There are so many not-so-subtle verbal attacks in many of Fleetwood Mac’s songs and this is one of them. Stevie Nicks is tired and is ready to leave everything behind. It’s the kind of break-up song we can all relate to. She wanted to remind Lindsey of what he’s missing and that he couldn’t shrug her off that easily. It wasn’t about the growing tension, it was the ending of their relationship. According to Stevie, “I wrote “Silver Springs” about Lindsey. And we were in Maryland somewhere driving under a freeway sign that said Silver Spring, Maryland. And I loved the name … Silver Springs sounded like a pretty fabulous place to me. And, ‘You could be my silver springs…’, that’s just a whole symbolic thing of what you could have been to me.”

You say you want your freedom / Well, who am I to keep you down?
It’s only right that you should / Play the way you feel it
But listen carefully to the sound / Of your loneliness

Reportedly written in less than 10 minutes, this is perhaps Stevie Nicks’ greatest contribution to Fleetwood Mac. It feels poignant on so many levels – it talks about the tragedy and reality of lost love. It’s hauntingly beautiful and it pretty much summed up all the relationship drama among the band members. She said in one interview: “I always put something at the end that says there’s hope. You know, ‘When the rain washes you clean you’ll know.’ And that’s an old Indian [Native American] custom…that if it rains ~ something like that ~ when somebody dies, if it rains their spirit is set free.” It’s probably a tough song to sing especially because it perfectly described all the emotional turmoil between Christine and John, and Stevie thought it might also upset Mick and Lindsey. Although there’s something painful about the song, it still somehow uplifts you. You can listen to it and actually feel a little relieved.

You are not happy, but what is love?
Hate gave you me for a lover…

These are some strong words from Stevie Nicks – a vividly, haunting imagery of an ‘inside look’ into how she feels for Lindsey. What’s great about this is the fact that when you try to distance yourself from all the drama in your relationship, deep down, you still want to preserve the love. But anyway, this is about as close to a musical perfection as you can get. And that’s not surprising given that it’s basically the song that captivated Mick Fleetwood and made him reach out to Stevie and Lindsey. Lindsey admitted that though they were lovers, they also kept on competing on a musical level (as evidenced by all he-said/she-said in their classic and unforgettable hits). At some point we always wondered why they didn’t just break up when this bickering started pre-Fleetwood Mac? Well, this song answers it. And it’s also a reality check for all of us – we were once in their shoes.

Stevie Nicks wasn’t prepared for another heartbreak when after a concert, Lindsey said goodbye to the band and left. Basically, this song is about seeing someone walk out of your life – someone whom you have shared so much with, someone you dearly loved. It’s about being okay with having some regrets on what you did in the past and still letting yourself move on, allowing yourself to break free from that chain. Nevertheless, it’s a sad and melancholic song. But with every line, it’s becoming way more intense and personal. And perhaps the most painful part is when she sings, “I lost him again… yesterday.” It feels so heavy and it really gets to you. She never thought he could walk away but he did. It’s one of the most difficult stages before you can move on – you have to accept they’re gone and they’re never coming back. Then you need to start picking up the pieces of your broken heart.