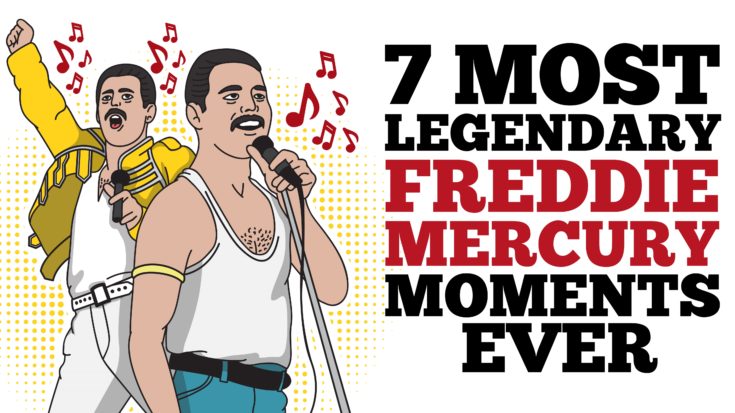 Warning: This Will Make You Miss Him

Freddie Mercury is larger than life. Ask anyone who has ever been to his concert and they will all tell you, the man himself is a show. He’s almost otherworldly. He found it so dang easy to captivate his audience with one song. Now, let’s go back to some of his greatest moments that will make you feel nostalgic.

This is legendary in more ways than one – for the most part because it’s Freddie Mercury’s last show. We’re pretty jealous of those people who were there during the concert. They are surely one privileged bunch. It was on August 9, 1986 when more than 120,000 people gathered at Knebworth Park to witness various performances from British acts. The main attraction was Queen of course. At the time, everyone already knew the legend that is Freddie Mercury and everybody wanted to be lucky enough to see him perform live. And just like in every single gig they’ve had, Freddie didn’t disappoint – not one bit. It was outstanding and powerful but the thing is, nobody had the slightest idea it would be the last time anyone could see Freddie on stage. The band arrived in true Freddie Mercury fashion – by riding a helicopter. Why, did you expect anything less from this rock god?

Another thing we love about Freddie Mercury is his versatility. He’s not just a powerful vocalist but his creativity knows no bounds. Also, while he’s a force to be reckoned with on stage, he proved with this music video that he can make anything fabulous – even doing house chores. From the moment we see him in a tight, leather skirt complete with black stockings and baby pink top – we lost it. This song is gold but the MV is a real gem. At first we were like, “Is this for real?” then we were like, “Oh my god! Only Freddie can pull this off!” And it’s true. This is probably the best MV ever created – it’s been more than 30 years since it was released and we still can’t find anything that would even come close to this. According to Roger Taylor, “We had done some really serious, epic videos in the past, and we just thought we’d have some fun. We wanted people to know that we didn’t take ourselves too seriously, that we could still laugh at ourselves. I think we proved that.”

We’ll be honest with you here. It was so difficult trying to condense Freddie Mercury’s greatness into just seven moments. Because we all know the truth, every time he went on stage, he was like a firework – explosive, breathtakingly beautiful and someone you can’t look away from. Anyway, we don’t understand why “One Vision” is so underrated. You see, when you ask people what’s their favorite Queen song, very few would mention this track. Actually, we think not everyone is aware of this classic’s existence. We believe it speaks volumes of the band’s musical brilliance especially Freddie. He was captivating and it’s like everyone in the audience was spellbound with his presence. And of course, he didn’t pass up the chance to inject some of his sense of humor – just listen closely to what he says after the second verse. Well now, no one else can ignite a crowd like Freddie!

This live performance will make you clutch your pillow tighter and might also push you to the edge of your seat. Ah yes, it’s one of Queen’s glory days. But you know, to be fair to all of them especially Freddie Mercury, they always played as if they still had to prove to the world how talented they were. In fact, at this point, they have already secured their place in rock ‘n roll history. Nevertheless, they still manifested that edge and sense of urgency which are inherent in bands just starting out. That must be their greatest secret – they always play like there’s no tomorrow. And this one is no exception. It’s like Freddie and the boys never had one bad gig. Don’t you just love seeing Freddie in his finest form? The man oozed with so much talent and musicality. It’s stuff like this that reminds us nobody can ever hold a candle to him.

We keep on saying how much of a musical genius Freddie Mercury is and somehow, that is never enough. He always managed to make singing effortlessly beautiful even when he had to belt out ridiculously complex tracks. It’s as if every clip of their live performances are telling us what we already know – he’s insanely talented. He hits high notes like they’re nothing (but when you try them at karaoke, it takes every inch of your energy to even sound decent). And you know what, this was Queen at the height of their career which probably explains why this is so amazing. Even Roger Taylor sounds so incredible – a real monster with those powerful vocals! There are so many things we love about this song and a huge chunk of it is because of Freddie. We couldn’t get over when he said, “Okay let’s do it.” This is why he’s a freakin’ legend.

No wonder this is considered as the ‘happiest song’ of all time and backed by scientific facts at that! It’s hard to stay sad and gloomy after hearing this cheerful tune. And just like the other performances on this list, Freddie Mercury shines almost effortlessly. He is a natural showman. He can just sit on his piano and play and still manage to captivate his audience. And when he stands up and starts walking around the stage, well all eyes were on him especially in his tight red leather pants and tie. Seriously, no one can rock this outfit better than Freddie and he has his only reliable prop – a bottomless mic. This man always seemed like he was a big ball of energy. We tried doing that – singing and sprinting – and boy, we were out of breath in no time. This is why nobody can ever come close to him, let alone top him.

Is this even remotely surprising? Whenever we had to choose Queen’s defining moment, it would be this without a doubt. Freddie Mercury proved to everyone they weren’t just any other band, they were not a one-hit wonder. In sum, he stole the show at Live Aid. It makes you think, “How is this possible? Is there some sort of magic or sorcery involved?” But no, that’s all Freddie and his amazing talent. Even Brian May said, “That was entirely down to Freddie. The rest of us played okay, but Freddie was out there and took it to another level.” It was the greatest 20 minutes of all time. In half an hour, Freddie managed to put as much bravado and enthusiasm as he could muster and channel it to the audience. Anyone who ever saw this performance could do nothing but stare at him in awe. He absolutely owned the stage!