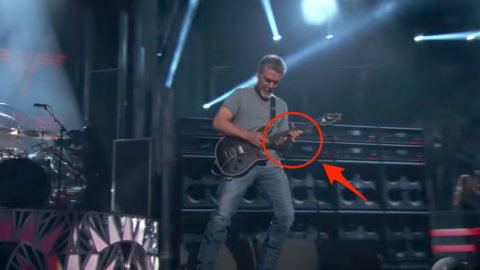 The performance everyone’s talking about!

Happy Monday! It seems like everyone is talking about the phenomenal performance put on by Van Halen on last night’s Billboard Music Awards! The seasoned rock veterans opened up the iconic awards show and featured frontman David Lee Roth fearlessly mixing a plaid suit with scuba gear as he coyishly hit up Nicki Minaj during their performance of ‘Panama’. Eddie Van Halen is as dreamy as ever – more than 30 years after the birth of ‘Panama’‘, he still rips through the song as effortlessly as breathing!

It was such a treat to tune into the Billboard Music Awards last night and see Van Halen tear their way through their classic hit! You have no idea – in an industry saturated by imitators, it was such a breath of fresh air to see legends opening up a show designed to celebrate the successes of today’s artists, and Van Halen did not disappoint!

And even though the riffs to “Panama” are as legendary as the song itself, Eddie Van Halen once revealed he doesn’t remember how he came up with them. He said in an interview with Billboard magazine:

“I have no memory of coming up with any of those riffs. Even the stuff I wrote for the last record, I don’t remember. It just comes to me.”

Don’t you wish stuff like this also just comes to us? That’s basically what genuine talent is. And it’s also the reason why he may get so much hate for essentially breathing but it’s undeniable that EVH’s contribution to rock ‘n roll and music in general is invaluable.

Some say he’s overrated but we beg to disagree. Just watch this video and you can see he deserves every single credit he got.