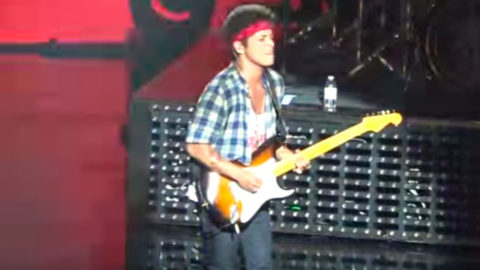 If there’s any lingering doubt about Bruno Mars’ talent, this will put them to rest. After his epic and much talked about Grammy tribute to Prince this year (we still can’t get over how good that was by the way), we wanted to look back and see his past performances. And well, we’re blown away. He sure knows how to bring down the house! It’s always about enthusiasm and high energy – two things you always see when he’s on stage.

“The concept is that as long as we have our instruments and our mics, my band is able to kill anywhere. We’ll play a party sometimes, and we do a residency in Vegas that’s more of a free-for-all, and the band will sweat no different than we’re gonna be sweating at the O2. We can perform in a cafeteria with no production, so when we do get the smoke machines and the lights, that’s just a bonus.” – Bruno Mars

He also likes to pay homage to several music legends like Michael Jackson and in this particular video, the iconic Led Zeppelin. Seriously though, what can he not do? He only proves he’s worthy of his fame – the guy’s got a bucket load of talent which everyone will agree on. This makes us look forward to his future performances and we’re hoping he’ll do more classic rock covers!

He’s already paid tribute to other iconic musicians like Adele, Amy Winehouse, Prince, Tina Turner, Bob Marley, The Police, and Elvis Presley. And can we just say? He never disappoints. He’s one of those musicians who own the song once they’re on stage and this time, it’s no different.

Even if you’re not a huge fan of his music, it’s undeniable that Bruno Mars is one talented musician and he does more than just rely on technology.