The Overlooked Songs From Each Guns N’ Roses Album 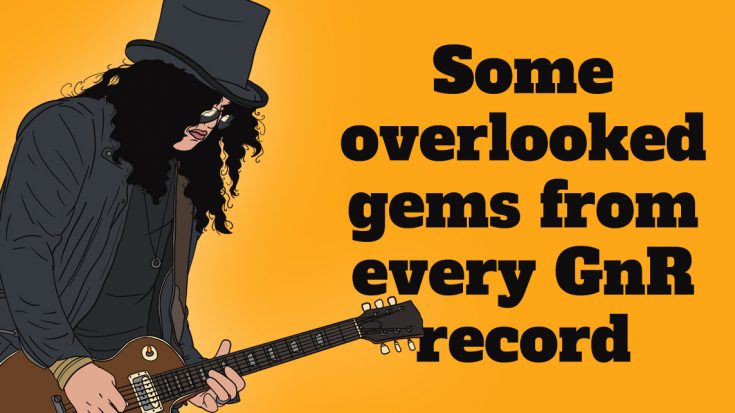 If there was a band that perfectly captured the reemergence of good ole’ gritty rock and roll in the late ’80s, it had to be Guns N’ Roses. Despite the hair metal aesthetic they wore that was prevalent in the era, the LA-based rock act knew what was missing in the scene back then. Guns were successful during the first few albums of their career, but this suddenly dropped off due to the growing troubles of the members which included disruptive behavior and drug abuse, to name a few.

That being said, Guns N’ Roses still has a treasure trove of tracks that weren’t as appreciated as they were back in the day. Here are some of the underrated cuts from the hard rock band’s catalog of albums.

Young liked the song’s honesty, fortunately. Slash has since then reported that Michelle had managed to clean up her life and moved across the country in the process.

The country sound of “Used To Love Her” might be an unusual move for heavy rockers like GNR, but it was a breath of fresh air amidst their usual fanfare. Most people thought it was about an Axl Rose girlfriend, but Izzy Stradlin debunked this, saying: “I was sitting around listening to the radio and some guy was whining about a broad who was treating him bad. I wanted to take the radio and smash it against the wall. Such self-pity! What a wimp! So we rewrote the same song we heard with a better ending.”

Axl Rose is responsible for the guitar riff on the song, which starts out with an acoustic instrument before panning out to the full band’s sound with a nutcracker effect cue. The intro is reprised after the final chorus and is then ended by a fast-forwarded version of the song.

The promotional single for the second Use Your Illusion record, “So Fine”, had an unorthodox spin on roles as bassist Duff McKagan takes on lead vocals for the song while Axl Rose does the intro verses. “So Fine” was intended as a tribute to Johnny Thunders of the New York Dolls.

The Sex Pistols track “Black Leather” is a great upgrade from the original version as it features a livelier and more energetic groove. For an album as controversial as The Spaghetti Incident? and its all-cover lineup, Guns N’ Roses up the ante on this gem.

The main piano progression of “Street of Dreams” gives it a hopeful quality that gives way to a brief rock section. It almost takes a ballad-like form which is quite rare of the band in its latest form. It has been a staple of concerts since 2001 but GNR has since dropped it on the Appetite for Democracy tour of 2012 and hasn’t been used since then.