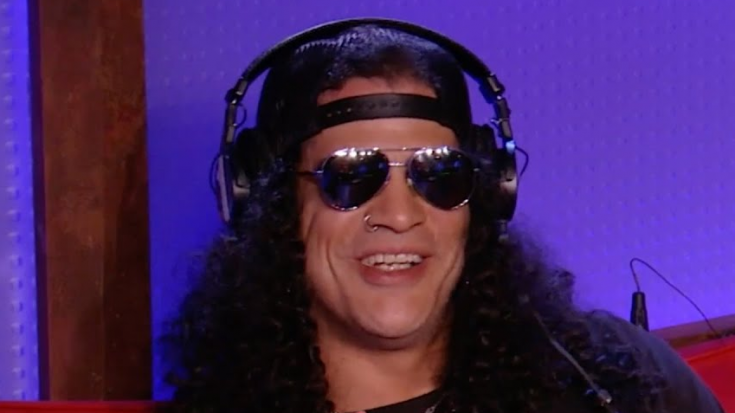 During a recent interview on Jimmy Kimmel Live!, Guns N’ Roses guitarist Slash talked about the time he tried to get into a club with his bandmate Steven Adler while dressed in his mother’s clothing.

Slash reminisced about a hilarious time he and Steven Adler had when they were both about 15 years old. At the time, the two friends planned a visit to the Rainbow and, in order to gain entry, they obtained some fake IDs. However, only Steven Adler was admitted and Slash was not. Slash was devastated but had resolved to get into the club by any means necessary, including doing something memorable. He returned to his house, where he dressed in his mother’s clothes and applied makeup. The guitarist was able to gain entry upon his second attempt.

“There was one time I actually went to the Rainbow with Steven Adler, who was my partner in crime back when we were 14 and 15 years old,” Slash explained. “We went in there, and I showed them the ID and Steven showed them his ID, which I had done for him too. They let Steven in, and they wouldn’t let me in. They said ‘Get out of here!’ and I was just crushed. So, I went home, put on a bunch of makeup, and put on some of my mom’s clothes. I was really drunk, you have to understand. And I went back up there, and it was ladies’ night. That’s what it was. So I went back, and I got in. The whole thing of it for me was I was going to go and pick up on Steven because Steven would screw anything. I thought it’d be really funny, you know.”

But when Slash got there, he says, Adler was nowhere to be found.

“Anyway, so I got in, and then slowly but surely, I started to realize Steven was not here. He was gone, and this whole black cloud of reality came down. I felt the most vulnerable I’d ever feel. Still to this day, I’ve never felt like that. And then, having to leave and walk down Sunset Boulevard in a dress back to my car— you know, anything that sounded like a whistle, anybody raising their voice, or anything, I thought was directed at me. It was horrible.”

You can watch the clipped interview below.