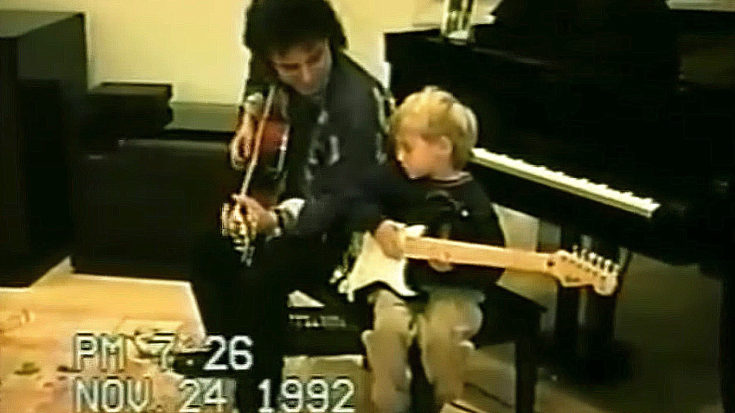 It’s always a proud moment when as a parent, you can pass down your passions to your children and watch them learn and grow into them over time. In the case of Journey founder Neal Schon, that pride has increased tenfold as he’s watched son Miles grow into a musical force to be reckoned with, carving out a musical legacy of his own that began in the best of ways: guitar lessons with dear old dad.

In a recently surfaced home video dating back to 1992, Neal can be seen perched on a piano bench with little Miles next to him, both cradling guitars and strumming along to something playing over a stereo system; sure, Miles’ hands are still too little to really do much but strum blindly at his Fender Stratocaster while Neal holds things down with an acoustic guitar, but this precious moment between father and son is a great reminder that moments like this are what shape great musicians.

Fun Fact: Neal first picked up a guitar “around the age of 5,” and by 15 was already one of rock’s most sought after guitarists, attracting the attention of Eric Clapton for a spot in Derek and the Dominos before ultimately joining Santana.

If that’s not enough for you, the video cuts to footage shot a few years later when Miles is old enough to absorb what Neal is teaching, sporting his very own kid sized guitar and watching studiously as dad shows him the ins and outs of the fretboard that he would quickly come to know like the back of his hand. Now a fiercely gifted and successful musician in his own right, Miles Schon is carrying the Schon family torch wonderfully and we can’t wait to see the incredible places his talent will continue to take him. Check out the video below and as always, enjoy!