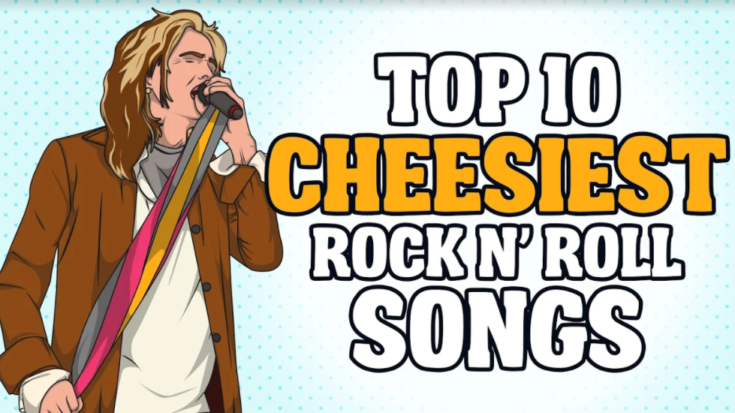 Some Good, Some Bad

We hope you’re starving because we’re about to serve you some real gooey, cheesy goodness. But for the record, just because they’re cheesy doesn’t mean they’re bad. We actually like most of them and honestly, we know the lyrics by heart. From cringeworthy, hyperemotional lyrics to overall corny feel, what’s not to love about them? In a world full of songs about drugs and sex, there’s the in-between.

Who doesn’t love a good ballad about love, anyway? Or an acoustic serenade to make you swoon? These are huge hits and it came to a point when they were inescapable – you hear them practically everywhere and it’s as if every music-loving person was singing them.

Whether you admit it or not, they’re catchy and they could get stuck in your head for days on end. So without further ado, here are some of the cheesiest rock ‘n roll songs of all time.

It’s a classic and an epic masterpiece at that. There’s no way you can listen to this and not feel like you’ve just been transported back to the ‘80s. There are so many things we’d like to forget about that decade but this isn’t one of them.

It was on heavy rotation in MTV and has only become more popular over the years thanks to being featured in several films and TV shows most recently, “Stranger Things 2.”

“I think ‘Rock You Like A Hurricane’ is a perfect Rock anthem, which talks about attitude and sexuality. It’s very important to recognize the tension between the verses and the chorus.” – Guitarist Rudolf Schenker

Is it cheesy? Yep. But it’s undeniably a great hard rock song. And that guitar riff intro is everything – catchy, fun to listen to and easily recognizable. Also, it’s one of the best things that decade has to offer.

Sometimes, we’re embarrassed by the fact that we constantly have to fight the urge to sing along once this song comes on. Besides, there’s nothing cheesier than “I wanna know what love is / I want you to show me…” Oh wait, maybe there is.

Either way, you just can’t picture out any grown man (and a hard rocker at that) singing such cheesy lines.

“’I Want To Know What Love Is’ started off on more of a personal level. I’d been through a lot of relationships that eventually failed, and still searching for something that could really endure. And that sort of took a life of its own as well. It became more of a universal feeling.” – Guitarist Mick Jones

The thing is, even if you find it overly dramatic, it remains one of Foreigner’s most enduring hits and for people to still know the song well after more than three decades, that definitely says a lot.

Poison, a glam metal band, releasing “Every Rose Has Its Thorn” isn’t exactly the most shocking thing to happen in the ‘80s. You see, that was the time in music when making power ballads was a surefire way to sell.

Not everyone’s happy about it but hey, it lines the pockets and more. Like for Poison, this song was their ONLY #1 hit in the US.

“I remember using a pay phone to call this girl I was dating. We were on the road, touring in our Winnebago, and my relationship was falling apart. I still have the yellow legal pad I wrote it on. There are, like, a bazillion verses that I later edited down.” – Bret Michaels

We know it’s cheesy but it’s beautiful. And while it’s sort of different from other rock songs we know, it’s still a classic. Plus, it’s perhaps Bret Michaels’ finest musical moment.

Did you see what we did there? With the “Extreme?” Sorry, we just couldn’t resist. So anyway, radio stations have done injustice to this song by overplaying it. Obviously, no matter how good something is, too much is just too much. At one point, you probably rolled your eyes when you heard, “Saying “I love you” is not the words I want to hear from you…”

“Nobody ever knows how big a song is going to be. But I knew the day we wrote it that something special was there.” – Nuno Bettencourt

It’s a simple tune and it’s one of those tracks you want to play on easy, lazy weekends. The lyrics are served with extra gooey mozzarella but we can’t complain. There’s a reason why it remains popular today. Is it overrated? Well, that’s for you to decide. But it’s enduring and is responsible for propelling Extreme to international stardom so there’s that.

The title alone is enough for this song to land a spot on our list. And the lyrics don’t help – “Make a bad one good make a wrong one right / Power of love that keeps you home at night…” Yes, it’s as cheesy as it can get but at least, it’s giving us some Back to the Future feels. Obviously, Marty McFly approves.

It’s not just the cheese factor which sold it to listeners. The theme is pretty universal too – you know, who can’t relate to anything about love?

We can joke all we want about “Rosanna” being one of the cheesiest rock songs out there but it’s Toto at their absolute best. Besides, it was a chart-topper and was even certified gold by the RIAA so that really silenced all their haters.

You gotta love the feel-good vibe of this song. However, we’re still a bit confused whether Rosanna is real or not. Some say it’s about the actress Rosanna Arquette who was then-dating keyboard player Steve Porcaro. But there are those who think that’s a general misconception.

“’Rosanna’ was about a high school love, one of my first loves, but I just tagged another Rosanna’s name on there because she was going at the time with Steve Porcaro, my best friend. He had just met her and was looking to title a song with her name, and it just fit perfectly for that song right there. So it’s got her name on it, but it’s really about another high school sweetheart, which is how songs happen sometimes.” – David Paich

What’s cheesier than being immortalized in rock music by having your name on a classic hit? Nothing, absolutely nothing.

If it had been any other singer than Ann Wilson, we would have cringed at these lines – “Till now I always got by on my own / I never really cared until I met you…” But it’s Heart people, the band can play the yellow pages and it will sound good. Cheesy? Yes but still an epic masterpiece at that.

It might be a cover version but it’s also Heart’s best song. Also, Ann pours out her soul here and she effortlessly took it to another level.

“We made a new demo of the song very quickly and presented it to Ron Nevison, who was producing Heart at that time. He loved it and they cut it.” – Writer Billy Steinberg

It’s the perfect power ballad to end all power ballads. Sure, the words are kind of cheesy but heck, Ann could sing the most cringeworthy words and still slay it.

We only need the first few lines to see if this one’s oozing with melted cheese. “Love hurts, love scars, love wounds / And marks, any heart / Not tough or strong enough…” We’re betting you sang that just now.

Although it was originally recorded by The Everly Brothers, it was Nazareth who made a huge hit out of it. Years later, most people still associate this song with them even though theirs is just a cover version.

“Wished I had written it?…every friggin’ day! (laughs) Get the girl and the boys will follow! Especially if the lead song on the album is a Son of a bitch ..Oops I mean Hair of the dog!” – Manny Charlton

There are several versions of the song but Nazareth still takes the cake. Why? There’s a raw emotion about it that we just can’t get over with. It’s like you’re channeling his pain just by listening to the song. It’s cheesy but it’s enduring.

The only reason we categorized this as “mild” is because Steven Tyler still manages to sound bad ass even though he sings “Every moment spent with you is a moment I treasure…” He’s probably the only one who can pull that off. If it had been any other singer, we would’ve tagged this as “extreme.”

Still, it’s not Aerosmith’s first foray into power ballads but we will forever remember it as the cheesiest. That doesn’t necessarily mean we don’t like it. On the contrary, it’s a good song.

“At the time, we just didn’t have the time to settle down and do it. We were out on the road, so they brought us in to see the movie and said ‘here’s the song, this is where it fits into the movie, you can do it if you want.’ So we were in the studio within the next three days cutting it. And yeah, we do wish that we’d had a little more time, so that we could have had a shot at writing it, but it was perfect timing. The song was great, people loved it, and I don’t think people care that much who wrote it.” – Joe Perry

The fans are kind of divided when it comes to this song. But when you think about it, Steven Tyler can go from hard rock to ballad and it will still sound great.

And the winner for the cheesiest rock song goes to – drum roll please – Starship’s “We Built This City!” It’s often tagged as the worst rock song of all time and that’s still debatable because we can think of five other tracks that deserve that title.

But anyway, the one thing we can surely agree on is that it’s massively hated by classic rock fans and for good reason.

“So I was trying to make it up to the band by being a good girl. Here, we’re going to sing this song, “We Built This City on Rock & Roll.” Oh, you’re shitting me, that’s the worst song ever.” – Grace Slick

Preach, Grace Slick, preach. We don’t usually say this but dang, it deserves all the hate it gets. It’s cheesy and not in a good way, exactly. This is one of those songs we wouldn’t mind not hearing in the next 100 years.