10 Worst Albums By Your Favorite Bands 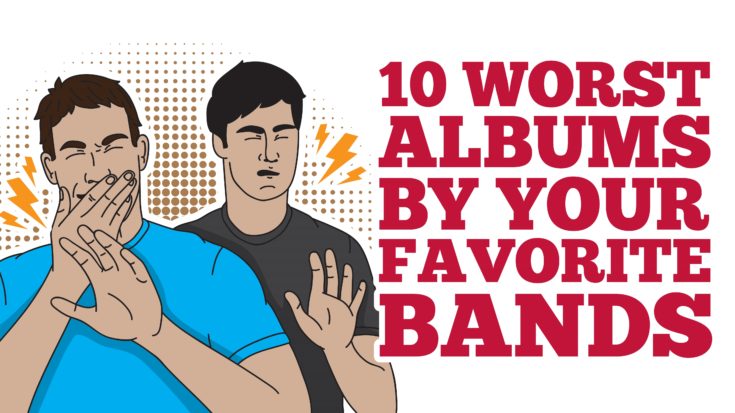 Consider It Their ‘Lowest Point’

If you’re familiar with Howie Day’s song “Collide,” one line goes “Even the best fall down sometimes.” And that’s true even for the greatest musicians in rock history. It’s hard to find any group or solo artist who has nothing but good songs and albums – heck, even The Beatles had their bad musical moments. So we’re listing the worst records from great bands. It’s proof that even the greatest rockstars take the wrong path sometimes.

On the plus side, this allowed them to evolve.

There are records from our favorite bands that make us say, “Oh God. They finally hit rock bottom.” For the legendary Black Sabbath, this is the one for them. Even their most loyal fans were shaking their head from side to side. This last album featuring Tony Martin on vocals was unforgettable but sadly, it’s for all the wrong reasons. It was the kind that will convince you the band was barely hanging on there. Not surprising enough, after it failed to wow the critics and fans, there were several changes in the member lineup. Eventually, Ozzy Osbourne reunited with Tony Iommi. Allmusic’s Bradley Torreano was unforgiving when it came to his review. He wrote, “with boring songs, awful production, and uninspired performances, this is easily avoidable for all but the most enthusiastic fan.” Even Iommi admitted he wasn’t happy and satisfied with the album. Well, we totally understand how he feels.

Before he gave us “The Rise and Fall of Ziggy Stardust and the Spiders from Mars,” “Hunky Dory,” “Low” and “Heroes,” David Bowie’s self-titled debut album released on June 1, 1967 was less than stellar. Perhaps we have his then-manager Ken Pitt to blame for this misstep in his career because he wanted Bowie to be an ‘all-around entertainer’ instead of becoming the rockstar he was supposed to be. Biographer David Buckley was on-point when he described it as “the vinyl equivalent of the madwoman in the attic.” And what’s worse is, it was released on the same day as The Beatles’ “Sgt. Pepper’s Lonely Hearts Club Band.” It was a commercial failure, to say the least. It cost him his record contract when he was dropped by Deram Records in April 1968. Bowie himself admitted that the album “seemed to have its roots all over the place, in rock and vaudeville and music hall. I didn’t know if I was Max Miller or Elvis Presley.”

Let’s just think of “Angry Machines” as a little stumble on the road for the iconic group Dio. Besides, this particular era wasn’t exactly a strong period for metal. While it wasn’t all that bad, it was mediocre. And by Dio standards, that’s not even remotely acceptable. It’s as if it was completely devoid of any of Ronnie James Dio’s magic. It’s a lot like expecting to see them live and you only get a recording – yes, it’s equal parts frustrating and anti-climactic. It’s so straightforward and bland that listeners rarely remember anything remarkable about it – no face-melting riffs or unforgettable melodies. According to Dio’s wife Wendy, “musically speaking, my least favorite album [for the DIO band] was ‘Angry Machines’ [1996], because I felt that Ronnie had taken a turn that he was being pushed into, to become more industrial. His fans didn’t like it that much, and I’m glad he decided to change and go back to the usual way of writing.”

There’s not much to tell here except that it’s not exactly the kind of debut album any band would want. You need something explosive, something that promises greatness or something that hints at amazing musical things to come. This album isn’t one of those. Sure, it has its moments but overall, it’s not the type to bring an entire audience to its feet. It’s like a mere shadow of their hard rock glory which they immensely enjoyed later on. They lacked focus and they were stumbling upon one style after another. It somehow sounds confusing and not as tight as their greatest albums when they were already at the top of their game. Guitarist Eric Bell shared, “A lot of it was ad-libbed. The three of us just went for it in the studio because we were all smashed.” Well, there’s nothing left to say but we’re just mighty glad they came through.

Where do we even begin? We love Iron Maiden and will defend them to death but this album just leaves us speechless. True, it has some redeeming qualities but it cannot ward off all the other awful elements in this record and some of it are repetitive enough to require a bucket load of patience from the listener. It’s not even surprising that after its release, it was met with nothing but negative reviews from both critics and fans. AllMusic was straight to the point on why it fell short of our expectations by writing, “on the surface, there’s nothing terribly wrong with the record, as it delivers all the crunching riffs and demonic horror of their best records. The problem is that there’s nothing memorable about the hooks, riffs, or songs, and there’s little visceral energy to the music or production. As a result, it sounds lifeless to all but the most devoted fan.”

For most bands, every album becomes a learning process – they junk what doesn’t work and experiment again. There are those who do it right and eventually achieve the sound they’re aiming for and which the fans and critics love. On the other side, there’s Judas Priest’s “Demolition” which was ill-fated from the moment it was conceived. After “Jugulator,” the band thought that maybe what people wanted to hear was some of their original sound. They wanted it to appeal to every kind of fan – those who liked their ‘80s music, nu-metal sound, and some riffs similar to “Jugulator.” And the result? Well, everyone was less than thrilled with what they managed to come up with. If the reception to “Jugulator” was poor then “Demolition” was way worse. They were obviously at a crossroads and all the efforts they poured into the making of this album merely fell on deaf ears.

There’s only one phrase that comes to mind whenever we listen to this album: “Kill it before it lays eggs.” It’s one of KISS’ longest records (almost an hour long) but as soon as it starts playing, you just can’t seem to wait for it to end. To call it terrible would be an understatement. Its most successful single, “Forever,” is a power ballad co-written by Michael Bolton. We have no words for it. It’s a bitter pill to swallow. That’s not something we ever thought would happen – not in a million years. But apparently, it did. And what’s worse, one track sounds a whole lot like Def Leppard’s classic hit “Pour Some Sugar on Me.” We understand that some rock songs may sound similar but this is almost like a total rip off. Surprisingly though, it received gold certification from the RIAA on December 20, 1989. Maybe, that’s the only silver lining.

With so many amazing records and brilliant musical masterpieces, you’d think Journey has never had a low point in their catalog. Wrong. Their self-titled debut album was less than excellent and is basically all over the place. It was jazzy progressive rock and the band was obviously still in the process of finding their sound. It had its moments but it was still a long way to go. Besides, their greatest hits were mostly when Steve Perry joined the group and thus propelled them to a new musical direction. But this one is not even close to their works when they were at the height of their career. According to AllMusic’s Stephen Thomas Erlewine, “their pop songs are ill-formed and lack hooks — in short, they are too mainstream for the progressive audience and too unfocused for the pop audience.” While we’re a huge fan of Journey, this is definitely not one of their finest moments.

Here’s the thing, when you’re as big as Megadeth and you’ve been rolling one amazing hit after another, the moment you release an album like “Risk,” it’s going to be nothing more than a major disappointment. There are risks that pay off, then there’s this. They wanted to venture into alternative which, as you may have already guessed, wasn’t the way to go because fans wanted their traditional sound. According to Dave Mustaine, “If anybody else’s name was on ‘Risk’, it would have sold.” That is partially true. It sounds decent enough but Megadeth is known for their heavy metal sound – something this album totally lacks. It would have been fine if someone else was written as the artist, basically anyone except stamping Megadeth on it in big, bold letters. AllMusic’s Steve Huey was a little sympathetic when he wrote, “Risk is not much of a departure from its two predecessors; more reflective, melodic, and conventional than the Megadeth of old, it delivers a well-played set of hard rock tunes suitable for metal and AOR fans alike. Some of those tunes are catchier than others, and they’re enough to carry the album if you’re a fan of this style.”

This was probably the first thing on your mind the moment you saw the title of this list. We can’t blame you, though. If you have mixed feelings towards “St. Anger,” then you’re not alone. The band members were unfocused and they were obviously at a career crossroads. How can any heavy metal group consider NOT playing a guitar solo on an album? That’s one of the things lacking in this album. And please, don’t even get us started on the cheesy and head-scratching lyrics. It’s not something both critics and devoted fans expected from them. There’s no variety in style and some tracks are way too long (which would have been fine if they were good and exciting). Michael Christopher wrote, “St. Anger dispenses with the recent spate of radio friendly pleasantries in favor of pedal to the floor thrash, staggered and extended song structures, quick changes and a muddled production that tries to harken back to the Kill ‘Em All days. All attempts fail miserably.”