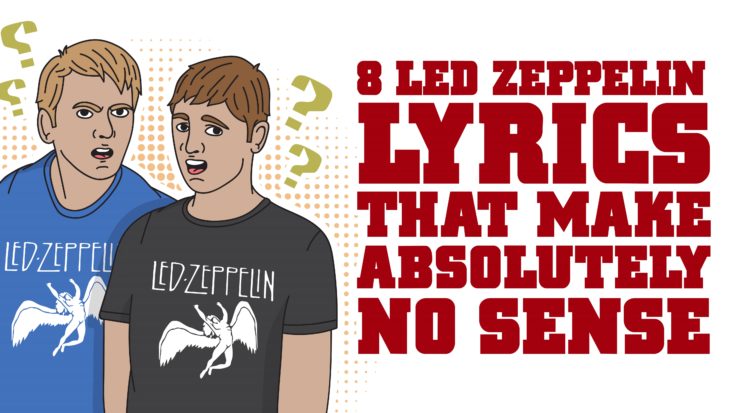 They’re unarguably a creative bunch. They were musical geniuses individually but as a rock group, they were powerful and unstoppable. They never failed to blow us away and leave us staring at them in awe. But sometimes, rare times, when we listen closely to some of their lyrics, we’re left confused.

Check out this list and tell us, if you can, what the heck the lines mean.

“Take of the fruit, but guard the seed.”

We dig every single Led Zeppelin song and this particular track takes us on a wonderful musical ride even though it’s unjustly underrated (if you haven’t listened to this, you’re committing a crime against these rock gods and you wouldn’t want to see them angry, lol). Excellent musicianship – check. Mind-blowing bass line – check. Head-scratching lyrics – double check. We like how this gives us some JRR Tolkien vibes – from words about a ‘ring’ of calm to the bows and armor. It’s an interesting imagery, to say the least. We’re pretty sure there are metaphors and some figures of speech here. Still, however, we can’t quite get a grasp of what Robert Plant meant when he sang the line above. Perhaps we can all agree that this isn’t the easiest song to follow and much more, understand. Sometimes, we can’t even get the lyrics right!

“’Twas in the darkest depths of Mordor
I met a girl so fair
But Gollum, and the evil one
crept up and slipped away with her…”

Okay, maybe by now you probably realized how much of a fan of JRR Tolkien’s “Lord of the Rings” Robert Plant was. Yes, this is a pretty weird take on Middle Earth and some of its characters. The opening line is even a paraphrased version of another Tolkien piece, a poem called “Namárië” which was written in a constructed language Quenya. Maybe you’ve seen the movie so we have one question: why would Gollum and Sauron be more interested in a girl than the Ring they were so obsessed about? Nevertheless, Jimmy Page’s smooth solo, John Paul Jones’ melodic bass lines and JPJ’s interplay with John Bonham – it’s definitely one for the books and a real masterpiece. Still, we can’t get over how that little creature Gollum managed to make it here.

“Below the streets that steam and hiss,
The devil’s in his hole.”

In truth, this is a majestic track and it’s really no surprise why it’s one of Jimmy Page’s personal favorite. It’s hugely underrated but hits you right in the feels. From Robert Plant’s highly passionate vocal performance to John Paul Jones and John Bonham’s rhythm and of course, Page wrapped everything up nicely with his guitar leads. Watch their live performances and you can feel raw emotion pouring out from Page’s axe. It’s almost otherworldly. It’s guaranteed to get to you every single time. Page and Plant wrote this while the latter was recovering from injuries he got after a car accident way back in 1975. They wrote it in one month while staying at Page’s home in Malibu, California. The lyrics were mostly inspired by Plant’s experiences during his travel in Morocco. According to Page, “I knew it had to be jolly good, because the number was so long it just couldn’t afford to be half-baked.”

“The pain, the pain without quarter.
They ask no quarter.”

Again, this is another example of a pretty impressive imagery. From beginning to end, all we can think of is how it’s beautiful yet so dark. And of course, we can never get over how epic it sounds – it’s one of the best Led Zeppelin tunes we’ve ever listened to. And boy, it’s intense. Sure it’s not the heaviest song in their catalog but it sure has that ‘metal’ feel to it – the mood and execution are both walking the fine line between classic rock and metal. To be fair, the lyrics don’t make too much sense when you just read it. But in its most literal sense, ‘no quarter’ is actually a military expression that means that the victor takes no prisoners if the latter surrenders at discretion. Hmm, it makes sense now… just a little bit though because somehow, we still find it quite confusing.

“This is the mystery of the quotient, quotient – Upon us all, upon us all a little rain must fall.”

According to Jimmy Page, this was inspired by the Quiet Beatle. He said, “George [Harrison] was talking to Bonzo one evening and said, ‘The problem with you guys is that you never do ballads.’ I said, ‘I’ll give him a ballad,’ and I wrote ‘Rain Song,’ which appears on House of the Holy. In fact, you’ll notice I even quote ‘Something’ in the song’s first two chords.” It’s one of the most beautiful ballads of all time and mostly because of Page’s jaw-dropping and face-melting guitar displays. The vocal performance and acoustic beauty are indescribably good. But while we’re well aware that this is among the group’s finest works, we just can’t turn a blind eye on the wrong use of the word ‘quotient.’ Mathematically, it refers to the result when you divide one quantity with another. So…

“Squeeze me baby, till the juice runs down my leg. [X2]
The way you squeeze my lemon, I’m gonna fall right out of bed.”

If you think this has anything to do with the famous phrase, “When life gives you lemons…,” then you’re probably too young to listen to this. The sexual innuendo is quite unmistakable. We can’t help but think when did Robert Plant go from singing about Gollum, Sauron and all those in Middle Earth to lemon-squeezing? Apparently he became so fond of this metaphor (“squeeze my lemon”) which is why it got included into the song. Sometimes, he would even use it for medleys or other performances. It just doesn’t make any sense why this double entendre should be part of this track – it has soul, it’s funky and has one of JPJ’s most impressive bass lines. It’s all good until you start singing the lyrics and realize why it’s called ‘The Lemon Song’ in the first place.

“And when the sun peeked through
John Cameron with Suzanna,
He kissed the whiskers, left & right.”

This is yet another underrated track from the group’s catalog. We still don’t know why it’s not as popular as their other musical masterpieces. The words may not mean much from the upfront but there’s actually an interesting story that inspired it. Whenever they’re touring in New Orleans, Led Zeppelin would stay at the Royal Orleans Hotel. One time during the ‘70s, John Paul Jones met a woman at the bar and brought her up to his room. All the time, he was unaware she was a transvestite. They both smoked marijuana and fell asleep when the lit joint suddenly caught fire and eventually burned the entire room down.

In an interview with Mojo magazine, JPJ clarified: “The transvestites were actually friends of Richard [Cole’s]; normal friendly people and we were all at some bar. That I mistook a transvestite for a girl is rubbish; that happened in another country to somebody else… Anyway ‘Stephanie’ ended up in my room and we rolled a joint or two and I fell asleep and set fire to the hotel room, as you do, ha ha, and when I woke up it was full of firemen!”

“I saw a lion he was standing alone with a tadpole in a jar.”

By now you’ve probably figured out that Led Zeppelin can get away with pretty much anything – they can have lyrics that make no sense, sound way too lascivious or bizarre. But the fact of the matter is, they still managed to make masterpieces out of every single one of them. Take this song for example. Looking at the words, it doesn’t seem like it should mean anything. But listen to the song and you’d be blown away. It’s unlike anything you’ve ever heard before. Their catalog contains a wide variety of styles that it’s fairly impossible for anyone not to like them. This one is no different. We like it but we’re not digging the lyrics. Still though, the live version is tight and insane. If you don’t believe that ‘rock gods’ are real then you’ll be an instant believer after watching.