Yes, There Is An AC/DC Tribute Band Called GayC/DC! 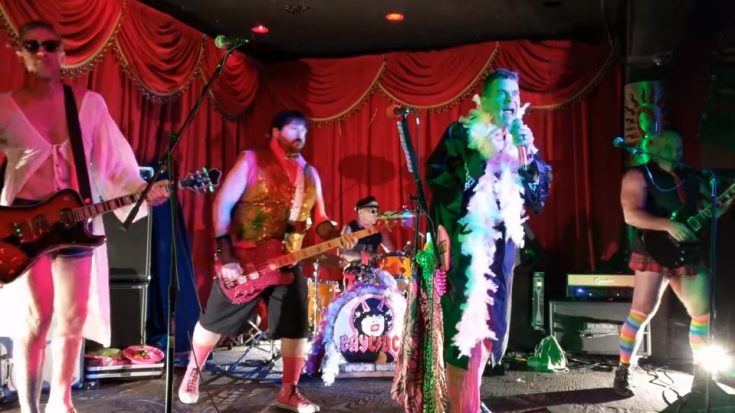 Rock music has seen its fair share of fans taking admiration to the next level with tribute bands, and some even adding their own flair with parody bands. Who would’ve thought it’d be a great idea to become a tribute/parody act to one of the biggest rock bands on the planet, AC/DC?

Strap up (no pun intended) for the biggest turnaround on one of the most masculine brands of rock, with the glamorous yet scalding GayC/DC! A Los Angeles-based cover band, GayC/DC is the homosexual re-imagining of classic rockin’ AC/DC hits, with “Problem Child” becoming “Bottom Child”, “Whole Lotta Rosie” into “Whole Lotta Jose”, and “Dirty Deeds Done Cheap” becoming “Dirty Dudes Done Cheap”, you’re in for a whole new world of hard rock.

Drummer Brian Welch says the band re-imagined the songs to fit their narrative, because hey, equality. “I grew up listening to AC/DC, they’re part of my DNA. But that whole ‘boy/girl/boy bangs girl’ thing wasn’t something I could relate to. I wanted the songs to speak to me and that’s a big reason we started this band. Now, those iconic songs can speak to others who felt the way I did. And who can resist taking it to the most fabulous extreme! We love AC/DC. That’s why we do the music spot on, but have a bit of cheeky fun changing the lyrics around.”

Vocalist Chris Freeman supplements the sentiment, “I feel the same. For me, the whole experience of AC/DC is dripping with macho heterosexuality, and that part was hard for me to relate to. But I loved the music, that part I could relate to.”

The band’s members came from equally queer bands as well, like Pansy Division and The Gay-Gays, the former enduring almost 3 decades of a career runtime.

When asked how they came up with the name, Freeman said “We started throwing out band names with ‘gay’ in them and I think it was Karl who said GayC/DC and I thought, ‘hmmm…around that time, I met Steve (McKnight) and with his background in guitar shredding from being in Cry Wolf in the ‘80s, he was a natural to be our new lead guitarist, so then we just needed a vocalist.”