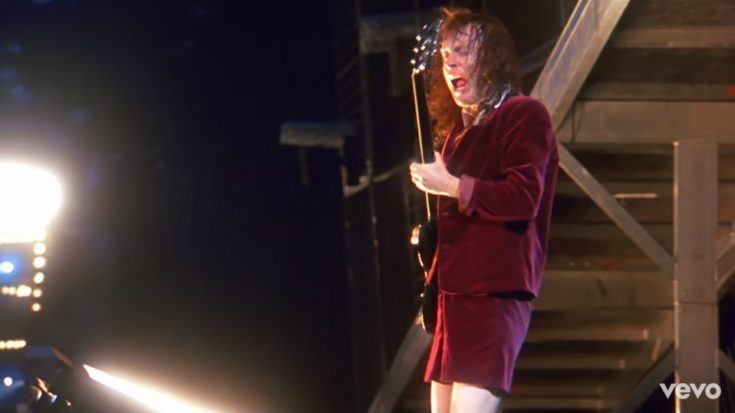 For the world of hard rock, nothing is more memorable than the template AC/DC has given us. Master axeman Angus Young showed to the world that a tiny man (he was 5’2″) could rock just as hard as his iconic counterparts. In a way, Young became an icon of his own niche, with his schoolboy uniform ensemble and devil horns to complete the look. To complement that was Young’s electric stage presence, prancing around in a more driven version of Chuck Berry’s duck strut. But more than his image, was his creative genius. The man wrote the most memorable riffs and solos in rock history, utilizing simple progressions and styling them up with the brusque grit of AC/DC’s brand. With that, here are some of Angus Young’s best solos.

Young is a bluesman in all honesty with “Highway To Hell”, providing a thumping progression for Bon Scott’s vocals to ride on. Containing the story about the classic deal with the devil for success, the track contains one of Young’s most powerful and blues-influenced solos, one could mistake it for Chuck Berry’s. Its use of the pentatonic minor, along with some conclusive major notes, makes the song one of the most notable tracks of the band’s catalog.

The track boasts of Angus Young’s technical mastery of the fretboard, and he showcases it clearly with its contrasting clean and distorted parts. The lumbering groove is suddenly accented by a blazing arpeggio with bent notes for extra weight and impact. Young’s alternation of slow and fast sections comprise the track’s memorable solo.

A classic live set staple, “Rocker” is said to contain one of Angus Young’s greatest solos. Again, Young showcases his virtuosic skills with a blazing fast yet accurate lick pattern, with occasional blues sections that give it its signature weight. The solo does well in hyping up its arrangement, becoming one of the adrenaline shot tracks of the band.

The fun-filled track of the band’s comeback album was a testament of their resilience after Bon Scott’s death. AC/DC made Scott proud with the track that sounded like the band trying to fool around but with precise and cautious steps. The bass registers add a heaviness to the track, with his blues rock licks on the upper part of the neck and occasional pinch harmonics highlighting the whole arrangement.

The title track of their 1980 comeback was enough to blow the minds of waiting fans all over the world. Young shines through with one of the most genuine rock riffs and solo on this one, and being a true master of contrasting sounds, “Back In Black” showcases simple riffs overlaid with complicated solo runs and arpeggios, but Young also emphasizes what most rock records miss: feel. Providing a texture with his bent notes, Young evokes a youthful vibe from this true-blue rocker.