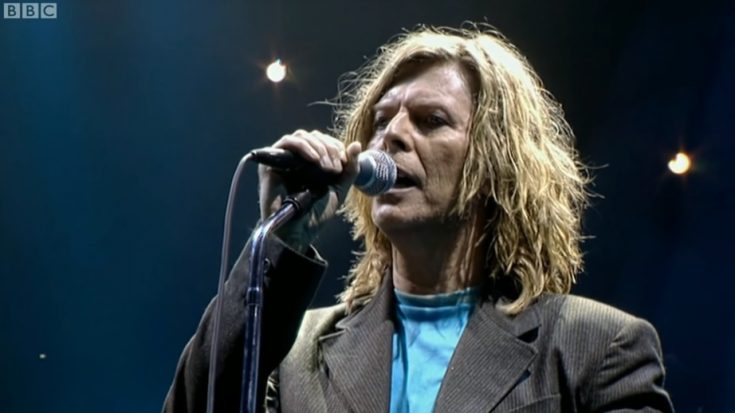 The King is dead, long live the King.

As much as David Bowie’s Ziggy Stardust persona brought him success, he eventually got tired of it all. The extraterrestrial glam rocker wasn’t doing Bowie any personal growth, and he had to find a way to ditch Ziggy. Bowie decided to kill off Ziggy Stardust by donning a new one, by the name of Aladdin Sane. This new, darker character was the product of Bowie’s journey in America. The dregs of society inspired Bowie to innovate with the heavier themes of reality.

20 PAGES OF BOWIE PLUS 24-PAGE PHOTO SPECIAL IN CLASSIC ROCK – “At the centre of it all, at the centre of it all…” – The new issue of @ClassicRockMagazine (#251, Summer 2018), has fifty pages of Bowie-related content, including the cover, a full-page advert for next week’s Welcome To The Blackout release, thirteen pages dedicated to "BOWIE: His Greatest Songs" and a separate 24-page Bowie photo supplement, confusingly called "BOWIE BACKSTAGE", containing 26 classic Bowie photographs, of which, just 5 are actually backstage. The magazine also has a 4-page article on the criminally underrated Pin Ups album with recollections of the recording sessions from Mike Garson (http://smarturl.it/MGFBpage), not to mention a 6-page Mott The Hoople retrospective, though we just did. The "BOWIE: His Greatest Songs" feature has a chronologically listed 58 songs chosen by a similar number of rock luminaries. The selections inspired us to create a Spotify playlist of over four and a half hours. Binge listen here: http://smarturl.it/CRBowieBestSpotify The songs start at The London Boys and end with Lazarus, with some wonderful contributions from various rock persons. Here’s a bit of what Dave Matthews had to say regarding Blackstar: – + – + – + – + – + – + – + – + – + – + – + – + – + – + – + “The song and the album are both unbelievable. I find it almost infuriating that somebody could be such an unrelenting artist. Staring at one’s own mortality and calmly producing something of that magnitude – also doing it in secret! – is barely conceivable. I mean, put yourself in the place of his band. When they find out that he was there singing and making that music, knowing his time was dwindling…Good grief, what kind of a human being could do that?” + – + – + – + – + – + – + – + – + – + – + – + – + – + – + – #BestOfBowie #ClassicRockMagazine

With the iconic thunderbolt streak across the pale, ghastly facade of Aladdin Sane, Bowie was fully committed to this new phase in his artistic expression. The entropy of this new persona and the accompanying LP allowed him to produce the sleaze infected, chaotic sound Aladdin Sane was known for. A clever play on words, it also spelled out as “a lad insane”. According to Bowie, this was a monumental point in his career, “There was a point in ’73 where I knew it was all over, I didn’t want to be trapped in this Ziggy character all my life,” Bowie continues. “And I guess what I was doing on Aladdin Sane, I was trying to move into the next area – but using a rather pale imitation of Ziggy as a secondary device. In my mind, it was Ziggy Goes to Washington: Ziggy under the influence of America.”

And while Aladdin Sane was not your conventional chap, the persona and music related to those who are stranded on this rock in space we call home. The ostentatious LP was conceived as Bowie was on the road in his Ziggy Stardust tours, indicating his premeditated course of action, with “Watch That Man” and “Jean Genie” penned in New York, “Cracked Actor” in Los Angeles, “Drive-in Saturday” between Phoenix and Seattle, and the title track on board the RHMS Ellinis. Bowie sought inspiration for the new persona with the stimuli he encountered along the way.

Aladdin Sane’s unprecedented success even before its release reinforced Bowie’s resolution to continuously reinvent himself. Aladdin Sane was the pivotal point of Bowie’s numerous transformations, which led to him being dubbed as The Chameleon. Bowie’s constant seeking of change and innovation was cemented his place as the industry’s most versatile rock artist. Ziggy Stardust paled in comparison to Aladdin Sane, child’s play really. David Bowie’s restless energy traversed multiple realms of artistry, only to cease due to the mortality that plagues us all.