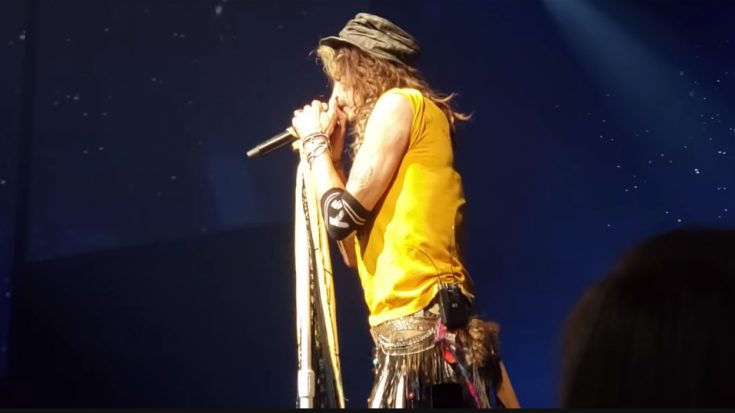 With Aerosmith dominating Park Theater in Vegas’ Park MGM Resort, it’s been a good time for both the band and the fans. The Deuces Are Wild residency of the boys from Boston proved to be successful, with almost full venues for just the beginning of the 46 (from 35) date stint. This will cover dates from early April, up until early of December, with dates added due to insistent public demand. This is Aerosmith’s first concert residency, and it’s looking like sunshine and clear skies for them already!

Steven Tyler, Aerosmith’s iconic rocker frontman, is known for sporting unconventional outfits in their performances. But it doesn’t mean he can’t slay with these outfits. Tyler was spotted earlier wearing a man-skirt, and now he’s been spotted with a rather eccentric pair of pants. On the April 15th show of the band, fans couldn’t help but notice another addition to Tyler’s gallery of unique, yet stylish wardrobe choices. Tyler posted it on his Twitter account, the world bearing witness to his bizarre fashion sense.

THE LIGHT AT THE END OF THE TUNNEL…WELL I GUESS THIS TIME IT WAS ME GUYS…😂 (( I KID I KID )) WHEN ARE YOU COMING TO SHED SOME LIGHT ON THE SUBJECT???#DEUCESAREWILD 📷@JustinMcConney pic.twitter.com/CgNB6K1z7i

Steven Tyler is known to deliver quite the fanservice, especially in social media. In another comic tweet by Tyler, he can be seen holding a mic stand with a hint of green comedy in it.

I KNOW WHAT YOU ARE THINKING- IS THAT A BIG MIC STAND OR AM I JUST EXCITED TO SEE YOU- THE ANSWER IS BOTH!!!! 📷@KatBenzova pic.twitter.com/mU4UPcKxe1

The Aerosmith frontman sure knows how to have a good time with himself and his fans. With their Vegas residency under way, it seems that the band is enjoying their stay in Sin City, considering they have recently finished the first leg of their concert series. The bad boys of Boston still have a lot left on their plate, but boy are they putting up a show!

Don’t believe us? Watch Aerosmith’s performance of “Dream On” for the opening night of the Deuces are Wild residency and decide for yourself!