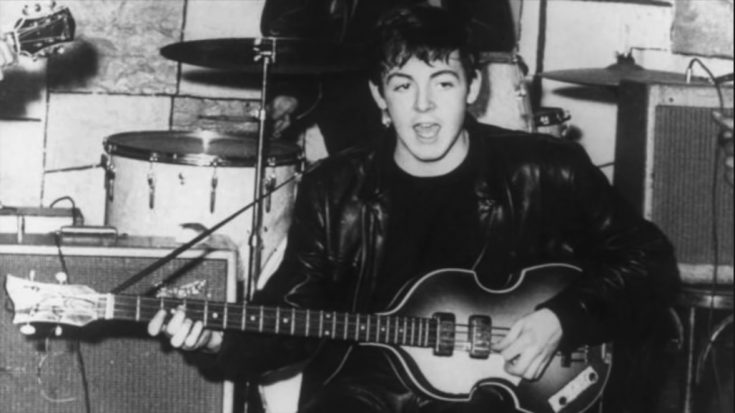 Upon the departure of the original Beatle bass player Stuart Sutcliffe, the then 5-piece group became 4. Moreover, it became a problem in the group to find a suitable replacement for Sutcliffe in the bass duties, and so the band decided to let a hesitant Paul McCartney fill in.

McCartney recalled why he didn’t like the idea of playing bass, and how he was forced to do it: “Bass was the thing that the fat boys got lumbered with and were asked to stand at the back and play, so I definitely didn’t want to do it. But Stuart left, and I got lumbered with it.” But later on, he was more than thankful for his decision to play the instrument.

From the moment he replaced Sutcliffe, McCartney was on a mission to find the best bass for him. Best meant that he wouldn’t have a difficult time playing it, and with his then-financial situation, a cheap one as well.

“I remember going along there, and there was this bass which was quite cheap,” the musician said. “I couldn’t afford a Fender. Fenders even then seemed to be about £100.”

However, upon scouring some other cheaper brands, he found himself a £30 Höfner violin bass that was suitable for him in many ways. “It seemed like because I was left-handed, it looked less daft because it was symmetrical,” he added. “Didn’t look as bad as a cutaway which was the wrong way. So I got into that.”

For years then on, the Höfner brand became easily associated with McCartney’s name. And to this day, he still uses it in his concerts, proof that no amount of wealth or fame could dictate sir Paul McCartney’s choice for bass.

Here’s Paul playing his signature Höfner bass in a video presented below.