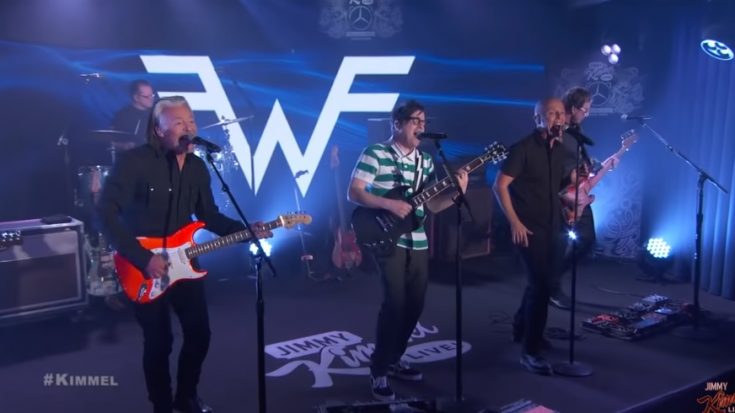 American pop rock band Weezer paid homage to classic musical hits with their 2019 release of The Teal Album. Songs from the 60’s up to the 90’s were meticulously compiled into cover performances by the band. Weezer stayed true and loyal to the source material with the album, and faithfully delivered. The band kept the original arrangements with their own personal tweaks, and successfully infused the signature Weezer sound to these tracks.

In a recent episode of Jimmy Kimmel’s Mercedes-Benz Concert series, Weezer made an appearance with a very special guest. The band performed “Everybody Wants To Rule The World” with nobody else but the song’s original artist, the iconic Tears for Fears! Tears for Fears, now a duo, must’ve appreciated the cover enough to warrant their attendance in the Weezer number. With host Jimmy Kimmel introducing the two bands generously, the middle-aged audiences were surely riled up for the epic collaboration.

The performance brought us back again to the 80’s, the signature calming intro sending waves of zen throughout the crowd. Curt Smith still has that suave tone that made girls go crazy for the band back in the day. Roland Orzabal shows of the groove of his guitar progressions as well, adding to the lulling symphony of the track. Weezer frontman Rivers Cuomo comes in to deliver his parts with the same smoothness of Smith’s delivery. The two lead singers then proceed to harmonize, and harmonize they did. Though their voice qualities were similar, the two masterfully layered then alternated vocal parts, which resulted to an amazing blend of notes.

Props to Weezer for reviving these vintage masterpieces back in the limelight. With today’s musical quality going downhill, except for a handful of acts, it feels good to have bands like Tears for Fears get more attention in the modern setting. Check out Weezer’s The Teal Album below for a blast from the past!