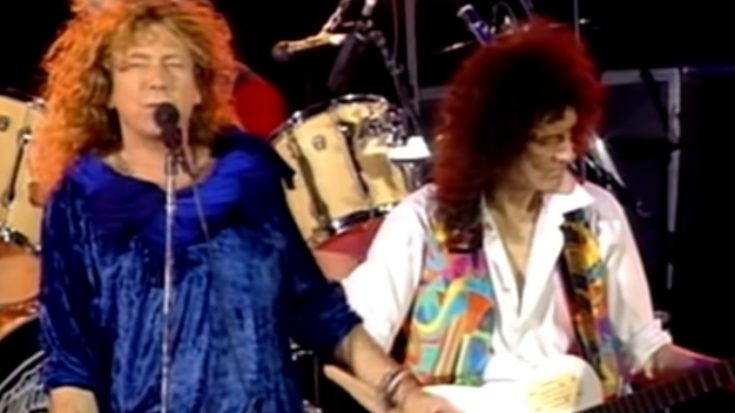 Losing Freddie Mercury from the long battle of AIDS has got to be one of the biggest shocks in the history of music. The legendary frontman of Queen created a mark in the rock genre with his extravagant songs, his energetic presence onstage, and flamboyant elegance. So, when the remaining members decided to pay tribute to their great friend to celebrate his contribution to the music industry, as well as to raise awareness on the disease, it was decided to call the greatest rockers at this point. One of the performers was, in fact, Led Zeppelin’s Robert Plant.

Plant started to loosen the performance with an introduction of Zeppelin’s “Thank You”, in a mellow tune. Slowly shifting to another arrangement, the legends started to draw out Queen’s rockabilly song, “Crazy Little Thing Called Love”, in a full manner. Queen, still fresh from the wounds of Mercury’s passing, looked like they cannot fully enjoy the blissful performance, so Plant held the liveliness in full favor. His energetic rendition to the song, as well as his typical cheery presence onstage, could lift the sadness ever for a little bit. It’s indeed a remarkable moment for a legend to give respect to another legend.