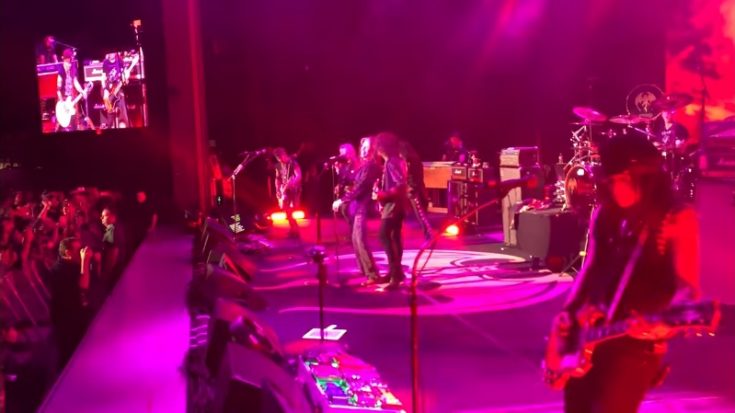 American rock supergroup Hollywood Vampires, comprised of shock rock progenitor Alice Cooper, Aerosmith’s lead guitarist Joe Perry, and acclaimed actor Johnny Depp, initiated their seven-date tour on the 10th of May in Las Vegas. After the successful show starter by the band, they headed to Los Angeles, featuring a star-studded rock performance at The Greek Theatre that delighted fans who attended.

After the conclusion of the band’s one set performance, the audience was caught unaware when rocker Marilyn Manson was called from backstage to perform a number of Alice Cooper’s 1971 Love It To Death hit, “I’m Eighteen“. While the fans highly enjoyed Manson’s appearance in the middle of the performance, it wasn’t the only surprise in store for the crowd that night. After the song, Hollywood Vampires heralded Joe Perry’s “Toxic Twin” and Aerosmith’s vocalist, Steven Tyler. Tyler performed a Tiny Bradshaw classic, “The Train Kept A-Rollin'”, which was also recorded by Aerosmith and released with their second album, Get Your Wings of 1974.

Prior to the collaboration performances with the guests, the band dished out some intense rock material, a fusion of their original creations, and some covers of classic rock songs. The opening night was initiated with a sneak peek from their soon-to-launch album by June, Rise, with the songs “I Want My Now“, “Raise The Dead“, and “As Bad As I Am“. For most part the show, however, was comprised of cover performances, with tracks from The Doors, AC/DC, The Who, and Bowie, among others. The encore saw “We Gotta Rise“, and another Cooper staple in the name of “School’s Out“, which the band added with a touch of Pink Floyd’s “Another Brick In The Wall“.

Cooper described the Rise album as, “Rise is not only a totally different animal than the first Vampires album, it is unique to anything I’ve ever been a part of. I approached it very differently than I usually do when working on an album. Each of us; Joe, Johnny, Tommy and myself have written songs on this album. What is different though is that I didn’t try to change any songs to be more ‘Alice-like.’”