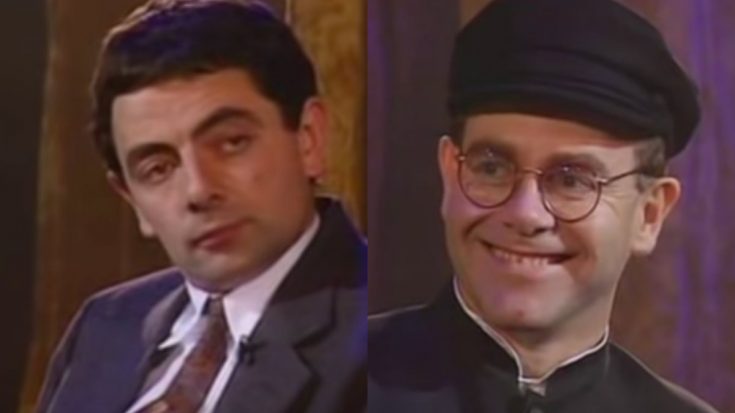 The global comedic sensation Mr. Bean, played by the great British comedian Rowan Atkinson, appeared as an interviewer for Sir Elton John for a funny skit they did in 1991.

Although the interview itself was done 28 years ago, it’s still as hilarious as it can be, with two British icons of their respective industries coming together, it’s certainly a delight for audiences of all generations.

This outstanding comical performance of Mr. Atkinson features a faux interview with Elton John in which Atkinson asks him a handful of very unusual questions that Elton John was sport enough to ride on. It’s incredible how the then-44 year old singing sensation kept a straight face all throughout the skit! The natural reaction to Mr. Atkinson’s antics would definitely be to burst out in laughter.

This skit-interview would be the original “Between Two Ferns” talk show where comedian Zach Galifianakis stars in a Funny or Die Segment. The modern online talk show is known for its irreverent style and deadpan humor, interviewing high-profile guests but asking them baffling and unusual, sometimes bordering on insulting questions.

This particular interview with Atkinson and John was filmed at a benefit comedy show supporting HIV/AIDS awareness.

“Funny name. ‘Elton,’” Atkinson says to John. “Did you ever consider ‘John Elton’?”

At the end of the skit, they had to do a fake gun shooting bit, probably to let the audience know that this interview, really, is not a real one. Peak British humor at its finest.

Watch the hilarious “interview” below: