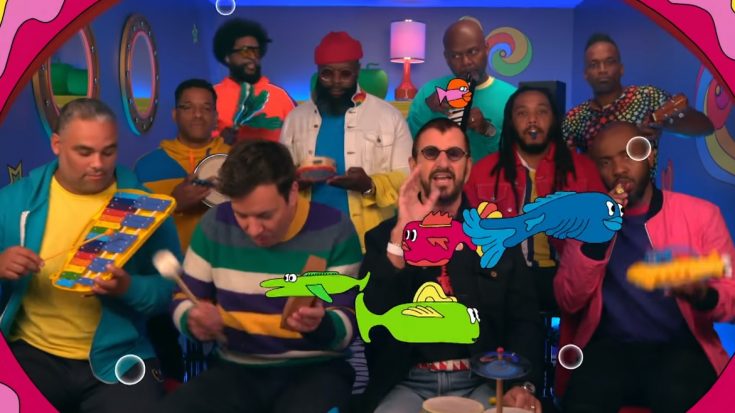 In the latest installment of The Tonight Show’s Classroom Instruments segment, Jimmy Fallon managed to get the iconic Beatles drummer Ringo Starr on the show. Together with the homecourt band The Roots and Fallon himself, Starr performed “Yellow Submarine” with nothing more than a plastic horn, a melodica, a toy drum set, and a yellow submarine shaker, among others.

The Beatles classic was released as a double A-side with the haunting “Eleanor Rigby”, and was composed by the Lennon-McCartney duo that became the bestselling single in the UK that year, keeping its place on top of the charts for a good 13 weeks. In the US, the song placed 2nd, and remains to be the bestselling song by the Fab Four with Ringo Starr on lead vocals.

Starr is also set to release his new solo album, What’s My Name, on the 25th of October, and will feature a cover version of John Lennon’s “Grow Old With Me” with Paul McCartney on tow. He admitted that he only heard the song recently, when he was offered the opportunity to take a listen at Lennon’s archived records. “I sang it the best that I could,” Starr said. “I do well up when I think of John this deeply. And I’ve done my best. We’ve done our best. Paul came over and he played bass and sings a little bit on this with me. So, John’s on, in a way. I’m on it and Paul’s on it. It’s not a publicity stunt. This is just what I wanted. And the strings … if you really listen, they do one line from ‘Here Comes the Sun.’ So in a way, it’s the four of us.”

Watch the performance on the video below!