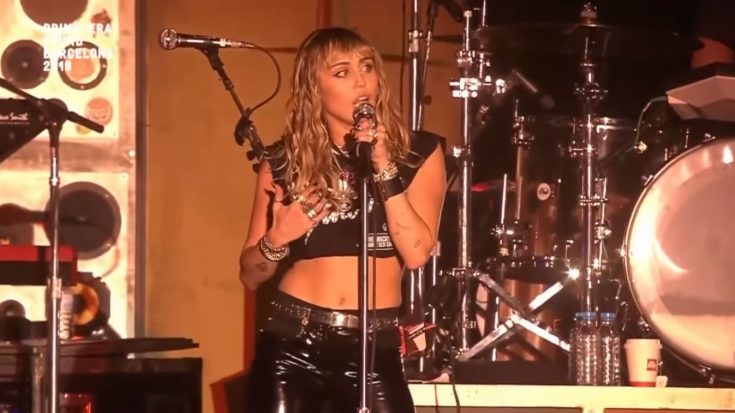 Pop singer and icon Miley Cyrus listens to a lot of classic rock, apparently, as she just covered Led Zeppelin and Pink Floyd, with “Black Dog” and “Comfortably Numb” during her set at the iHeartRadio Festival in Las Vegas.

Cyrus has been known for covering rock music, especially by legends such as Metallica, when she did “Nothing Else Matters”, or Nine Inch Nails’ “Head Like A Hole”. She has even done tracks by Chris Cornell and Paul Simon as well.

In an interview with Elle, Miley Cyrus says that this kind of heavy music helps in developing a confident sense of self, saying, “I think now I actually have the respect that I want. When I walk into a room, people may think, ‘Okay, she gets her tits out.’ But they also think, ‘But she’s got a fucking sick voice,’ and that’s all I care about.”

She admitted that she had difficulty in establishing her own identity, knowing her pop roots since her youth. “I tried to go to therapy a few times. And they treated me like I was everyone else who sits on the couch. They’d be like, ‘Well, you probably feel paranoid because you’re smoking weed.’ And it’s like, ‘No, I feel paranoid because people are putting little drones in my backyard,’” Miley shared.

“One time I was naked on top of a fake horse when a drone showed up,” Cyrus continued. “And I’m like, ‘Honestly, I couldn’t have asked for a better time.’ At least I wasn’t sitting there drinking coffee, being boring. But now I think it’s kind of uninteresting for people to see me rebel.”