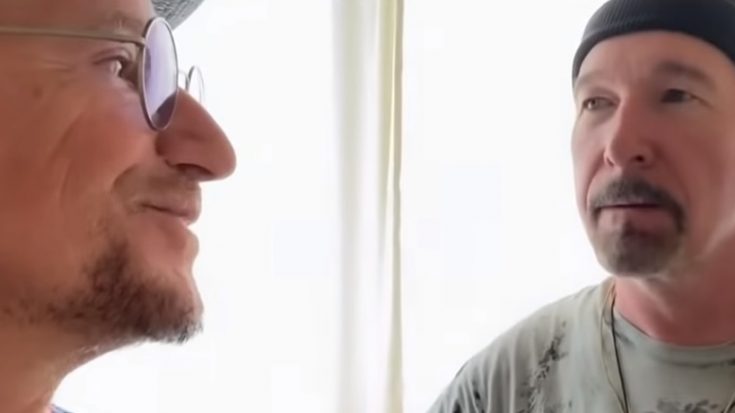 Bono and The Edge covers "Stairway To Heaven" - Dexmusic / Youtube

U2 has been quite busy the past few weeks as an effort to focus on the launch of their SiriusXM channel, U2 X-Radio, but frontman Bono and guitarist The Edge managed to take a short break and give thanks to their loyal road crew with a short cover of Led Zeppelin’s “Stairway To Heaven”, which was also uploaded to Youtube.

“There’s one annoying aspect of an Irish crew that has to be said. Wherever you go in the world, whatever venue you’re playing — whether it’s the Olympia or 3 Arena or Madison Square Garden — you walk into the venue and it’s a big moment, and you’ll hear a song that we said, ‘We’ll never, ever play this.’ And that’s right, ‘Stairway to Heaven.’ These professionals believe they play this better than the band. And you know, it might be true,” Bono said.

The band has been known to play the Led Zeppelin hit during soundcheck and snippets of it during live shows, but this is the first time that the musicians featured it in an uninterrupted manner, albeit brief and stripped.

U2 is also gearing up for the next album to 2018’s Songs of Experience, with Adam Clayton disclosing to Rolling Stone that “There’s an album ready to be completed. It’s very, very fresh. We’ve cut everything quite quickly. We’re coming to things in a shorthand way. The feedback we get from that is pretty good. We want to be quick, down and dirty with the next one.”