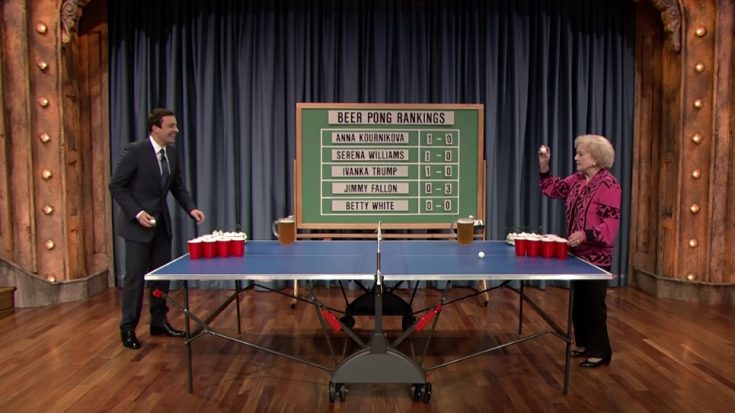 Let’s take a moment and reminisce one of the iconic moments in the history of television; when legendary TV personality Betty White played beer pong with The Tonight Show host, Jimmy Fallon.

The beloved Golden Girl died at the age of 99 due to a stroke she suffered from six days before her devastating death on December 31 last year. Family, friends, and celebrities all came together to pay tribute to the loss of American’s favorite actress in different sorts of ways, including this clip from Jimmy Fallon’s The Tonight Show.

The YouTube video has an enclosed caption, saying: “Jimmy and Betty White square off in two games of beer pong on Late Night with Jimmy Fallon (Original Air Dates: June 2009, May 2010).”

Albeit being totally cool and sport about it, Betty White lost twice to Fallon, although, she did kickstart the game by throwing the first pong to Fallon’s cup. On her 2nd beer pong appearance, White called out the host by jokingly yelling, “You cheated!” to Fallon. She was getting pretty good at throwing the ping-pong balls on the 2nd time, and that’s all that matters.