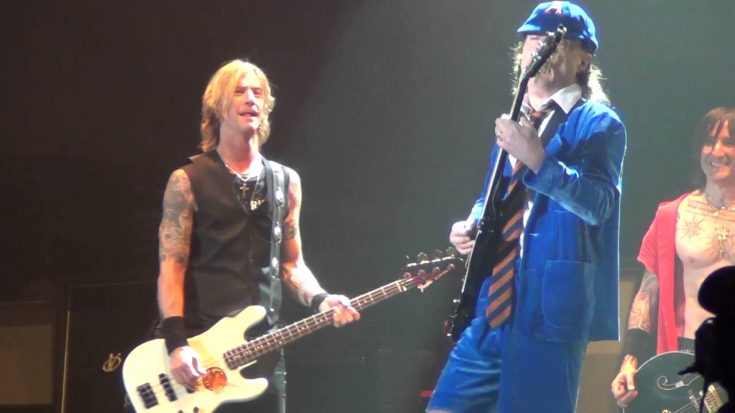 It’s no secret to know that AC/DC and Guns N’ Roses have a much larger appreciation for each other’s work. Not only that they frequently use the other’s songs during live shows, but they also were more than happy to join the other to conclude a perfectly great performance.

Before Axl Rose joined AC/DC’s remaining tour dates that made possible due to Brian Johnson’s withdrawal for hearing issues, it was decided that it would be perfect for the fans to give a sneak peek at what’s about to happen for the rumored d Axl/DC collaboration. AC/DC’s lead guitarist, Angus Young joined them for a loud and inexplicably great version of “Whole Lotta Rosie” and “Riff Raff.”

It was a highly-anticipated reunion of Guns N’ Roses, with Slash, Axl Rose, and Duff McKagan present to complete the classic line-up in the 2016 Coachella. Seated on the “rock and roll throne,” Rose was not on his typical, energetic self who used to run on stages. “I do feel bad about sitting here on my ass,” he said. To make things better, he has a special guest who will be responsible to liven things up—and that was Young’s clue to join the group.

With no doubt, Angus Young did what Axl initially said before his enter: he did make the concert a whole lot greater than what’s expected.

Watch their performance below.