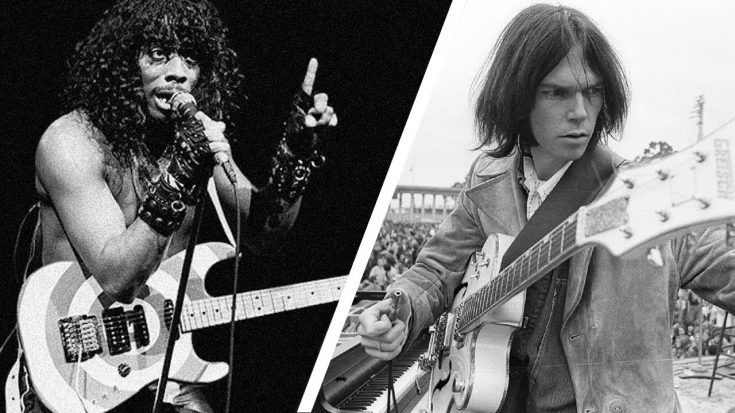 It’s almost impossible to believe that Neil Young and Rick James once shared an adventurous time at the beginning of their music career. Who would have thought that the classic rocker Neil Young and the righteous funk singer Rick James would end up in a band together, share an apartment, and create a classic Motown song?

It all started when Neil Young wanted to chase the dreams of becoming a bonafide artist, wandering the towns of Canada when he passed around Toronto and made friends with Bruce Palmer. Palmer convinced the troubadour to join his R&B and rock band, The Mynah Birds, to which Young agreed.

At this moment, the band was deeply enthused with every Rolling Stones’ record, and the music that they did was cut from the cloth of these British rock & rollers. Like the Rolling Stones, the band has its own energetic and charismatic lead singer by the name of Ricky James Matthews.

Matthews wanted to avoid serving the navy, so he instead went to Canada, and became the frontman of Mynah Birds, and his backstory was kept secret even to his band members. For the brief moment that Matthews lived in Toronto, he became roommates with Neil Young, and live a hedonistic lifestyle that even Young couldn’t seem to remember. By then, the Mynah Birds released their double A-side, “The Mynah Bird Hop”/ “The Mynah Bird Song,” and was promised a deal with Motown.

But all went downhill when their manager “lost” the band’s money that led to his firing. The manager, angered with the sudden dismissal, slipped the rumor that Ricky was an AWOL officer in the navy, and Matthews was quickly taken unto custody. With no manager and frontman, the album was canceled and led Young and Palmer to create a much more iconic group, the Buffalo Springfield.