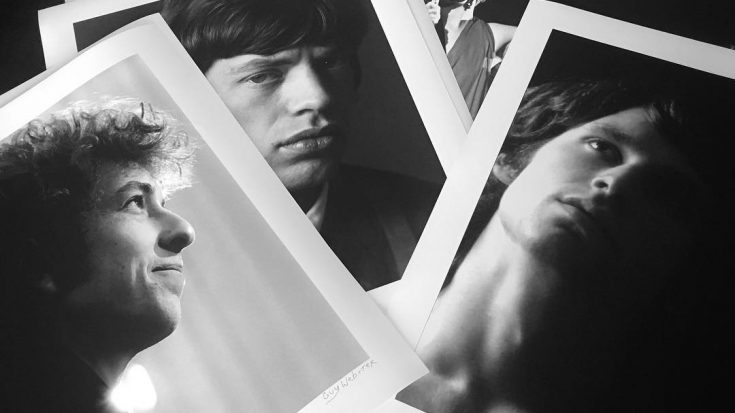 Guy Webster is behind the lens of some of your favorite and most recognizable music portraits ever snapped. His start in Hollywood comes from before adulthood, rooting back to his father. Paul Francis Webster was a lyricist who had won three Oscars for Best Original Song for “Secret Love,” “Love Is a Many Splondored Thing,” and “The Shadow of Your Smile”- which also won him a Grammy for Song of The Year.

Guy Webster followed in his father’s showbiz steps by turning his dream into a successful photography career. Guy’s most famous album covers include: The Doors’ debut album, The Byrd’s “Turn, Turn, Turn,” Simon and Garfunkel’s “Sound of Silence,” The Rolling Stones’ “High Tide & Green Grass,” The Mamas and The Papas’ “Deliver,” and several other recognizable images spreading from rock to film.

The truth is, photography and rock ‘n’ roll are vital to each other. Rock needs the pictorial imagery for  proof of it’s impact and photography needs the  incendiary fuel to burn an archival furnace of ocular art. Guy Webster was able to fuse both ideals of rock and photography into a call to action. He was always at the right place and at the right time- with the music industry making sure of it.

In an interview with journalist Harvey Kubernik Webster said, “I never meant to be a commercial photographer. I was going to be a fine art photographer. (Record producer) Terry Melcher said, ‘Hey, let’s do an album cover for The Rip Chords.” And I was still in school. It was for their Three Window Coupe album, with their song ‘Hey Little Cobra.’ … Terry actually got me started thinking, ‘I can shoot some album covers and make some money.’”

It takes a combination of sensory triggering actions to solidify a rock musician’s legacy. There needs to be an outstanding work of music, an enigmatic portrayal of self, and a visual stamp of what the musician stands for. Webster was able to portray the indescribable into a clear emotion- shown in his photography. Whatever a writer was incapable of describing, he could describe in a photo. Therefore, the music world revered his work.

Webster’s daughter Sara stated in an interview with Variety, “My dad was loved by all. He was a peoples person and touched the lives of so many. He will be greatly missed and we are heart stricken that he left us so prematurely but rejoice in the thought that he had a f–ing awesome life!”

“They were educated. We spent the day together, we had a great time… I take them over to meet my parents… and Paul went nuts because my father had all of (Charles) Dicken’s first editions. Paul says ‘Would you like to hear our song?’ So he goes out to his car and brings out a full guitar and the two sing “Sound of Silence,” privately to my father and me,”  Webster says of his fond memories with Simon and Garfunkel.

Watch a video including the back story of some of Webster’s most famed photographs for the LA Review of Books, all in his own words… below.