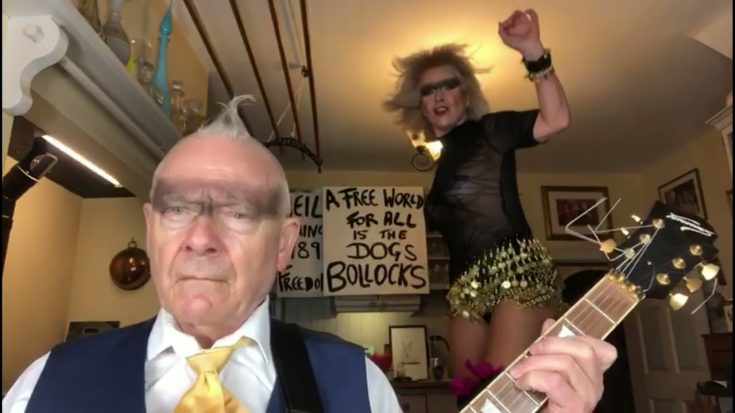 Watch the entertaining performance of Robert Fripp and his wife, singer Toyah Wilcox as they perform a cover of a Neil Young classic, “Rockin’ In The Free World.”

The duo performed the song in support of Ukraine’s fight over Russia, with Fripp wearing what seemed to be the colors of the Ukraine flag: yellow and blue. Toyah, on the other hand, wore a black ensemble with a gold skirt which looks like a percussion.

The song is among the many covers of the two for their Sunday Lunch YouTube series, which started at the height of the 2020 pandemic. Almost two years since it started, they have covered multiple artists such as Nirvana, Alice Cooper, David Bowie, Rolling Stones, Judas Priest, the Ramones, Metallica, Guns N’ Roses, and many more.

“Rockin’ In The Free World” was penned by Neil Young in 1989 and is often considered as one of the rocker’s best pieces. It was a single from his album, Freedom, and the song’s title was conceived when Young’s guitarist Frank Sampedro said “We’ll have to keep on rockin’ in the free world,” after they learned that Young’s team were no longer allowed to enter the Soviet Union for a planned concert.

Indeed, Toyah and Robert’s video is a sentiment to Ukraine’s resistance to Russia. The duo also hung posters on the wall that read: “A free world for all is the dog bollocks” and “Neil Young. 1989. Freedom.”