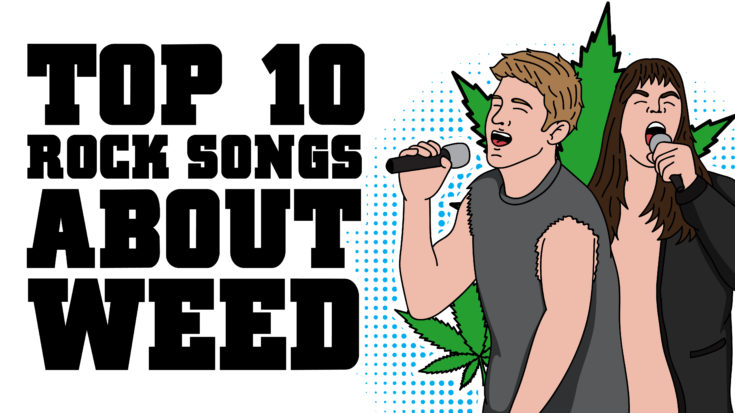 We know we’re way far behind 4/20 but hey, everyday’s a celebration for stoners. To be fair though, we live in a pretty weird time – there are strange holidays we never thought existed like Penguin Awareness Day, Hot Sauce Day and even Eat Ice Cream for Breakfast Day. And how can we forget the celebration in honor of that little green plant which everyone practically showers with praises?

Let’s skip the statistics but we guess it’s safe to assume every single rockstar we know have at least tried cannabis. “Try” is actually an understatement. They’ve led a life of excesses and with so many crazy things going on for them, sometimes they de-stress by lighting one up and getting high.

Rock ‘n roll isn’t complete with themes of sex and drugs. And the following songs pay homage to the almighty weed.

This is the essential stoner’s song because it just feels so light and happy. There’s no drama, just plain fun music. And Tom Petty wasn’t into subtlety because he doesn’t beat around the bush as he sings “But let me get to the point / Let’s roll another joint…” Yep, he’s pretty straightforward with his intentions.

“I wrote this song a while back and I was trying to do this character in the song who was kind of down and looking for some company. And instead of having him say, ‘Let’s have another beer’ – they always have to have that in the song – I thought this guy should roll another joint.” – Tom Petty

The thing is, MTV and some radio stations decided to censor the song because of that specific line we mentioned above. And the censorship kind of destroyed the song – some versions removed “roll” while others changed it to “hit” AND the word “joint” was played backwards.

The reversed version sounded gibberish. But hey at least we get to listen to the uncensored one today.

9. Neil Young – “Roll Another Number for the Road”

If you’re feeling lazy but still high, this is the best tune to plug in. What’s ironic here is while this is Neil Young’s “farewell” to all things that were associated with the Woodstock culture, hippies still loved it. And we’d go so far as call it some sort of anthem for these fellas. We can only imagine Young’s further loathing when he found out.

“I’m not a junkie and I won’t even try it out to check out what it’s like. But we all got high enough right out there on the edge where we felt wide-open to the whole mood. It was spooky. I probably felt this album more than anything else I’ve ever done.” – Neil Young on his “Tonight’s the Night” album

It’s a lazy, feel-good song but while it has a certain appeal to some, it’s an acquired taste for others. Sure, it may not be Neil’s best song but hey, stoners aren’t choosy. Besides, you gotta love the feel of something raw and authentic about it.

In a nutshell, the song is about a truck driver who smuggles “smokes and folks” from Mexico across the border for some extra money. And what does cannabis have to do with it? Check out the line “And if you give me weed, whites, and wine / Then you show me a sign / I’ll be willin’ to be movin’..” Well it seems the guy accepts several forms of payment.

Fun Fact: Jimmy Page is a fan of Little Feat and one time, one of his neighbors complained that he was “playing Little Feat records too loud.” In the same interview with the Rolling Stone magazine, he said “Band-wise, Little Feat is my favorite American group.”

Just listening to this track alone is enough to get you high. Oh wait, maybe not. Either way, it’s a great song with a rich and sweet sound. It’s pretty addicting too – you can’t listen to it just once.

And the most obvious weed song award goes to – drum roll please – Black Sabbath. This is probably one of their few songs that doesn’t sound menacing and dark. And in fact, it’s almost like a love song. From the first verses, you’d think Ozzy Osbourne’s serenading some lovely lady. That is, until you hear him sing “My life is free now, my life is clear / I love you sweet leaf, though you can’t hear…”

Well that’s obviously the closest thing to Ozzy being romantic and all. He’s professing his love – never mind that it’s actually to a cannabis.

“Yeah the name “Sweet Leaf” came from the [Irish brand of] cigarettes called Sweet Afton. I’d just come back from Dublin. Everyone smoked back then, so I’d be offering them all cigarettes. You’d open the top of the package and it said something like, “It’s the sweet leaf.” I thought, Hmmm, That’s a good title.” – Geezer Butler

That certainly settled it. It’s a cigarette but the band also admitted that “Sweet Leaf” is an accurate description of weed. So…

Get this, during the recording, Bob Dylan and the other musicians and personnel in the studio were passing around some joint. It probably sounds chaotic all over the place – from the men shouting in the background to Dylan laughing. What would you expect? They were getting high and they smoked so much that they “got pretty wiped out.”

It’s controversial because of the verse “Everybody must get stoned.” But according to Bob Dylan, “I never have and never will write a drug song.”

“In the shifting multi-level jargon of teenagers, ‘to get stoned’ does not mean to get drunk but to get high on drugs… a ‘rainy-day woman’, as any junkie [sic] knows, is a marijuana cigarette.” – TIME Magazine

Even though it was a big hit back when it was released, some Dylan fans feel like it’s one of his worst works ever. We actually have a love-hate relationship with it because as a standalone track, it’s fun to listen to. But when you compare it to his other songs, it doesn’t even come close.

We see what you did there Paul, and so did BBC. But you know, while BBC assumed the “Hi, Hi, Hi” part was referring to drugs, that’s not the main reason why this song was banned in the UK. It was actually because of the line “get you ready for my body gun….” which was too sexually suggestive for them.

According to Paul, it’s “polygon” and not “body gun” if that makes any sense.

“I suppose it is a bit of a dirty song if sex is dirty and naughty. I was in a sensuous mood in Spain when I wrote it. To me, it was just a song to close our act and since it went down well when we toured the Continent, I thought it would be a good single. I think it’s the best single we’ve done as Wings.” – Paul McCartney

What could be more rock ‘n roll than sex and drugs, right? It was also partly inspired by Bob Dylan’s “Rainy Day Women #12 & 35”and how the “ambiguity” became part of the selling point. Keep in mind too that Paul isn’t really shy about his love for weed.

Minus the line “I’m a midnight toker” which is obviously a nod to all stoners everywhere, this is an interesting song and was pivotal in Steve Miller’s music career.

First off, the phrase “pompatus of love” seems nonsensical. Some say, Steve merely invented the word while there are those who pointed out that it meant “to act with pomp and splendor.” Also, almost every line references some of Steve’s other songs – this is the classic equivalent of liking your own status. But seriously, it’s kind of impressive.

“I got this funny, lazy, sexy little tune but it didn’t come together until a party in Novato, north of San Francisco. I sat on the hood of a car under the stars with an acoustic guitar making up lyrics and ‘I’m a joker, I’m a smoker, ‘I’m a midnight toker’ came out.” – Steve Miller

It’s one of the most commercially successful songs about pot and mind you, that is quite an accomplishment. Like for real, there are probably hundreds of stoner tracks but “The Joker” takes the cake.

Steven Tyler singing about drugs – what? Let’s be honest, the man has probably smoked more weed than the average stoner. When they were on top of the world, cannabis was probably like candy – available 24/7 and they can get as much as they want.

“Just to get half as high” is pretty straightforward – but it’s most likely he’s not just talking about marijuana. As we said, it’s easy to find drugs when you’re a huge rockstar like Steven and the rest of the Aerosmith boys.

“’Reefer Head Woman’ was a 1940s blues record. I had the lyrics in a notebook that got stolen, and I had to call Dr. Demento from the Record Plant, where we finished the album, and the Doctor read the lyrics to me over the phone.” – Steven Tyler

We know it’s not their finest musical moment but it’s still a good song recorded for the love of cannabis.

The love song to end all love songs – and it’s for weed. We totally understand if it’s baffling for you because other stoner tracks explicitly mention getting high or whatever but when you read the lyrics to “Got To Get You Into My Life,” there’s not much giveaway.

But it was Paul McCartney himself who confirmed the actual meaning of the song.

“So Got To Get You Into My Life is really a song about that, it’s not to a person, it’s actually about pot. It’s saying, I’m going to do this. This is not a bad idea. So it’s actually an ode to pot, like someone else might write an ode to chocolate or a good claret.” – Paul McCartney

Yep, Paul made it pretty clear. So you’d think he has so much love for weed that he actually made a huge hit out of it. That’s the thing about great songwriters, they can write about cannabis and get away with it. It’s Paul McCartney, people.

How can we forget The Doors’ signature song and most successful track ever? You probably already know this one because the band’s performance during their appearance at The Ed Sullivan Show sparked some controversy.

“It was exactly what we were doing at the time at Whisky a Go Go – letting the music take us wherever it might lead in a particular performance, just improvising. And that’s exactly the same way that solo came about.” – Rey Manzarek

It’s an epic masterpiece and there’s a reason why everyone (yes, stoners included) still love it even after all these years. Is it the ultimate weed song? Maybe, and it never gets old too.