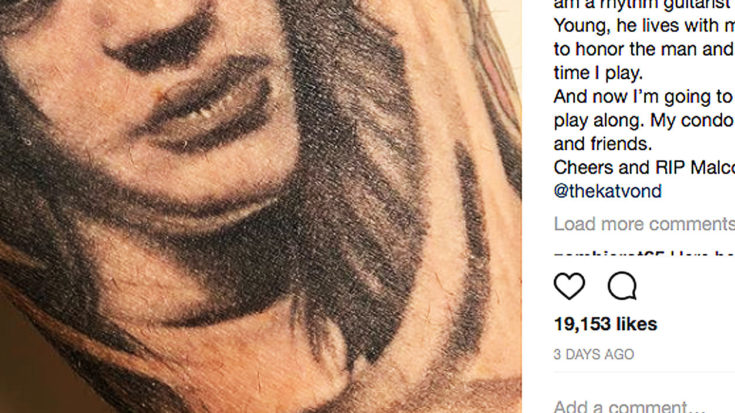 From One Great Guitarist To Another…

We are just days removed from the passing of one of the all-time greatest guitarists that has ever picked up a six string axe, AC/DC’s Malcolm Young. It goes without saying that while being one of the most criminally underrated musicians of all time he was also (and still is) one of the most important. Malcolm Young was the driving force behind AC/DC – the foundation of the band.

Despite being as underrated as he was, many fellow musicians still acknowledge his contributions to rock music. Needless to say, Malcolm was a pillar in the rock & roll community; establishing the groundwork for one of the greatest rock bands ever. One such musician that recognizes this more than most is Anthrax guitarist Scott Ian.

In a heartfelt Instagram post, Scott wrote a touching tribute to Malcolm explaining just what he meant to him, and even showed off a stellar portrait tattoo of him. Many rock legends have come out of the woodwork to pay homage to Malcolm Young, but this one truly stands out more than most. See for yourself!

Malcolm had an intensely powerful, percussive and economic style of playing that made him the greatest rhythm guitarist of all time. His uncanny ability to wring only the necessary notes out of his Gretsch was what made AC/DC – his riffs, feel and tone the soul of that band. What he means to me is unquantifiable. I am a rhythm guitarist because of Malcolm Young, he lives with me always and I hope to honor the man and his legacy every time I play. And now I’m going to crank Riff Raff and play along. My condolences to his family and friends. Cheers and RIP Malcolm Young. Tattoo by @thekatvond