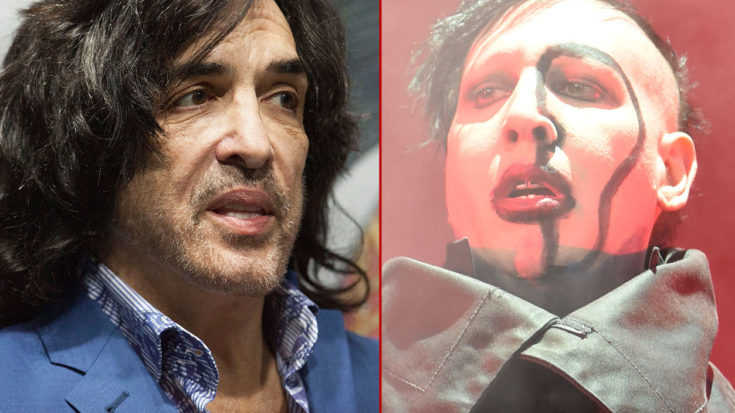 Some are relieved that Charles Manson is dead. Many others, like KISS alumni Paul Stanley, are understandably furious that he got to live to old age, dying of natural causes when the people murdered at his direction – including actress Sharon Tate’s unborn child – were denied that right.

In some cases, feelings are a little hard to pin down as in the case of shock rocker Marilyn Manson; born Brian Hugh Warner, Manson’s stage name is a nod to late Hollywood bombshell Marilyn Monroe and Charles Manson, leaving people more than a little curious as to what, if any, his reaction to the former cult leader’s death would be.

Manson’s tweet, posted shortly after news that Charles Manson had died, was simple; a photo of Manson bearing the word “LIE” and a link to a cover of his song “Sick City”. Stanley responded the next day, slamming Manson as ‘pathetic’ and attention seeking:

Pathetic when somebody who’s career never really took off is desperate enough to try for publicity by connecting himself to the news of a murdering scumbag’s death. @RollingStone @UltClassicRock https://t.co/SShmw5Wmse

“Pathetic when somebody who’s [sic] career never really took off is desperate enough to try for publicity by connecting himself to the news of a murdering scumbag’s death,” he wrote.

I was so happy to hear of his big cross falling on him a few weeks ago. Karma for his post on Manson could be worse.

Others, however, were quick to disagree, calling attention to Marilyn Manson’s musical career – others were even quicker to take shots at Stanley’s own career.

@kroq since paul blocked me on my original twitter, I‘ll post it again. Manson is a legend. pic.twitter.com/i2PDdYfsZP

Interesting words from NOT @genesimmons… Ya know the only member who's career did take off as you put it. @marilynmanson is known for shocking commentary, with so many others capitalizing on Charlie's death its only fitting he would do a cover song. Stop #tryingtostayrelevant

No offense, even though his post was ill timed.
Marilyn is making new music in a dying industry and you're not. You just said let Gene be who he is, why isn't it the same for Marilyn Manson?

Manson has yet to reply to Stanley, though if he does, we’re sure it’s going to be entertaining.