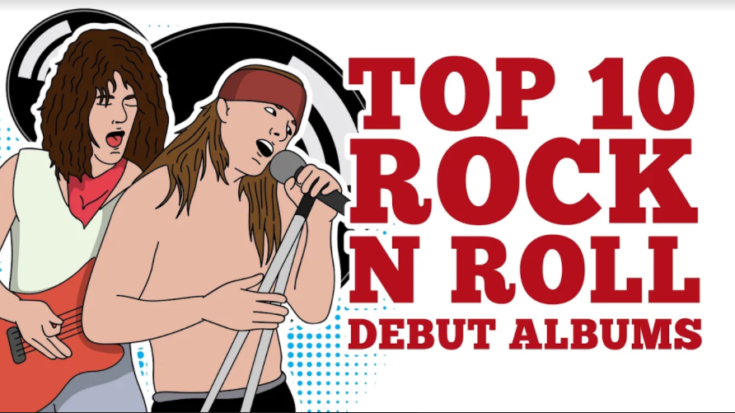 Legends From The Start

This is how you kickstart your career in rock. The fact that these albums nailed it from the get-go is an accomplishment all by itself because let’s be honest, it’s not easy. Some struggle for years to get it right – there are even those who truly “arrive” in their fourth or fifth record. But that’s not the case with the following artists.

They found their sound and announced their arrival to the music scene in a spectacular fashion – the album features epic masterpieces and probably the band’s signature hits too. Either way, they most likely earned a cult following after its release. For some, it’s their greatest album while for others, it was only the beginning and the best is yet to come.

Now let’s look back at these debut albums that every classic rock fan knows by heart.

This is Guns ‘n Roses at their absolute best. It’s not just one of the greatest debut albums of all time, it’s also the biggest selling with more than 30 million copies sold worldwide. Talk about massive commercial success!

From Axl Rose to Slash, they were at their prime and that raw energy took “Appetite for Destruction” to another level. Listening to it is an adrenaline-pumping, mind-blowing experience.

“The debut from Guns N’ Roses was a watershed moment in ’80s rock that chronicled every vice of Los Angeles led by the lye-voiced Axl Rose and a legendary, switchblade-sharp band.” – Pitchfork’s Maura Johnston

From “Paradise City” to “Welcome to the Jungle” and “Sweet Child O’ Mine,” there’s so much to love about this album. The attitude and angst remains unmatched and no, it’s not for the faint of heart. Axl Rose and the rest of the boys left everyone in the dust.

The ‘70s was a highly diverse and colorful time in music. It was hard to get noticed and stay ahead of other bands. The Cars, however, had no problem doing just that with their self-titled debut album. Almost every single song is amazing and they’re often credited as pioneers of the new wave sound.

There were other bands doing the same thing but they stood out because they brought something different and unique to the table – more importantly, the album is widely known for the heavy use of cutting-edge technology.

“We used to joke that the first album should be called The Cars Greatest Hits. We knew that a lot of great bands fall through the cracks. But we were getting enough feedback from people we respected to know that we were on the right track.” – Elliot Easton

The tracks were catchy and it was fairly easy to get hooked. It’s almost a sin not to put it on repeat once you finish listening to every song.

The Clash arrived with a bang. This is one of the best things punk rock had to offer. The album’s laced with sarcasm and reflected the band’s social and political sentiments. It was a real riot but in a good way.

The songs are intense, furious and well, it’s safe to say they got their point across. They had a message and they knew how to make people listen. The music was fast and frantic – it keeps you on the edge of your seat.

It was the kind of debut every rock band wished for. And while there are other albums which rival this in terms of greatness (like the epic “London Calling”), this remains a memorable one. It put The Clash on the map and even today, they remain as influential as they were years ago.

Van Halen had some highs and lows but their debut album is definitely one for the books. It changed the face of hard rock – every single track is a stand-out, the tunes are amazing and of course, the guitar solos feel almost otherworldly.

It was like a punch in the face and suddenly, everyone wanted to be an axeslinger. It’s just awesome from beginning to end and if you find any fault here, you’re listening to it all wrong.

“IT’S DIFFICULT to overstate the effect VH’s debut had upon its release. With the music world split between punk, disco and prog rock, Van Halen combined a dazzling live show with a party-hearty motto and, in Eddie Van Halen, a guitarist who redefined what was possible on six strings. His sound on this album – christened ‘The Brown Sound’ – remains the holy grail of guitar tones.” – Kerrang! Magazine

They were difficult to ignore. Eddie Van Halen was an explosion of talent. He could shred with the best of them and much more. Also, you can only do justice to these songs if you play it loud – and we mean, neighbors-complaining kind of loud.

One of the things we love about The Doors’ debut album is how it feels like a musical journey – from the opening to the closing track, there are no fillers, just great songs. And it’s pretty tough to pick one favorite because everything is stellar in their own way.

From the classic “Light my Fire” to the spine-chilling “The End,” we get a glimpse of Jim Morrison’s artistry through his poetry. We don’t “see” his charisma yet but this is how we knew he wasn’t your average singer-songwriter.

Anyone who listened to that album became sure The Doors were going to be big. It was a little taste of how the band members have incredible chemistry. But yes, the only thing no one saw coming was Jim Morrison’s crazy antics. Ha.

When it was released more than 50 years ago, the world was never the same. To claim that this is the greatest album from The Fab Four is still up for debate but it’s unarguably one of the best debuts of all time.

It’s rare for a record to make such a huge impact but it did and it quickly became a standard to which all others were held. Also, it was like a promise of much better things to come.

“I asked them what they had which we could record quickly, and the answer was their stage act. It was a straightforward performance of their stage repertoire—a broadcast, more or less.” – George Martin

They finished recording after almost 10 hours but even so, it’s all sorts of awesome. The opening track “I Saw Her Standing There” and of course, the closing song “Twist and Shout” – every single one is unforgettable. From the iconic cover artwork to the classic hits, what’s not to love?

We could make an entire list of bands who made it big thanks to Bob Dylan. The Band, no matter how uninspiring their name sounds, used to be Dylan’s backing group while he was on tour. While making their debut album, Dylan even offered to play but they were wise enough to refuse. Besides, if they wanted to make a statement and be noticed, Dylan singing in one of the songs isn’t the way to do it.

“Over time, Music from Big Pink came to be regarded as a watershed work in the history of rock, one that introduced new tones and approaches to the constantly evolving genre.” – AllMusic’s William Ruhlmann

It’s not as wild, intense or complex as other records. On the contrary, its simplicity and rustic charm were its strongest and most appealing attributes. You can hear their musical influences and it still sounds refreshing all the same.

This is the kind of “story” we can listen to all day long.

Boston’s debut album is a treasure trove of musical gems. We feel bad for anyone who either doesn’t like it or worse, hasn’t listened to it completely. There’s so much you’re missing out on because it’s one of the greatest records we’ve ever heard.

The guitar riffs are heavy and epic. Everything about is memorable and in a good way. Some say it’s overrated, well not exactly. The thing is, it rightfully deserved whatever recognition it got.

“And all of a sudden I realized I was in the music business. I got word on what the sales figures were while I was still at Polaroid full-time. It wasn’t easy staying there two more weeks.” – Tom Scholz

It wasn’t an overnight success. They spent two years sending out demos only to be rejected. But Tom Scholz kept pushing on. And it paid off big time. Three weeks after its release, it was certified gold. Three months later, it received the Platinum Record Award. Now how’s that for a happy ending!

2. The Jimi Hendrix Experience – “Are You Experienced?”

There’s a reason why Jimi Hendrix is hailed as the greatest guitarist of all time. His debut album is that one thing we never thought we needed but when it was released, it blew everyone away. It’s a masterpiece from beginning to end and we can’t gush enough about its greatness. It’s the work of a musical genius, period.

You see, some artists take a few records before they reach their peak. Jimi Hendrix hit the ground running – he took us to a psychedelic journey that left us breathless, exhilarated and wanting for more.

“On Are You Experienced?, Jimi Hendrix synthesized various elements of the cutting edge of 1967 rock into music that sounded both futuristic and rooted in the best traditions of rock, blues, pop, and soul. It was his mind-boggling guitar work, of course, that got most of the ink..” – AllMusic’s Richie Unterberger

It showcased Jimi Hendrix’s guitar work which is hands down spell-binding. It featured numerous classic hits but more than that, it gets to you – the music is incredibly moving. And with this record alone, Hendrix left a legacy no one else can top.

This is the way to announce your arrival and take your rightful spot in the rock ‘n roll pantheon. They took hard rock to another level and Jimmy Page, the great virtuoso that he is, shows off his jaw-dropping axeslinging chops. He added so much soul to the music with his guitar work of grand proportions.

It’s not just him – the rest of the band held their own. From Robert Plant’s hauntingly beautiful vocals to John Paul Jones and John Bonham, they proved that their skills as individual musicians cannot be outstaged.

“On the first LP I was still heavily influenced by the earlier days. I think it tells a bit, too… It was obvious that somebody had to take the lead, otherwise we’d have all sat around jamming for six months. But after that, on the second LP, you can really hear the group identity coming together.” – Jimmy Page

There’s raw energy and sheer brilliance that can only come from Led Zeppelin. It’s not exactly their best album but it’s still an impressive way of showing they weren’t another boring and forgettable rock band.