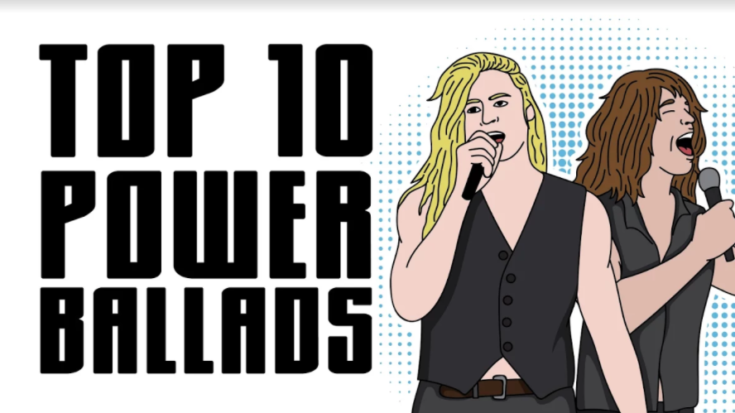 There’s a soft side to everyone including your favorite cold-hearted rockstars. It’s not just that though because “power ballads” are the cash cows that never fail to line their pockets. In a nutshell, it’s a sure sell (do you have any idea how much hairspray, spandex suits and platform boots cost?). You see, for hard-rockin’ musicians, they’re not exactly too keen on adding overly-emotional stuff in their catalog and we totally get that.

Besides, there’s a reason why these songs received massive airplay and are regular fan favorites – they’re catchy tunes and it’s fairly easy to sing along to them. Are they cheesy? Maybe. But to be fair, some of them are seriously good of course, provided you keep an open-mind and not judge them even before listening.

Also, who doesn’t love a good drama? And these power ballads have tons of them – from love lost to longing.

Warning: these MAY range from “Eh, okay” to “How about no?”

This may not be their best song but it’s sure in the top five. It turns us into a big ball of cheese because we just love it. Part of the reason is Sebastian Bach’s jaw-dropping vocals – oh and did we mention his live vocal performance is as good as the recording, if not better?

This track showcased his range.

“’I Remember You’ was the #1 prom song in the United States of America in the year 1990….You talk about making memories! Literally the whole country of America did their prom dance to ‘I Remember You’ one year, and that’s a real heavy memory to beat.” – Sebastian Bach

Anyone who was a teen in the late ‘80s surely heard this often on the radio. It was a chart-topping hit and most probably, it’s also everyone’s favorite ballad at the time of its release. Admit it, you know the lyrics by heart.

It’s hard to think of power ballads and not include this epic tune from Whitesnake. Sure, the title is like a promise that the song’s going to be tolerable, at best, but hey it delivers. Besides, it’s not every day you get to hear a track that talks about love and still rocks hard. With this, you get the best of both worlds.

Interestingly, this was originally written for Tina Turner.

“Before I’d left [for the south of France] a friend at EMI had asked me for any ideas that would work for Tina Turner. So that was where the original idea for “Is This Love” came from.” – David Coverdale

“Is This Love?” was a huge hit for the band and it peaked at #2 on the US Billboard Hot 100 chart. It remains one of the greatest and most well-loved ballads of all time. It does give us a glimpse into the soft underbelly of David Coverdale and well, who can resist that?

When glam metal rockers Poison released “Every Rose Has Its Thorn,” you’d think they were going bubblegum pop because of the reaction of some fans. But after all the doubts, skepticism and feelings of betrayal, the initial shock proved to be fruitless. As it turns out, it’s one of the band’s greatest musical moments.

The song itself is well, sad, and just full of drama. But Bret Michaels shined here. And as it turns out, it became their biggest hit.

“When we played Every Rose… for our label and management they told us it would end our career. They were like: ‘This song is not Poison. It starts with an acoustic guitar, and you’ve got this cowboy thing going on and it’s just sad’.” – Bret Michaels

Not only did it chart but it became one of their signature songs. Who would have thought Michael’s relationship problem could turn into a classic?

When we mentioned earlier that stuff like this sells, it’s an absolute fact. This song was released at a time when power ballad was everything. It dominated the radio stations and everyone who went to prom had to dance to at least one of these tracks.

Def Leppard’s “Love Bites” was their only single to ever top the US Billboard Hot 100. Just like Poison, when this song was brought to their attention, they didn’t know what to make of it because it wasn’t something they’ve done before and it’s not exactly “Def Leppard.”

“It was just a standard rock ballad but it had something else going for it. Lyrically, it kind of painted a picture, and in a song you always want to do that, paint a picture. ‘On a dark desert highway,’ the first line of ‘Hotel California,’ great song, it just paints an image for you straight off the bat and that’s the sign of a really good song. It takes you right there. ‘Love Bites’ did that as well.” – Def Leppard’s Phil Collen

For every band with their first power ballad, it’s always a huge risk – but these songs have proven that most of those paid off nicely.

Like the previous groups, this power ballad became Warrant’s most commercially successful single. The response was so overwhelming even Warrant’s own producers were surprised with its success. You see, songs like this have a certain appeal even to skeptical listeners – those who swore they don’t like ballads.

The lyrics are dramatic and emotional, something you don’t think you’ll ever hear from bad ass rockstars. But here’s Jani Lane in all his bluesy glory, singing his heart out.

He has a good point. One great ballad is still a thousand times better than five mediocre rock songs. Just ask all these groups on this list.

One of Bon Jovi’s main selling points is of course how hot JBJ is. So imagine him singing “And I will love you, baby, always / And I’ll be there forever and a day, always / I’ll be there ’til the stars don’t shine / ‘Til the heavens burst and the words don’t rhyme…” in all his sexy glory.

It’s hyper-emotional, we know, but it’s a lovely track and a definite crowd favorite as evidenced by the numbers – more than 3 million copies sold worldwide.

“It’s a sick little twisted lyric. So many people feel it’s so romantic and so wonderful, but truthfully, this guy is practically a stalker. He’s a sick human being.” – Jon Bon Jovi

Wow, okay, somehow we didn’t think the guy’s a creep. We thought it was just him professing his strong love for the girl. Clearly, JBJ had other ideas. Still, the song sold big time and is still a classic hit.

How can we forget Meat Loaf’s epic ballad masterpiece people are still singing more than two decades after it was first released? It served as his comeback song and man, what a way to announce his arrival! It was a massive success – it topped the chart in several countries and earned platinum status.

“It sort of is a little puzzle and I guess it goes by – but they’re all great things. ‘I won’t stop doing beautiful things and I won’t do bad things.’ It’s very noble. I’m very proud of that song because it’s very much like out of the world of Excalibur. To me, it’s like Sir Lancelot or something – very noble and chivalrous. That’s my favorite song on the record – it’s very ambitious.” – Meat Loaf

By now you probably know the music industry is very hard to please. And in line with that, this song actually made it to numerous WORST lists. Also, over the years there were speculations about what the “THAT” in “I won’t do that” refers to. Maybe that’s part of the appeal, no?

Journey’s biggest hit is also one of their signature songs. Even though it has been covered by other artists, it’s hard not to think of the original version and of course, Steve Perry’s spine-chilling vocal performance.

The thing is, behind every ballad there’s always a band member who’s against it. For them, they feel like they’re abandoning their style and betraying their fans but hey, some of them eventually come around. For Journey, it was guitarist Neal Schon who wasn’t exactly thrilled at the prospect of performing a track which he thought “sounds kinda Mary Poppins.”

“I had to keep my head down on the console when “Open Arms” was on. There is one line in the song that I always wanted to be a certain way. I have ideals about certain things. The line “wanting you near” — I just wanted that line to go up and soar. I wanted it to be heartfelt. Every time it would come by I would just have to keep my head down and try to swallow the lump in my throat. I felt so proud of the song.” – Steve Perry

Well he should be proud, it’s a beautiful track and an unforgettable one at that.

This is Guns ‘n Roses at their finest. GnR with all their bad boy image and typical rock lifestyle is not immune to the allure of power ballads. And they took this to the next level too with the help of an orchestra. It was nothing short of majestic.

It was released in 1992 but according to Tracii Guns, Axl Rose has been working on “November Rain” since 1983, around two years before GnR was formed. Well, all that hard work definitely paid off because it was commercially successful after selling over a million copies.

“When we were doing that EP for L.A. Guns, like ’83? He was playing “November Rain” — and it was called “November Rain” — you know, on piano. The guitar solo is amazing. Way back then. It was the only thing he knew how to play, but it was his. He’d go, “Someday this song is gonna be really cool.” And I’d go, “It’s cool now.”” – Tracii Guns

Only GnR can make something this dramatic still sound kick ass. Oh and don’t even get us started on the phenomenal music video. That’s seriously one for the books.

The ultimate power ballad is Aerosmith’s stellar tune “Dream On.” It was the band’s first major hit and until today, it continues to remain a staple in any classic rock radio station. It’s an incredibly touching tune that’s difficult not to love.

This song also showcased Steven Tyler’s talents – from singing to playing the piano part. The man was a musical powerhouse.

“It’s about the hunger to be somebody: Dream until your dreams come true. This song sums up the s–t you put up with when you’re in a new band. Most of the critics panned our first album, and said we were ripping off the Stones. That’s a good barometer of my anger at the press, which I still have.” – Steven Tyler

It’s one of those tracks that get to you. And while many other musicians covered it, nothing beats Tyler’s raspy vocals. It’s just perfect for the ballad.