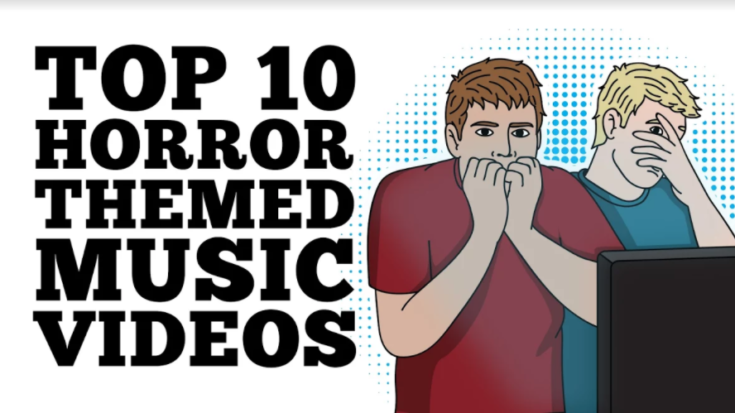 Are you of afraid of… music videos?

Halloween is here and it’s that time of the year again when everything turns a bit more spooky – from movies, to music, and even music videos. There’s just a season when artists and bands decides to put a little (or a lot) of horror themes into their music videos and it’s a Halloween dream come true. As if one genre pays homage to another, the world of rock music itself is no stranger to darkness. Sometimes, it even thrives on the dark and twisted. Its fair to say there are actually a number of music videos out there that explore horror themes, and it makes them more memorable for the audience. It certainly makes music videos more interesting when it draws inspiration from the world of horror.

Ryan Adams has been bouncing on and off in the spotlight and every once in a while he releases something very weird and absurd people start having suspicions about his creative process. In any case, it’s safe to say he’s still one great rocker himself and he’s recently proven his wacko artistry in his newest music video for his single “Gimme Something Good”. The music video is shortchanged in grainy black and white like that of low-quality TV image back in the day. What makes the music video part of this list is that it features a very important and nostalgic horror element: the Mistress of the Dark herself, Elvira. It’s an Addams-Family flashback with the setting featuring a creepy haunted house, and a creepy love interest. The closing frames of the video even shows Elvira holding Ryan Adams in an embrace – not your typical romantic pairing.

Marilyn Manson himself already embodies horror. Released as Manson’s single in 1996,  “The Beautiful People” has a is beatifully….disturbing. Manson himself is shown as being constantly disfigured with wires and contraptions throughout the video. The video goes on to include worms…and dolls, just to add to all things horror. Kudos to the make-up department of this video though for making the cast in this video look very creepy and messed up. If you want your dose of unease, cringe, and a disturbing feeling of discomfort this Halloween, watch Marilyn Manson’s “The Beautiful People.”

This music video comes as if it was straight from your darkest nightmares. Swedish singer Fever Ray’s debut single “If I Had a Heart” is a song that is as haunting and horrific as its music video. The experimental song itself is dark, slow, and eerie. The creepy background of the lyrics were inspired by Fever Ray’s observation of her own children but in a twisted way. While the music video does feature children, it couldn’t be more farther from innocence with its imagery of death and gore. The video suits the song, and the evocative visuals add to its haunting quality. With the children entering what seems like a haunted mansion with blood-soaked interiors with a masked figure who stands guard, watching the children, it definitely feels like a horror film inside a music video.

The Prince of Shock Rock always comes through if it’s anything to do with rock music and horror. Released in 1991, “Hey Stoopid” was the most successful single of his nineteenth studio album of the same name. He’s certainly had its of famous help on the album including Slash, Ozzy Osbourne and Joe Satriani. The music video for this song unsurprisingly featured elements of horror and it opens with an image of a haunted mansion. There are also other weird features such as flaming roller coasters that have skull-shaped cars speeding straight into the gaping mouth of a crocodile. There was also a disembodied beating hart and of course a dismembered skull singing along with him. It’s like Alice Cooper’s dark and twisted version of what a theme park would look like.

Stop-motion animation gone dark. “Sober” is Tool’s first music video, their second single from their first studio album Undertow. The music video was directed by Fred Stuhr who also directed many following music videos that are just as disturbing. Horror elements of the video includes humanoid puppets, one looking like a horrifying man who seemed to be made of the human brain.  The weird looking creature is seen twitching and vibrating in a violent and disturbing manner as he levitates in his chair. The video also features elements of violence and torture. A dark visualization of the word ‘sober’ for sure.

It’s a scare fest with Yeah Yeah Yeahs’ music video follow up to “Maps” for the song “Y Control”. It seriously profoundly disturbing. The nightmare of a video showcased a sort of “Children of the Corn” theme that showed young kids as violent murderous psychopaths performing gruesome behavior. The video was directed by esteemed director Spike Jonze and it looks like they were inspired by Michael Jackson’s “Thriller” but seriously took it way too far. Other absurdities feature lead singer Karen O dancing in a red tutu before being attacked by the creepy evil little children. She then proceeds to being dismembered with a rusty axe by a vampire boy. Spike Jonze shot the video in a handheld cam style that only makes the tone of the entire thing extra creepy.

4. Bark At The Moon – Ozzy Osbourne

Ozzy Osbourne as an early 80s werewolf? Classic. Although this music video is more campy than scary, it still features a horror theme. Ozzy Osbourne’s 1983 single “Bark at the Moon” features a very memorable and ridiculous music video that shows Ozzy dressed as a variety of classic horror characters. First he takes the character of a creepy Dr. Jekyll who was experimenting with unknown and presumably dangerous chemicals. After a moment, he unleashes the beast inside as he transforms into a hybrid of Mr. Hyde and a wild feral werewolf – the image on the ‘Bark at the Moon’ album’s cover art. The whole video features classic horror tropes that borders on corny, but thanks to Ozzy’s second guitaristm the great Jake E. Lee, we can also focus on the insane guitar-shredding that makes this video awesome through the years.

It’s a pyscho horror film compressed in a music video! The music video for British DJ Aphex Twin’s “Come To Daddy” features almost all the basic elements of a horror movie: the plot follows a creepy old lady get terrorized and chased by a dozen creepier children all wearing the same mask of Aphex Twin’s face donning a hauntingly frozen smile, all dressed in the same little’ girls’ outfit.  “Come to Daddy” has become infamously known for its disturbing content. All from the singer’s distorted face to it being mounted on little children’s faces all while they wreak havoc in the dark neighborhood and chasing a man into his car. Oh, and there is also the demonic form of a creature that emerges and scream’s into the old lady’s face. Naturally, “Come to Daddy” was voted into the Top 50 of Channel 4’s Top 100 Greatest Scary Moments in 2003. Perfect for Halloween!

2. Until It Sleeps – Metallica

Talk about shock rock. When Metallica debuted their music video for their single “Until It Sleeps” in 1996, fans were shocked by the creepy and disturbing imagery the band featured. The video was inspired by Hieronymus Bosch’s paintings that showed scenes of the Biblical character Adam in his journey to committing the original sin. Other Biblical references show pictures Jesus dying but represented in parodies of the Black Death. The video also showed a sort of human-eating monster straight from The Garden of Earthly Delights. The band members themselves were donning dark make-up and visual effects and cutting their hair on film, no doubt displaying horror themes. Front man James Hetfield who wrote this song says that the song was about his mother who died from cancer and how he coped with his mother’s death.

What is a Halloween music video list without Michael Jackson’s “Thriller”? This music video defined horror-themed music videos! This 80s classic is as iconic as the Michael Jackson himself. Running at nearly fifteen minutes in length, the entire music video is like a short horror film itself. It is the ultimate music industry homage to classic horror movies. Directed by An American Werewolf in London director John Landis, the entire first half of the movie (before the dancing starts) is like Jackson’s own horror film. The music video is almost synonymous to the event of Halloween itself. Every part of the video from Vincent Price’s opening narration to Michael Jackson’s costume to the iconic dance, “Thriller” is certainly THE ultimate horror-themed music video of all time.