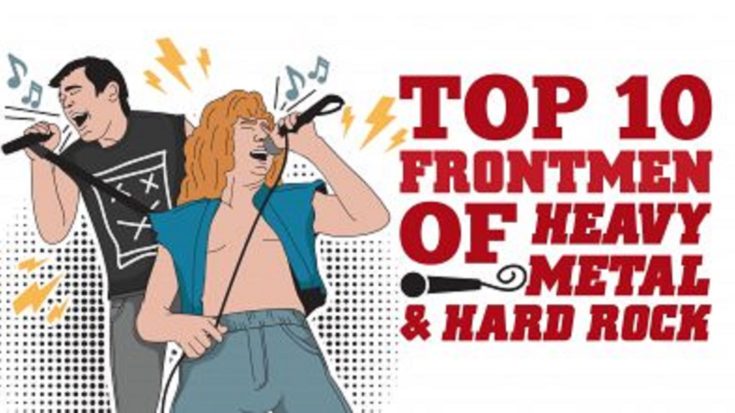 What does it take to be a great frontman? Strong stage presence is essential of course. But what sets the vocalists in this list apart from everyone else? It’s more than just an unforgettable voice. They need to be captivating. They should be able to command attention from the audience. So we rounded up who we think fits the bill.

Before Brian Johnson, there was Bon Scott. He was incredibly charismatic and much-loved by fans. He practically brought AC/DC into international stardom and was there during their first taste of success – with that distinctive gritty voice which is nothing short of magical, how could anyone forget this original frontman? He was larger than life on stage bringing with him wit, talent and ballsy attitude while belting out some classics. Even until now, he’s still among the most celebrated frontmen in hard rock history. Case in point, his Scottish hometown paid homage to him by building a statue crowdfunded by loyal fans. He’s a pure musical genius and people loved his sleazy demeanor during his live performances. I guess we can say, Bon Scott had a Touch Too Much. Sorry, I couldn’t resist. Angus Young also described him as: “He had no airs and graces about him, probably because he was a drummer at heart. When he got into music, that’s what he wanted to do.”

Phil Anselmo’s on and off stage antics may be quite controversial even up to now but you can’t deny the fact that he’s a prominent figure in heavy metal. You can say what you want about him but dang, the man has range. At the height of his career, he was untouchable. He is legendary to say the least. He’s definitely got the chops to put most metal singers to shame. If you’ve heard his isolated vocals on Pantera’s ‘Walk’, it’s going to give you the chills. The low vocals will make you think the guy’s a beast. He has the PERFECT tone and his voice is the absolute definition of a metal singer. Besides, not everyone can pack raw, soulful singing with devastating range but somehow, he manages to do both. There aren’t many who can match his growls. I mean, if there’s any award for best growls, he’ll bag it easily.

From his high and raspy vocals to his undeniable charisma, Joe Elliott has it all. But if there’s one thing you should expect when seeing him perform live, it’s that HE DELIVERS EVERY SINGLE TIME. Whenever I watch some of his performances from the late ‘70s up to the ‘80s, it always feels like I’ve died and gone to musical heaven. He’s not from this world and yes, at the pinnacle of his career, he was unrivaled. True, the years have taken a toll on his voice but you still can’t discount the fact that he has gone down in rock history as one of the most memorable frontmen. He was dynamic and gave new life to the songs each time he performs them. He’s a rock star through and through. After listening to their musical masterpieces, I guarantee you won’t be the same way again. Joe’s vocals is as powerful as his stage persona.

Dave Mustaine and his trademark high-pitched snarly singing aren’t exactly what you’d think of as ‘the best’ when you consider technicality. He may not be the greatest vocalist in heavy metal out there and yes, you can probably think of two or more singers who are better than him. But that’s not the point here. The fact that he brings a lot of character into the songs counts for a lot – especially when you’re a frontman. His vocal style is something that’s hard to emulate, more so his attitude on stage. He’s a total performer and when you’re fronting one of the biggest names in metal, it matters what you bring to the table. And Dave Mustaine never disappoints. True, he has good vocal range and depth but what makes him stand out is how he can lure you into his music. Off stage, he’s a gifted musician. But on stage, he’s a god.

The guy needs the recognition and respect he deserves. It’s not just his ferocious snarl showcased on various hits like ‘School’s Out’ (which is every student’s anthem, by the way) but his incredible versatility which is evident when he takes on ballads. He often gets snubbed in different music lists but it is my belief that he is easily among the top – a heavy metal god sent to earth to teach us about their ways and their music. While he may not be as dynamic and operatic as other vocalists, he does have a strong, gritty voice that boasts of character and range. He throws in a lot of his emotion and soul into each song and as a listener, it’s hard not to channel those things. When you hear his voice, you’ll know it’s him. Even after years of performing, he still has it. He rocks it night after night during his live shows and perhaps that’s why we can never get enough of Alice Cooper.

How can there be a list without Rob Halford’s powerful operatic voice coupled with originality and unforgettable stage presence with a few crazy antics on the side? I mean, no other frontman is cool enough to ride his motorcycle onto the stage on the last song of the show. He shows how a real metal concert should be done. The moniker ‘Metal God’ has never been more fitting and he’s called that for a reason. Additionally, his blood-curdling ear-piercing screams and songs that showcase his vocal highs and lows became a gold standard in heavy metal. It’s hard enough to pick just one song that we can consider as his finest vocal performance ever because obviously, he has several musical masterpieces under his belt. Also, though going to his concerts would blow your mind, you can have the whole Rob Halford experience just by listening to him. Yes, he’s talented and gifted like that.

Ronnie James Dio is almost synonymous with musical versatility. Yes, he can go hard rock but just the same, his powerful vocal range can also sing light ballads. To be fair, heavy metal fans know that this genre is more than just screams and growls. It also showcases the talent of some of the greatest voices the world has ever heard. To sum up his vocal ability, Dio hits high notes with perfect precision. The man had serious pipes. I don’t know how he did it but his gigantic vocal prowess always sounds so effortless in hitting the soaring notes. His voice is all about power. At 1.63m, he was a small man and it makes you wonder how such powerful sound could emanate from him. On stage, he was a dynamo, a real force to be reckoned with. And somehow, his live versions always seem way better than the studio!

James Hetfield has more than a decent vocal range. Compared to Metallica’s early works, it’s fairly easy to spot his richer and more mature sound during the ‘90s. His gruff, straightforward voice is always covered in gritty angst. You want a growl? Check. Need a soft tone? Check. He’s the full package and his vocals always pack a lot of punch, it has that in-your-face kind of vibe. His versatility is something else too. Just try listening to their various records and you’ll get what I mean. He’s so spot on with his style and he stands out easily whenever you play Metallica classics. Add that to the fact that his voice hasn’t changed significantly over the years and you got yourself one incredible vocalist/frontman. It’s not so much with stage antics and theatrics but dang, he plays heavy tones and playing the guitar while screaming and singing aren’t exactly the easiest things to do.

The man is a phenomenon. Off-stage, he is a world-class fencer and a licensed commercial pilot. Onstage, he’s a beast on the microphone. He has one heck of a range and his voice is extremely versatile. Need a proof? Just listen to ‘Number Of The Beast.’ From a soft growl to a high-full voice then going for a long scream – if that doesn’t spell versatility, I don’t know what does. Keep in mind he does the transition flawlessly. There’s a dramatic intensity to how he does it too especially when he sustains his notes smoothly. His vocal talent is simply off the charts. The fact is, Bruce Dickinson can out-sing his contemporaries. And he’s so charismatic on stage, you just can’t top that. When you watch him live, his voice is so powerful it seems like it’s projecting towards the audience at the back. Not all metal singers can accomplish that!

What makes Ozzy Osbourne a great frontman isn’t exactly his singing but more of the personality he brings to the stage. He may not have Bruce Dickinson’s range or Rob Halford’s precision but even those who are not big fans of metal music know who Ozzy is. Sure, it does help that lots of people watched his reality show and are always on the lookout for what drama unfolds next in his real life but that’s beside the point. The thing is, when Ozzy performs, he gives it his 100%. His voice blends so well with his band’s music and it’s not easy trying to imitate that. So I’ll leave you with this little nugget of wisdom from the Prince of Darkness himself: “All that stuff about heavy metal and hard rock, I don’t subscribe to any of that. It’s all just music. I mean, the heavy metal from the Seventies sounds nothing like the stuff from the Eighties, and that sounds nothing like the stuff from the Nineties. Who’s to say what is and isn’t a certain type of music?”