11 Rock Albums Every Parent Should Introduce To Their Teens 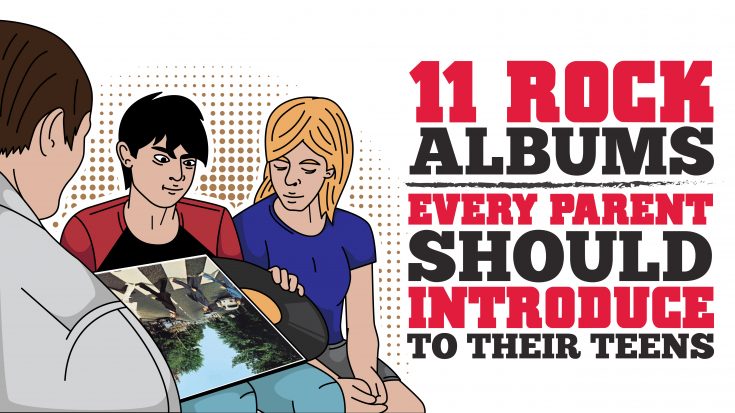 How To Win At Parenting

If you’re familiar with today’s music, you know it’s not even half as good as the ones you listened to decades ago. And don’t even get us started on the music festivals back then. But of course, we need to restore our hope for the next generation and what better way to do that than introduce our favorite classics to our kids. Yup, there’s no need to tell them to ‘turn it down’ anymore. Even your neighbors will thank you.

Ah, yes. It’s brings back a plethora of good memories, doesn’t it? You know, when you were still a teen yourself and saving up for the newest record you can scour. And then voila, you discovered Pearl Jam. This debut album may be filled with angst and depression but it’s just so dang beautiful and it was released just before ‘grunge’ became a popular term. Oh and if you’re a huge fan of alternative rock, this is one of the reasons why the genre became mainstream. Also, it’s safe to say that even if this is the only album they released, they would still mark their place in rock history. From ‘Alive’ to ‘Jeremy’, this propelled Eddie Vedder and the rest of the band towards international stardom. And although it was recorded on a modest budget, it went on to sell more than 10 million copies.
P.S. It’s the kind of album that won’t make you want to skip songs but we guess you already know that.

Their debut album from 1973, Pronounced Leh-nerd Skin-nerd is arguably their greatest album with hit songs such as ‘Simple Man’, ‘Free Bird’, and ‘Gimme Three Steps’. This album is going to be nothing but Souther Rock all the way to bone. Their sound is pretty much as raw as it gets as they were able to blend more than just souther rock but a portion of country, garage rock, blues and just poetic genius when it came down to the message and lyrics. You can’t go wrong with the greatest souther rock band in history. There’s nothing like Skynyrd with Ronnie on lead vocals. Just hasn’t been the same since.

It’s one of the greatest albums of all time – to not have a copy would be a sin. Enough said. It’s morbid, it’s spooky but it’s the kind of stripped-down record you just can’t get enough of. To be fair, we find Grateful Dead’s songs hauntingly beautiful. It’s an antithesis to their previous psychedelic adventurous music hence, the title which they decided on after Jerry Garcia mentioned to Robert Hunter that it was “turning into the Workingman’s Dead version of the band”. It was unlike anything people were used to hearing from them – whether it’s the bright harmony or the folk trimmings. It was a creative turning point for them. We love everything in this album – the vivid imagery is a huge plus. From ‘Uncle John’s Band’ to ‘Casey Jones’, it’s unforgettable on so many levels. Garcia further said, “In midst of all this adverse stuff that was happening … [recording the album] was definitely an upper.”

As if we need any reminder of Freddie Mercury’s versatility! You ought to be given the ‘Parent of the Year’ award if you manage to introduce your youngster to Queen’s most popular album. Do yourself a favor and do not allow them to go on thinking that ‘Bohemian Rhapsody’ was originally sung by Panic at the Disco. That’s blasphemy. You want ballad, progressive rock or hard rock? This has it all. We have to give it to the band – they really worked hard to produce such a meticulously, brilliantly pieced album. It’s like each song is a masterpiece. Queen was out to prove that they weren’t some fleeting glam rock band that might be forgotten after a few hits. They were no longer just stars – they were now household names. And being one of the best that classic rock has to offer, you absolutely need to show your kids Queen’s tour de force. Soon enough, they’d be singing Rhapsody along with you.

There are always two sides of the story and for every Simon and Garfunkel fan, ‘Bridge Over Troubled Water’ is a bittersweet reminder that although the album was highly successful, it also marked the end of the partnership between the legendary duo. But for the record, that wasn’t the least bit surprising given the fact that they had a history of splitting up. Sure, there were internal tensions but that didn’t stop them from making brilliant music. They were just out there! They both never had a better performance; this was Simon and Garfunkel at their finest and the result of their combined best effort is utter perfection. We still get goosebumps when we start playing it – what an epic record. With their eclectic arrangements and some songs with a hint of reggae, it’s insane how all the tracks just get to you on an almost spiritual level. This is definitely their pinnacle moment.

If your teens start questioning your taste in music, tell them the ‘Pet Sounds’ basically paved the way for the development of modern pop. It was released 50 years ago and still holds plenty of influence in today’s music. Although it wasn’t an immediate hit after its release, it’s probably one of the few times when ‘slowly but surely’ paid off for a rock band. It’s enduring and still manages to be well-loved decades later. There’s actually a beautiful and inspiring back story behind its success – that of wild ambition and tremendous courage. The melodic genius and lyrical depth displayed in ‘Pet Sounds’ continues to be unrivaled. There’s just nothing like it – not then, and certainly not now. You can’t help but be blown away by the artistic vision and its consequent realization. And to think, there’s not much to it except a lot of ‘soul.’ You seriously want your kids to know what real music is – no auto-tune, just pure talent.

Simple, pure, just rock. After the beloved lead singer Bon Scott passed away after choking on his vomit in the back of a car, it was Brian Johnson who came in and would become the other iconic voice of AC/DC. This album includes one of the greatest intros in all rock’s history with the track ‘Hells Bells’ at the beginning and just legendary tunes come after it such as ‘Shoot to Thrill’, ‘Back in Black’, and ‘You Shook Me All Night Long’. These are some of the most recognizable riffs and lyrics and have even stood the test of time until today. You can’t go wrong with Angus on that guitar, ripping it up with his signature solos and style.

At some point, you really might have to tell them all about the Lindsey Buckingham-Stevie Nicks drama. And it’s gonna feel like you’re sharing a part of your own teenage life. And you’ll share Fleetwood Mac stories as if you were there too. Man, you just can’t skip this one. Your kid needs to know that ‘Dreams’ was originally sung by the one and only Reigning Queen of Rock ‘n Roll and that most Coachella music festival outfits are influenced by Stevie Nicks’ fashion. Yes child, for real. It’s not your typical breakup album. Sure, we can hear some banter and bickering but it’s even hard to pick just one song to love – everything hits you right in the feels. It doesn’t matter whether you can relate to Stevie or not but she can really make you feel it. And you’re doing your teens a favor by introducing them to some of classic rock’s best songwriters.

It’s the absolute must-have for every rock-loving teen and young adult back in the day. And anyway, it’s going to teach your teen the value of ‘delayed gratification’ – you know when you have to wait a couple of minutes before actually hearing the song. Well we’ve all been there – the time when we weren’t sure if the record player stopped working or it was just an introduction to the next Pink Floyd song. Ha! But anyway, ‘The Wall’ is undeniably one of the most creative and imaginative albums of all time. It’s intriguing and explosive in so many ways. And it’s a lot like flipping through a thrilling novel, you can never get enough of it. When you listen to it on record, it’s spell-binding. But when you hear it live, the complexity is astounding. It’s not something every band can come up with. It’s definitely the work of a musical genius.

If your kid only knows ‘Stairway to Heaven’ then shame on you. Nah, we’re just kidding. There are so many incredible, highly addicting tracks from Led Zeppelin’s debut studio album that your teen is missing out on. Take your pick from ‘Dazed and Confused’ to ‘You Shook Me.’ because you can clearly hear the band’s roots and bluesy influence. And while the songwriting is superb, there’s no denying the raw power emanating from each song. It’s like a punch in the face – letting you know the boys aren’t here for a one-time hit but they basically just gave you a glimpse of their massive talent and boundless musicality. Of course, it’s debatable whether it’s Led Zeppelin’s best album but it’s a good introduction nonetheless to those who haven’t heard their music before (which is a huge impossibility by the way but we’re not judging). There’s just no better way to make them fall in love with classic rock.

Or you can choose from any of The Fab Four’s albums – it was actually pretty hard to pick just one. You see, one of our pet peeves is when the younger generation watches a cover on YouTube and they immediately assume that’s the original version. Oh, please. The Beatles were cool before these internet sensations were even conceived. LOL. But yeah, it’s a musical masterpiece filled with so much captivating work. What’s the point of letting them listen to classic rock music without even telling them about the brilliance of The Beatles. From the harmonies to the melodies and instrument sounds – it’s utter perfection. And the medley is just epic. It’s probably the summit of the entire band’s musical genius. Yes, they have plenty of other incredible albums but this one really takes the cake. Every song is great and really gets to you. We can put this on loop every day and still not get tired of it.