7 Of The Most WTF Moments In Rock Concert History 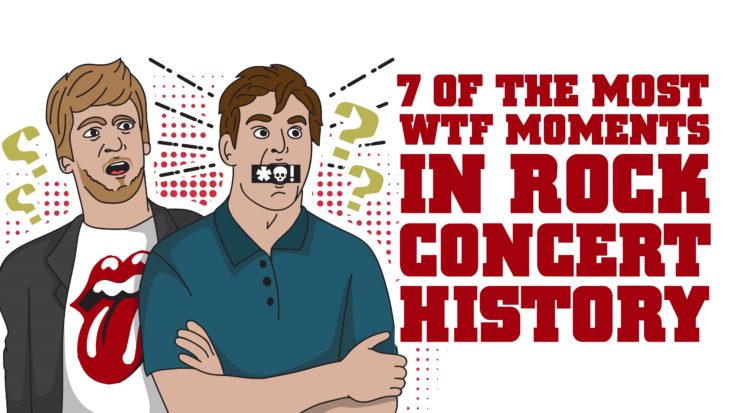 Nothing Can Prepare You For This

There are weird things that happen in rock concerts (some were even unexpected and beyond anyone’s control), then there are batshit crazy moments. Warning: This isn’t for the faint of heart.

The Monterey International Pop Music Festival is legendary in more ways than one. The three-day concert event was attended by anywhere between 25,000 and 90,000 people. The Who performed before Jimi Hendrix owing to a coin toss and although Pete Townshend and the boys did a mighty fine job on-stage, Jimi was undoubtedly the highlight of the show. He ended his set with a cover version of “Wild Thing” while making sure he captivated everyone’s attention with his guitar acrobatics – dry-humping his custom-finished Stratocaster, kneeling over it, pouring lighter fluid, and setting it on fire. As if that wasn’t enough, he smashed it a couple of times (while it was still blazing) then scattered the remnants by throwing it into the audience. Talk about extreme showmanship! But it wasn’t exactly a huge waste because that stellar performance made a legend out of Hendrix and solidified his band’s place in rock ‘n roll history.

Jim Morrison is quite possibly the master of mischief when he’s drunk. His antics have been well-documented and he’s not exactly at his best behavior after a couple of drinks. On March 1, 1969 during The Doors’ concert in Miami, the band had the most controversial performance in their entire career thanks to Morrison’s unpredictable and notorious onstage action. After three hours of waiting for the concert to start, the tightly-packed audience members were already restless. So with his sex-symbol persona, he started taunting the audience by saying: “You didn’t come here for music did you? You came for something more, didn’t you? You didn’t come to rock’n’roll, you came for something else didn’t you? You came for something else –WHAT IS IT?” He then covered his crotch with his shirt and took it away for a second, briefly exposing his private part. Four days later, he was issued an arrest warrant for charges of indecent exposure, and lewd and lascivious behavior. It remains a myth, however, if that incident really happened. Well only the concert-goers know.

It all started with the Parents Music Resource Center (PMRC) group that’s responsible for the black and white “Parental Advisory” stickers you see on your favorite explicit albums. They also published the ‘Filthy Fifteen’ which is a list of songs they found so offensive and even wanted to ban. So back to Lollapalooza where Rage Against The Machine was scheduled for a 14-minute set. As it turned out, they went there not to play music but to stand onstage buck naked with the letters PMRC painted on the chest of each of their band members. They also covered their mouths in duct tape in silent protest to the controversial stickers. The crowd, after realizing they weren’t going to play anything at all, started booing and throwing bottles to the stage. The authorities had to haul them off to. RATM eventually made it up to their fans by playing a set for free.

Most people who were at the Altamont Rock Festival in 1968 would likely describe the event as a ‘tragic disaster’ especially when The Rolling Stones took the stage for the closing. Their security at the time was the Hells Angels motorcycle gang which was a mistake right off the bat. They were aggressive and violent and they were only paid $500 worth of beer. Basically, an inebriated security in the midst of unruly fans isn’t exactly the most ideal way of keeping things in order. It’s like you’re just waiting for trouble to erupt. They hit some audience members with clubs but the most disastrous moment happened while the Stones were performing “Under My Thumb.” 18-year-old Meredith Hunter was high on meth and pulled out a gun. Hells Angels’ Alan Passaro, who became more hostile by this time, rushed to him and stabbed him to death. Unaware of what was happening, The Stones finished their set. Three more died – one who overdosed on LSD and two who got hit by a car.

After breaking up with Pantera, Darrell Abbott and brother Vinnie Paul set out to making albums and touring all over US with their new band, Damageplan. It was on their concert in Columbus, Ohio (just two shows away from completing the tour) where tragedy struck. Former US Marine Nathan Gale was mentally-deranged and initially tried to board Damageplan’s tour bus but failed. He was six-foot-five and heavily armed. A few seconds into the song “Breathing New Life”, Gale went up on stage and shot Dimebag three times with his Beretta 9mm handgun. Fan Nathan Bray tried to perform CPR on Dimebag and was unfortunately gunned down too. He went on a shooting rampage and took the drum tech as hostage. Officer James Niggemeyer was the one who put Gale down with a shot to the head. After a thorough investigation, the police found out that Gale was a troubled schizophrenic and he thought Pantera members were trying to enter his mind and steal his thoughts.

This is probably one of the weirdest and most messed up things anyone can do to musicians performing on stage. It doesn’t matter if it’s David Bowie or an unknown band, this is not even remotely cool. About 20 minutes into Bowie’s set during the concert, he had to stop performing because a lollipop hit him in the eye – with the stick lodged between his left eyeball and socket. He winced in pain and shouted “You f—ing wanker! You little f—er!” Fortunately, it was his ‘bad eye’ – the one left permanently dilated after a fight with his schoolmate. He even said, “Lucky you hit the bad one.” A set crew helped him remove the lollipop, after which he continued with his performance. There were 7,500 people in the audience and it was difficult to find who the culprit is but a 30-year old woman admitted the lollipop was hers and said she didn’t throw it. She was dancing when she got pushed and the lollipop flew from her hand.

Warning: Make sure you’re reading this on an empty stomach. Ozzy Osbourne has his fair share of crazy antics (he snorted live ants, for example) but nothing beats this one. Thinking about it makes us gag already. You see, during their concert at the Veterans Memorial Auditorium in Des Moines, Iowa, somebody threw a bat on the stage while Ozzy was in the middle of a performance. The bat was stunned and immobilized probably because of the blazing lights. He honestly thought it was a rubber toy and for the sake of showmanship, he bit the head off belatedly realizing it was alive and real. However, he revealed that the bat apparently bit him too and he had to receive rabies treatment. He talked about the whole experienced in his memoir saying: “Immediately, though, something felt wrong. Very wrong. For a start, my mouth was instantly full of this warm, gloopy liquid, with the worst aftertaste you could ever imagine. I could feel it staining my teeth and running down my chin. Then the head in my mouth twitched. Oh fuck me, I thought. I didn’t just go and eat a fucking bat, did I?”