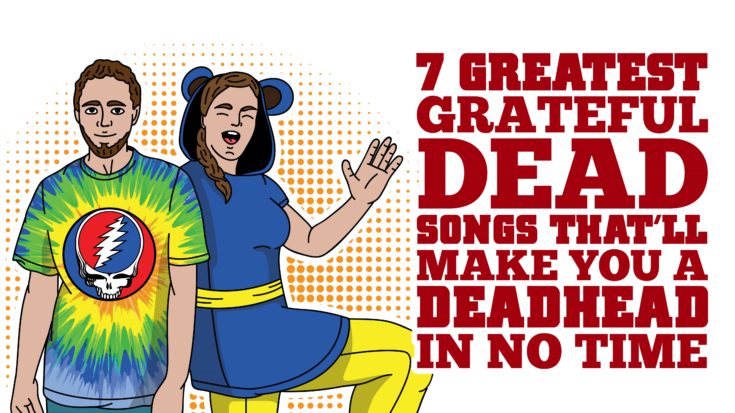 When we think of brilliant musical craftsmanship, we think of Grateful Dead. The lyrics alone requires deep analysis (there’s a website dedicated entirely to this!) and the improvisational passages during their gigs are almost otherworldly. Now let’s revisit some of their greatest hits and if you’re not yet a huge fan, we guarantee this will win you over.

This will always be one of the best songs to hear live. There’s just nothing quite like it. This track has that classic Grateful Dead sound and the lyrics talk about the band’s life on the road – all the challenges and misfortunes that came along their way. It served as a metaphor for facing life’s constant struggles. The United States Library of Congress also recognized it as a national treasure back in 1997! Now that speaks volumes on how great this is. It has that communal vibe and the line “What a long, strange trip it’s been…” is quite possibly as popular as the whole song itself. According to Phil Lesh, “We took our experiences on the road and made it poetry…” That’s what they do best, to be honest. We’ve always loved how their words are hypnotic and always tell a story. We rate this one as the best road trip track ever.

When we think of this classic hit, we think of its famous refrain, “I will get by / I will survive…” Even with a pop tempo and song structure, it still has that kind of vibe present in every Grateful Dead track. This is epic music, enough said. It gives us that light, good feeling whenever we listen to it although there’s also a hint of subtle sadness. Another thing that made it more memorable especially for Deadheads is the fact that it was accompanied by a music video – the very first one the band ever created and it received plenty of airplay on MTV. Even with so many amazing songs in their catalogue, this is actually the only one that topped the Mainstream Rock Tracks chart and became part of the top 10 in the US Billboard’s Hot 100. This propelled them to the mainstream scene thus earning them a new generation of fans.

Some fans consider this as the greatest story the band has ever told. The music is so smooth, the lyrics dark. The song tells the story of an outlaw who’s on the run from the authorities. Although his crime wasn’t stated, he strikes a deal with the Devil who eventually screws him up and chases him too. Like most of the classics in Grateful Dead’s fifth studio album “American Beauty,” this track is acoustic and is popular for Jerry Garcia’s riff. And it has a very groovy tune. Because this became one of the most covered Dead songs, Robert Hunter said: “that was the closest we’ve come to what may be a classic song.” Bob Dylan and Tom Petty & The Heartbreakers were among the many musicians who made their own rendition. Still, nothing beats the original. It just doesn’t get any better than this.

P.S. We know all the words by heart.

Okay, we found another legit reason to time travel – back in the day when music was as good as this. From the easily recognizable tune to the unique lyrics – we love everything about this. Grateful Dead has performed this live about 300 times so it’s safe to say, this is a crowd favorite and we’re not the least bit surprised. This is about the railroad engineer, Casey Jones, and his dilemma as his train was about to be wrecked because there was another train headed for him. This is inspired by a real railroader with the same name who died because of collision with a stalled freight train. He became a hero because he tried to save his passengers all the while trying to stop his train.

Robert Hunter shared to Rolling Stone, “”Casey Jones” didn’t start out as a song, it just suddenly popped into my mind: “driving that train, high on cocaine, Casey Jones, you better watch your speed.” I just wrote that down and I went on to whatever else I was doing, and some time later I came across it and thought, “That’s the germ of a pretty good song.””

This is like a gift straight from the music gods. And by the way, this brings back so many good memories. Grateful Dead’s classic hits were always hypnotic and mystical. This particular track has plenty of beautiful lines and one of our favorites is, “What I want to know, where does the time go?” There’s something about it that gets to you and hits you right in the feels. This is the time when the band was at the top of their game. The guitar work alone is incredibly beautiful. Overall, this timeless piece is nothing short of perfect. There are various theories regarding the real identity of “Uncle John.” At one point, you were probably intrigued too. So far, there’s no confirmation from any of the members. From the melody to the close harmony singing, it’s not totally surprising that this is among their most frequently played songs in any classic rock radio station.

We’re all wishing we were there at this show. And you would be, too, once you become a full-fledged Deadhead. Ah, talk about good times and great music! You see, Grateful Dead is one of those bands that so hard not to like. You only need one song (pick anything on this list) and guaranteed, you’d be looking for their other classic hits after. There’s something about the tracks that’s highly addicting – it could be the melody, rhythm but more often than not, it’s the lyrics. They always manage to tell a story and oftentimes, you end up trying to dissect what they mean by a specific line. This song is said to be about Bob Weir’s then-girlfriend, Frankie, whom he shared a home with for years. Anyway, this is among their most popular songs and listening to it again, this gave us goosebumps. This is like a summation of what’s missing from today’s music.

This is hands-down our ultimate favorite Grateful Dead song. We really saved the best for last. If the other songs on this list aren’t your cup of tea then we guarantee, this is the one that’s going to make you love the Dead for life. Robert Hunter wrote this while he was allegedly drinking a bottle of retsina or Greek white resonated wine. This is like the pinnacle of hippie anthems and we’re so in love with it even after all these years. The sweet harmony will send chills down your spine.

When Hunter was asked what was his favorite line that he wrote and he told Rolling Stone, “”Let it be known there is a fountain that was not made by the hands of men” [from “Ripple”]. That’s pretty much my favorite line I ever wrote, that’s ever popped into my head. And I believe it, you know?”

In one word, we can sum up this song: masterpiece.