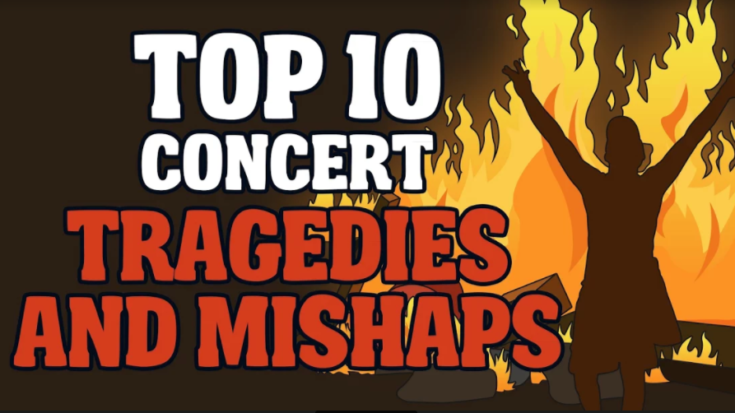 Concerts are live performances of artists and bands. They are part and parcel of the entire entity of music itself, much more with classic rock. It is a place for fans to experience the raw passion of live music. It can also be an opportunity for danger and violence. These events are vulnerable to accidents and tragedies with the combination of different kinds of people and behaviors going into one place and sometimes most of them can be under the influence of drugs and alcohol. There are times when a simple live performance can turn into total chaos. The worst ones even result in multiple fatalities. Heavy rock can also mean heavy passions and an aggressive expression of it. Though, all concert mishaps are caused by people’s violent behaviors. Some are simply caused by accidents that couldn’t be controlled. These 10 infamous concerts are more memorable for the chaos and destruction that happened in them instead of the music and the artists.

Guns N’ Roses and Metallica co-headlining a stadium tour, two of the biggest bands in the world at that time performing for 26 shows, was to make for a summer to remember. It was a rock match made in heaven that eventually ended up in hell. Axl Rose even wanted Nirvana to be the opening act but Kurt Cobain declined and good thing he did. Eight shows in, the tour stop was at Montreal’s Olympic Stadium.

It was Metallica’s James Hetfield’s burn injuries he sustained from standing on top of a pyrotechnics cannon that forced the band to cancel their set of the show that day. Now, instead of Guns N’ Roses being proactive about the incident, they tested the endurance of Canadian patience and showing up really late to the show. Frontman Axl Rose also claimed to have had a sore throat, which meant he had to cut GNR’s set short too. The usually nice Canadian audience were pushed to the edge of their frustrations when they retaliated by starting a riot resulting in looting, fires, arrests, and damages amounting to half a million dollars. Guns N’ Roses also ended up being banned from Montreal’s Olympic Stadium for life.

“The Day the Music Died” was the label the San Francisco Chronicle gave the infamous Woodstock ’99 music festival, describing in one short phrase the chaos that occurred in what was supposedly a peaceful emulation of the original Woodstock ’69, celebrating its 30th anniversary.

They had an iconic line up of musicians from James Brown to Metallica and Red Hot Chili Peppers as the closing act. The three-day celebration held in a former airbase in Rome, New York turned out to be a money-making venture than a celebration of experiencing great live music. With ridiculously priced necessities such as a bottle of water costing $5, the audience couldn’t be on their best behaviors anymore under the 100-degree summer heat. Woodstock 99 literally went up in flames. Concertgoers rioted, looted, stole cash from ATMs, and destroyed water fountains which resulted in a large mud pit in the middle of the venue. Over 1,000 people were injured and 44 arrests were made, including a gang rape case that happened in the middle of the crowd during Limp Bizkit’s set. Luckily, no one died, but that day, music festivals sure did.

‘ 70s teeny pop idol David Cassidy became popular for his role as Keith Partridge in the hit TV show The Partridge Family. He later ventured into a successful solo singing career and became one of the most popular teen idols of the 1970s.

In 1974, he announced leading up to his White City concert in London that he would be retiring from performing at 24 years old. At this announcement, hysteria ramped up and the 35,000 capacity sports arena was sold out. Fans that didn’t get tickets still stayed outside the venue, desperate to get a glimpse of Cassidy. When he finally emerged on the stage, many fan girls fainted and were trampled by the thousands of hysterical admirers of Cassidy. Hundreds were injured and one 14-year-old girl went into coma for a week before becoming the first fatality of a pop concert ever. The British Safety Council called Cassidy’s White City show a “suicide concert”.

It was one of the most violent rock concerts in the US during the peak of the era of rock n’ roll. The Altamont Speedway Free Festival was an event anticipated as the “Woodstock West”.

Rolling Stones booked a free concert in San Francisco to end their 1969 American tour as a response to critics claiming that the band was being mercenary with their expensive ticket prices.  On December 6, 1969, over 300,000 people swarmed the speedway in northern California. Rolling Stones and their production team foolishly hired the motorbike gang Hells Angels as security guards for the event, reportedly only paying them with $500 worth of free beer. The concert ended with three tragic accidental deaths two caused by a hit-and-run car accident and one by drowning in an irrigation canal and one homicide, claiming the life of 18-year old Meredith Hunter who pulled out a gun while in the audience during the set of The Rolling Stones. He was stabbed to death by a Hells Angel. Everything was caught on tape and could be seen in the 1970 documentary “Gimme Shelter”.

Rokslide Festival is one of Europe’s largest music festivals and is held annually in Rokslide, Denmark. The year 2000’s headliner was Pearl Jam and over 100,000 fans came to the concert. The band was playing to a rain-drenched crowd and the excited fans were pushing forward way too hard and trying to rush to the stage. Pearl Jam was asked to cut their set short and attempted to calm the crowd down but it was too little too late. A human stampede formed and people got trampled upon. In the end, a total of nine people were crushed to death even as other concertgoers continued to trample out of control. The Cure, who was supposed to follow Pearl Jam on the show, cancelled their set. In a dark ironic twist, Eddie Vedder later noted that the next song on their list was their hit “Alive”, and they started singing it even after those nine people lost their lives.

Damageplan was the short-lived American heavymetal band that ended because of a horrible concert tragedy. They were promoting what would be their only studio album on tour and they had a stop in Columbus, Ohio when things would turn out for the worst. A paranoid-schizophrenic ex- U.S. Marine named Nathan Gale climbed onto the stage during the band’s set and shot lead guitarist (who was also a former guitarist from the band Pantera) Dimebag Darrell right in the head multiple times. A total of five people were killed that night including the Head of Security Jeffery Thompson who fought Gale in hand-to-hand combat while the other band members escaped. Gale fired into the crowd and killed three other people. It was police officer James Niggemeyer who put a stop to the mayhem and ended Gale’s life.

It’s tragedy after tragedy for The Who when only a year after the band’s esteemed Keith Moon’s death, eleven more deaths happened that were associated to their name.

During their 1979 US tour, they had an 18,000 capacity sold-out show in Cincinnati, Ohio and majority of those tickets were on a first-come, first-served basis. Thousands of fans had already crowded the entry to the arena when the band did a late sound check of which the fans mistook for the real thing. A stampede resulted from agitated hysterical fans pushing toward the front and trampled on people who fell. A total of eleven deaths were reported along with twenty-six other people seriously injured.

The popular annual free-access electronic dance music (EDM) festival was held in Duisburg, Germany in 2010 after a long struggle to find an event host when Berlin and Bochum refused due to their inability to hold the number of projected attendees. The closed-off venue was only supposed to hold a limit of 200,000 people but a whopping 1.4 million fans attended the event. The tragic occurrences happened at the tunnel underpass entry point going to the Love Parade. It was reported that people were falling off stairs and were trampled upon by a human stampede caused by “crowd turbulence”. A total of five hundred concert goers were injured and twenty-one people tragically lost their lives, fifteen dying at the site and six in the hospital. Autopsies of the deceased showed that the fatalities were caused by crushed ribs and asphyxiation. As a result, the Love Parades have been permanently cancelled.

It’s been dubbed as the third deadliest nightclub fire in American history. The Beverly Hills Supper Club fire happened on May 28, 1977 in Southgate, Kentucky when the venue was holding an event in what was supposed to be a show that featured singer John Davidson. The nightclub’s Cabaret Room was operating well beyond capacity and the 600-capacity room was holding approximately 3,000 people, exceeding the safe holding capacity. A massive fire broke out in the room but the exits were being blocked the the crows. At midnight, the roof gave out as it collapsed into the building. The firefighters could not contain the flames and the building even continued to burn even two days after the fire first began. Over 165 bodies were recovered the morning after the tragic fire.

This concert tragedy is another testimony into why pyrotechnics should never be used in a live performance. The hard rock band Great White was headlining a show in The Station Nightclub in Rhode Island, New York. The nightclub was a small venue with only a 250-person capacity but over 400 people were attending the show. Pyrotechnics were used inside the night club which went south way too fast and ignited the foam soundproof insulation. The fire caused a panic to the crowd and they stampeded towards the main entrance. 200 people were burned and injured and over a hundred people died including Great White’s guitarist, Ty Longely. The whole disaster could have been prevented had pyrotechnics been out of the question. Daniel Biechele, the Great White tour manager along with the club owners were sentenced to 10 years of prison for involuntary manslaughter.

John Corabi Thinks His “The Dirt” Character Is…

10 George Harrison Songs That Should’ve Been For The…

Watch Paul McCartney Masterfully Come Up With “Get…