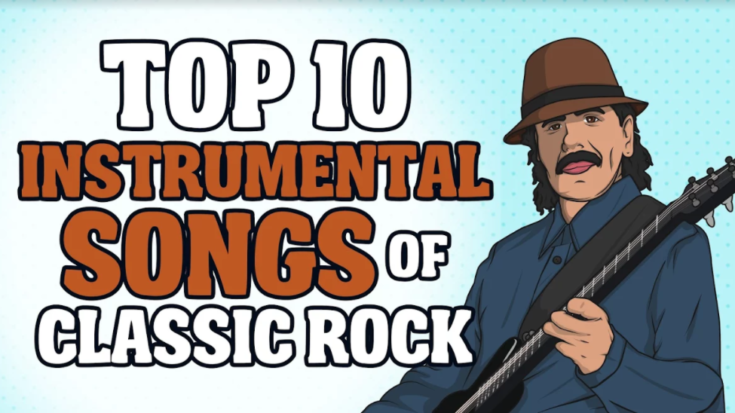 The voice of classic rock instrumentals

Classic rock songs most often showcase some of the greatest lyrics in music history with a variety of iconic vocals bringing those words to life. Not many people give as much focus and praise to classic rock instrumentals as they do lyrical songs, but not many know that some of the most invaluable music are in the form of instrumentals and it is high time these songs receive recognition. Melodies sung by the guitar, the keys, and the bass, even the percussion, highlight a band’s musicianship. Instrumental songs also pave way for individual members of the band to share in the spotlight and display their own musical talents. These musical elements, when put together, create some of the most beautiful tracks that sing beyond words. These compositions evoke emotion as much as songs with words do, speaking their messages through the dynamics of sound and the creation of themes and musical imagery. Instrumental work of classic rock bands is a rare gem in a treasure cove of great songs.

Deep Purple is most known for their massive hit “Smoke on the Water” which contains one of the most recognizable intro riffs of all time. “Smoke on the Water” is also the song that pioneered incorporating classical music, which is mostly instrumental, in blues rock. However, it’s a different track from Deep Purple that showcased their advanced musicianship as a band; “Wring That Neck” which is an entirely instrumental track from the band’s sophomore album Book of Taliesyn. It mostly features lead guitarist Ritchie Blackmore’s mind-blowing skills on guitar with his solo melodies but also displays the strong talents of keyboardist Jon Lord who delivers a powerful riff on organ. The English band’s psychedelic and progressive rock sound was definitely solidified on this instrumental track. “Wring That Neck” is still being performed in their live sets.

The Allman Brothers Band’s guitarist Dickey Betts named this award-winning instrumental track after his baby daughter Jessica who inspired him while he was writing songs in his room in 1973. His infant daughter was bouncing to the song’s melody as he played it. The song was also written as a tribute to Django Reinhardt, a Gypsy jazz guitarist who was known to play using only two fingers on the left hand. The original track run at seven minutes and thirty seconds, featuring Betts on lead guitar, Les Dudek on acoustic guitar, Chuck Leavell on electric piano and grand piano and Gregg Allman on the Hammond organ playing the bottom harmony line. “Jessica” was released as a single following their massive hit “Ramblin’ Man”  to critical praise, though it did was not a chart success. The track is more popularly recognized today as the theme music to the BBC Two TV show about cars, Top Gear.

Santana gained massive critical and commercial success with creating a fusion of rock, jazz, and Latin sounds on their debut album. On their sophomore album Abraxas, other elements such as salsa and blues were added into that fusion, making it another success, with the album making it to the top of the U.S. charts. That successful mix of musical influences was highlighted on the instrumental track “Samba Pa Ti” where Carlos Santana displayed his undeniable style of bluesy latin guitar playing. This classic slow-burning piece has latin percussion combined with consistent jazz-rock style. Originally, the song (which translates to “Samba For You” in English) was a combination of two separate unfinished pieces, with the first part starting slow and emotional, escalating to a faster tempo into the second part. The track established truly unique blend of Latin American / Blues / Rock style of Santana and was selected preservation in the National Recording Registry due to its “cultural, historic, or artistic significance.

Booker T. & the M.G.s started as the house band for Stax Records, the soul music label of Memphis, Tennessee. They were sessionists for the recording of many Stax artists in the 1950s and ‘60s including Otis Redding, Isaac Hayes, and Wilson Pickett. In between these sessions, they would record their own material and one of thouse would be the great instrumental track, “Green Onions”. The R&B and funk track features a 12-bar blues tune and an unusual 2/4 time signature. Also unusual, it wasn’t the guitar that was the highlight of this instrumental but the drums and the Hammond organ. The song has, according to Booker T. Jones himself, an “apparent simplicity” that contributed to its success. Although it appears and sounds simple, Jones continues to go on the record saying the song is “…just not as simple as it sounds.”

Eric Johnson is a guitarist mostly known for his versatility in playing the acoustic, lap steel and bass guitar; and on the instrumental track “Cliffs of Dover”, he truly displays his undeniable musical talents through the jaw-dropping guitar solos featured on it. The song won a Grammy for Best Rock Instrumental Performance in 1990 and is a featured song on the widely popular video game, Guitar Hero III: Legends of Rock.

The song’s intro begins with an ad-libbed electric guitar solo and without any distinct time signature. The song has more of a freestyle vibe, especially on the coda. It was inspired by the White Cliffs of Dover that runs along the southeast coast of England and was, according to Johnson, written in only five minutes. He claims that the song was “kind of a gift from a higher place that all of us are eligible for”.

Having a commercially successful instrumental track is a rare feat for any band, a feat that The Edgar Winter Group was able to achieve with their instrumental single “Frankenstein”. The song rose to the the top of the US Billboard 100 chart in May 1973, and stayed there for an entire week only to be replaced by Paul McCartney’s “My Love”. The song was also certified platinum, having sold over one million copies in the U.S.

The Edgar Winters Group featured multiple instruments on the track, including guitar, drums, keyboards, saxophone, clarinet, marimba, and the timbales, proving that the song was truly living up to its category as instrumental. It also features a “double” drum solo by drummer Chuck Ruff and with Edgar Winter on percussion. The working title of “Frankenstein” was originally supposed to be “The Double Drum Song”. It was one of the few instrumentals that was requested on radio, catapulting it to becoming a hit.

When it comes to the best classic rock instrumentals by Led Zeppelin, it’s going to be a toss up between “Black Mountain Side” and “Moby Dick”. With John Bonham’s insane drum solo, John Paul’s heart-thumping bass taps, and and Jimmy Page’s legendary guitar riffs, “Moby Dick” has got to win the title on this one. Even in the absence of Robert Plant’s signature vocals, Led Zeppelin delivers on this track, showcasing their unmatched musical skills and unique style of folk and hard rock.

During live shows, Bonham’s solo would last from a range of 6 minutes to as long as 30 minutes. The rest of the bands would even leave the stage during Bonham’s solo when it lasts that long, after they have played the intro of the song.

This psychedelic rock, funk, R&B, soul and doo-wop fusion instrumental song is an experience of its own. “Maggot Brain” is the funk-psychedelic rock band (aptly named) Funkadelic’s instrumental track from their third studio album of the same name. The band is fronted by George Clinton, who innovated punk with a blend of various genres. The track has a slow build-up but reaches its climax during guitarist Eddie Hazel’s emotionally nostalgic solo. Recorded during late 1970 at Universal Studios in Detroit, the original recording of the song was actually over ten minutes long. . Ironically, shortly after the recording of “Maggot Brain” wrapped, band members Tawl Ross, Billy Nelson, Tiki Fulwood, and even lead guitarist Eddie Hazel all left the band.

Jeff Beck has many instrumental tracks that are worthy of note, one which is “Beck’s Bolero”, but it was his jazz fusion piece “Cause We’ve Ended as Lovers” that established him as a solo artist after being part of The Yardbirds and The Jeff Beck Group. The British guitar hero displays his amazing guitar skills in this innovative instrumental track from his second album Blow by Blow, but the first he released under his solo name. “Blow by Blow” was an instrumental album that was certified platinum and peaked at #4 on the Billboard 200 chart in 1975. “Cause We’ve Ended as Lovers” was penned by Stevie Wonder, who also played the clavinet on another song in the album, “Thelonius”. The song runs at five minutes and forty0three seconds, and features a virtuoso guitar lead that emulates a heartbreak cry. The iconic track tells a story with just its melody.

In “La Villa Strangiato” (An Exercise in Self-Indulgence), Rush showcases their indisputable precision and skill in music on their first instrumental track. What is unique about this 1978 single is the complexity it presents, with the song being divided into 12 segments, and running almost 10 minutes long. The track also features multiple instruments such as the like guitar, string synthesizer, bass and drums. The 12 parts are as follows:

I– Buenos Nochas, Mein Froinds!, II– To Sleep, Perchance To Dream, III– Strangiato Theme, IV– A Lerxst in Wonderland, V– Monsters!, VI– The Ghost of the Aragon, VII– Danforth and Pape, VIII– The Waltz of the Shreves, IX– Never Turn Your Back on a Monster!, X– Monsters! (Reprise), XI- Strangiato Theme (Reprise), XII– A Farewell To Things. All 12 parts tell a story, with a plot and characters based on the nightmares of Alex Lifeson. The song was so complicated that the band had trouble playing it live during its early days. “La Villa Strangiato” is frequently used in cartoons including The Simpsons, Ren & Stimpy, Duckman, Batfink and Animaniacs. It’s also used Cartoon Network’s theme song, and throughout the Disney film Honey, I Shrunk the Kids!