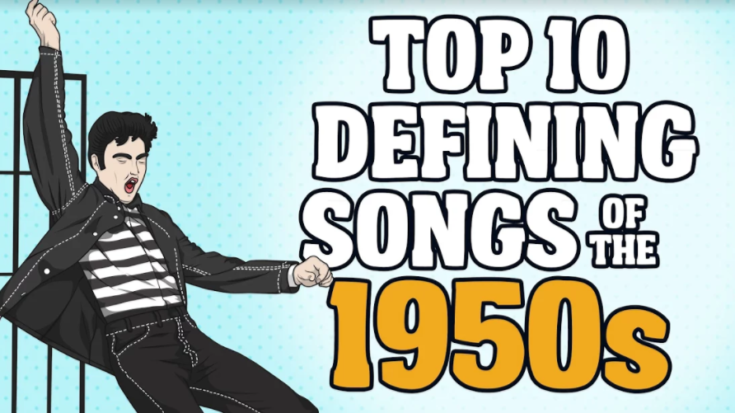 The beats be cruisin’ for a bruisin’!

It’s the era when rock & roll first burst upon us in all its glory, dominating the popular music industry and taking it by storm. The 1950s was a time of the jukebox, the disc jockey charts, and the importance of the ultimate summer jam! Evolving from the blues and rhythm music of the late 1940s, rock and roll dominated popular music in the later half of the 1950s. Stemming from the late 1940s into the early 1950s, this significant musical revolution saw a reversal in mainstream popular music by slowly letting go of the soft ballads and big band hits and beginning to embrace a new musical evolution with a combination of various black musical genres fused with country and western pop. These birthed a dancing culture of fun hitching up of skirts and loosening of neck ties in a more liberal, care-free attitude towards post-war prosperity.

Here are the top 10 songs that defined the decade of the ’50s:

This 1956 hit made popular by acclaimed New Orleans pianist Antoine ‘Fats’ Domino was such a popular and successful song during the 1950s that its hard to get it off your head once you listen to it. It was actually originally written in the 1940s by jazz singer Glenn Miller and was later on revived by Louis Armstrong. Even Elvis Presley and Little Richard did their own renditions of this classic but it wasn’t until Fats Domino’s covered it that the song hit big time. His smooth sound and carefree rhythm was the drive for the song to become such a commercial success. Fats Domino was one of the first generation rock & roll stars that made such a massive influence on later iconic artists such as Elvis Presley, John Lennon, and Elton John. To this day, it remains as the most successful song of Domino’s career.

“Summertime Blues” is a 1958 classic revolutionary ‘rockabilly’ song that combines southern bluegrass with modern rock. Written and recorded by then-19 year old handsome crooner Eddie Cochran, “Summertime Blues” highly appealed to teenage fans of the 1950s. The lyrics speaks about the hardship of youngsters being held back by society and authority figures. The fresh, fun, catchy, straightforward upbeat summer sound was an even bigger hit to the pop demographic. It was very unfortunate that Cochran passed away in a fatal car crash while sitting in the back of a cab just two years after hitting it big with this summertime track. He was just 24 years old, thus ending his short-lived but highly successful almost 4-year career. It is through his classic songs that his legacy continues on. “Summertime Blues” has been covered by many high-profile musicians such as The Who, Beach Boys, The Sex Pistols , and even Bruce Springsteen. The song was into the Grammy Hall of Fame in 1999 and ranked number 73 in Rolling Stone’s “500 Greatest Songs of All Time.” Rock and Roll Hall of Fame included the song in its list of “Songs That Shaped Rock and Roll”.

Though Buddy Holly only had a short-lived career until his life was tragically taken too soon by a fatal plane crash at the young age of 22, his legacy is so influential in the entirety of the history of music. An iconic song that represents his imprint in the industry would be the 1957 classic hit, “Peggy Sue”. Along with his back band “The Crickets”, Holly wrote, produced, and performed “Peggy Sue” which reached number three on the Billboard Top 100 chart in 1957. Originally supposed to be titled “Cindy Lou” after Holly’s niece, the song  was released on Holly’s eponymous album in 1958. The timeless and effectively infectious track ranked number 194 on Rolling Stone magazine’s list of the “500 Greatest Songs of All Time”. It is the 106th greatest song of all time and the third best song of 1957 as ranked by Acclaimed Music. Its success also include being part of NPR’s  “100 Most Important American Musical Works of the 20th Century” and being inducted into the Grammy Hall of Fame in 1999. Holly’s influence reached to the greatest artists of all time such as The Beatles, The Rolling Stones, Eric Clapton, and Elton John.

Little Richard’s 1955 revolutionary hit classic track changed the music industry in many unusual ways. The song itself is pioneering musically and lyrically at the time. The opening verbal rendition “A-wop-bop-a-loo-bop-a-wop-bam-boom!” is a drum pattern Little Richard had imagined as he was writing the song while washing dishes in the kitchen of a Greyhound bus station in his hometown of Macon, Georgia. The song shaped rock and roll musically with the use of the double entendre and the raunchy and high-volumed vocal style over a distinctive upbeat blues rhythm. The song was hailed as No. 1 on Mojo’s The Top 100 Records That Changed The World in 2007. It was dubbed as “the sound of the birth of rock and roll.” The song was added to the U.S. Library of Congress National Recording Registry  in 2010 and in 2012, Rolling Stone magazine stated that the lyrics “A-wop-bop-a-loo-bop-a-wop-bam-boom!” is considered the most inspired rock lyric ever recorded.

Don’t think religion can get in the way of making one the biggest rock and roll hit singles of all time. Jerry Lee Lewis was initially hesitant to record his career-defining single “Great Balls of Fire” because his church background would make him find the lyrics written by Otis Blackwell sinful and blasphemous. It was going to be a controversial song for him to record and release but luckily for the entirety of the music industry, he put those religious beliefs aside and came out with the chart-topping rock and roll classic of which its legacy is securely cemented in the history of music. It’s Lewis’ high-energy swaggering vocals and upbeat piano acrobatics that drove “Great Balls of Fire” to the top of the charts. It’s been widely regarded as one of the most influential songs in rock history, having sold a million copies on its first day of release in 1957, also making it one of the world’s best-selling singles of all time. It also placed number 96 on Rolling Stone’s list of the 500 Greatest Songs of All Time.

“La Bamba” has probably one of the catchiest choruses of all time. This 1958 adaptation of a Mexican folk song was popularized by Mexican-American teen singer Ritchie Valens. Valens is considered a forefather of the Chicano rock movement in the 1950s and one of the pioneers of early rock and roll. Valens was only 17 when he recorded this Mexican dance classic track and didn’t even get a chance to turn 18 when he met his tragic death along with fellow rock and roll musicians Buddy Holly and J. P. “The Big Bopper” Richardson on a fatal plane crash known as “The Day the Music Died”. Valens was later inducted into the Rock and Roll Hall of Fame in 2001.

The song is entirely sung in Spanish and it is easily one of the most recognizable tunes of the decade. It is ranked number 354 on Rolling Stone magazine′s list of the 500 Greatest Songs of All Time, the only song on the list sung in a language other than English.

One of the most memorable slow ballads of the 1950s would be Johnny Cash’s first humber one hit, “I Walk The Line”. Released in 1956, it hit number one right away on the Billboard charts. The depth of the music combined with legendary lyrics makes this single an iconic masterpiece of the decade. The unique chord progression of the song sprung out from Johnny Cash experimenting with reversing the guitar sections on an old tape recorder. The writing process was just pure genius. Although the song was re-recorded and remastered a couple of times, nothing beats the original from Sun Records. The success of the song is reflected in its performance on the record charts, remaining for over 43 weeks!  “I Walk The Line” is part of Rolling Stone’s list of the “500 Songs That Shaped Rock and Roll”. It is also part of the Rock and Roll Hall of Fame and sits at No. 30 on the list of the 500 Greatest Songs of All Time.

“Rock Around the Clock” by Bill Haley & His Comets was called by Dick Clark as “The National Anthem of Rock ‘n’ Roll.” It was written in the 12-bar blues format by lyricist Max Freedman and Jimmy De Knight in 1952 and was released by Bill Haley on May 20, 1954. The song rose to the charts and is considered one of the cornerstones of rock music. Although very popular and highly successful, the song is not actually the first rock and roll record ever. It is, however, considered as one of the songs that brought rock and roll into the mainstream. Its legacy is secured in its place as 158 on the Rolling Stone magazine’s list of The 500 Greatest Songs of All Time.

This list would not be complete without an Elvis Presley classic on it. Elvis has made so many songs iconic and one of those would be his 1957 hit single “Jailhouse Rock”. This track along with his previous single “Hound Dog” prior to the release of “Jailhouse Rock” has become anthems for the rock and roll revolution of the 50s. Many could claim that Elvis was the face of the fifties, his name is in fact, one of the most famous ones from that particular decade in entertainment history. This song has also proven to be such a legacy, securing the 67th spot on Rolling Stone’s list of The 500 Greatest Songs of All Time. Among its many accolades include being named one of The Rock and Roll Hall of Fame’s 500 Songs that Shaped Rock and Roll and also being recently inducted into the Grammy Hall of Fame. Topping the Billboard charts, the track is also certified double-platinum having sold over 2 million copies. With its bluesy sound and stop-start rhythm, no one can deny that “Jailhouse Rock” really helped define the music of the 50s.

It’s has one of the most recognizable introduction riffs of all time – and with those rolling piano ad libs and high energy rhythm Chuck Berry’s 1958 iconic hit is a 1950s music legacy. Based on Chuck Berry’s own autobiography about a boy from humble beginnings with a staggering skill on guitar and a dream of making it big in the business, the song hit it big with young audiences from its decade and beyond. It is also credited as the “first rock & roll hit about rock & roll stardom”. Upon its release, it peaked at number 2 on the Billboard charts. It has also been widely covered by the biggest stars in rock n’ roll including B..B. King. The Beatles,  Bruce Springsteen, and has been ingrained in the mainstream popular culture as part of the soundtrack of films such as “American Graffiti”, and most famously played by Marty McFly in “Back to the Future”. Aside from ranked seventh on Rolling Stone’s list of the “500 Greatest Songs of All Time” and being inducted into the Rock and Roll Hall Fame, the greatest accolade of “Johnny B. Goode” would be being one of four American songs included on NASA’s Voyager Golden Record, attached to the Voyager spacecraft as representing rock and roll,  among many cultural achievements of humanity.