Top 10 Classic Rock Anthems You Should Know By Heart 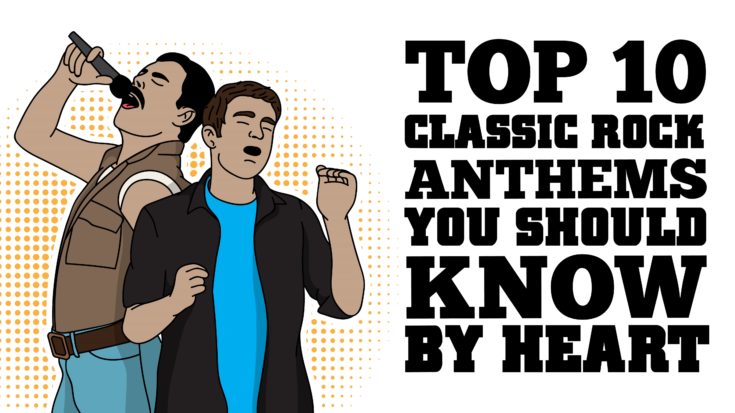 The Songs Everyone Knows

A bit overrated? Maybe. But the fact of the matter is, anyone who likes classic rock has most likely heard these songs at least once in their life. They’re those tracks with heavy radio airplay that you always end up singing along to.

Let’s check out who made it to this list:

The only people who don’t know this song are those living under a rock. You can hear this almost everywhere but it’s more often associated with boxing thanks to the British World Heavyweight Champion Boxer Frank Bruno who covered it during his championship coronation.

“At first, we wondered if calling it “Eye of the Tiger” was too obvious. The initial draft of the song, we started with “It’s the eye of the tiger, it’s the thrill of the fight, rising up to the spirit of our rival, and the last known survivor stalks his prey in the night, and it all comes down to survival.” We were going to call the song “Survival”. In the rhyme scheme, you can tell we had set up “rival” to rhyme with “survival”. At the end of the day, we said, “Are we nuts?” That hook is so strong, and “rival” doesn’t have to be a perfect rhyme with the word “tiger”. We made the right choice and went with “Eye of the Tiger”.” – Jim Peterik

It’s also worth mentioning that it’s been the subject of various parodies including “Weird Al” Yankovic’s Theme from Rocky XIII (The Rye of the Kaiser).

While U2 isn’t exactly everyone’s cup of tea (Bono gets a lot of hate and we don’t know why), you can’t deny this song’s popularity. However, despite enjoying massive commercial success, it was not without controversy especially since it was written for Martin Luther King, Jr. Still, it has become one of U2’s most popular tracks and was even ranked at no. 388 on the 500 Greatest Songs of All Time list by the Rolling Stone magazine.

“I looked at how glorious that song was and thought: ‘What the f*** is that all about?’ It’s just a load of vowel sounds ganging up on a great man. It is emotionally very articulate – if you didn’t speak English.” – Bono

The Edge’s guitar playing is so impressive it will blow you away. It will make you think that no one’s making music like this anymore. And it only made us want to go back to these days.

That intro is everything – enough said. Although it’s virtually impossible to pick only one favorite song from The Who, this is definitely in the top 5. Pete Townshend said that he wrote it about all the desolated teenagers he saw during Woodstock. That’s also the reason why people often mistake the title as “Teenage Wasteland.”

“There is this moment of standing there just listening to this music and looking out to the audience and just thinking, ‘I f–king did that. I wrote that. I just hope that on my deathbed I don’t embarrass myself by asking someone, ‘Can you pass me my guitar? And will you run the backing tape of ‘Baba O’Riley’? I just want to do it one more time.” – Pete Townshend to Rolling Stone

It doesn’t really matter whether you call it “Baba O’ Riley” or “Teenage Wasteland.” As long as you’re listening to this incredible piece of rock, you’re good.

One of The Rolling Stones’ most enduring and well-loved hits, it always takes us back to the good ‘ole days. Thanks to the three-note guitar riff from Keith Richards (it came to him in a dream if you believe the story) which opens the song, it’s easily recognizable. And well, it should be a crime not to groove with the music.

“It sounded like a folk song when we first started working on it and Keith didn’t like it much, he didn’t want it to be a single, he didn’t think it would do very well. I think Keith thought it was a bit basic. I don’t think he really listened to it properly. He was too close to it and just felt it was a silly kind of riff.” – Mick Jagger

If the band could be defined by one track then this is it. It’s bold, unapologetic and it rocks hard.

To say that this is a crowd favorite would be a total understatement. It’s the very definition of a rock anthem. The opening keyboard riff is undeniably one of the best parts but the real highlight is of course, Steve Perry’s vocal performance. It’s mind-blowing how he managed to sound better live than any of their studio recording.

“[The song] gives the listener permission to dream. I think everyone wants to believe the grass is greener somewhere else.” – Jonathan Cain

“I was digging the idea of how the lights were facing down, so that you couldn’t see anything. All of a sudden I’d see people walking out of the dark, and into the light. And the term ‘streetlight people’ came to me. So Detroit was very much in my consciousness when we started writing.” – Steve Perry

It may not be their biggest hit but it sure stood the test of time!

Inspired by the political changes in the ‘80s, this song is directed at the George H.W. Bush administration and the lyrics even directly referenced some of the famous lines from his campaign speeches. It has been covered numerous times and it’s basically an anthem about the collapse of communism. It was Frank Sampedro who came up with the title when he said:

“Whatever we do, we shouldn’t go near the Mideast. It’s probably better we just keep on rockin’ in the free world.”

The thing is, this song still enjoys massive popularity because the message never gets old and continues to stay relevant up until today. And if anything, Neil Young can still rock it. Every note he plays just gets to you. The man clearly has an overflowing passion for music and it translates to his audience. No one does it better than him. That tune is just everything!

If you don’t start headbanging when this comes on then there’s seriously something wrong with you. When it was released back in 1968, it totally rocked. Almost half a century later, it still managed to sound so bad ass. From the moment it comes on, you can only think of one thing: bikers (thanks to being used as a soundtrack in the “Easy Rider” film). So ignore your neighbors and just crank it up! If they have good taste, they wouldn’t mind.

“I was walking down Hollywood Boulevard one day and saw a poster in a window saying ‘Born to Ride’ with a picture of a motorcycle erupting out of the earth like a volcano with all this fire around it. Around this time I had just purchased my first car, a little secondhand Ford Falcon. So all this came together lyrically: the idea of the motorcycle coming out along with the freedom and joy I felt in having my first car and being able to drive myself around whenever I wanted. ‘Born To Be Wild’ didn’t stand out initially. Even the publishers at Leeds Music didn’t take it as the first or second song I gave them. They got it only because I signed as a staff writer. Luckily, it stood out for Steppenwolf. It’s like a fluke rather than an achievement, though.” – Mars Bonfire

Although there’s some debate whether it’s the first time the term ‘heavy metal’ was used or not, it’s  still one of those that made it more popular.

Though she wasn’t the original recording artist, Joan Jett still hit big time with “I Love Rock ‘n Roll.” It’s highly addictive and that makes it almost impossible to forget once you hear it. It was a huge success for her and it eventually landed on no. 56 of the Billboard’s Greatest Songs of All Time.

“I did a very early version with them, it was great working with them, and no, there was no sense of trepidation on my part, despite the fact that everyone was telling me they were the most notorious band on the planet.” – Joan Jett on the version she recorded with The Sex Pistols

Joan Jett’s one of our heroes and she’s a real bad ass. Don’t you just love her in-your-face attitude? Because we’re totally digging that. Others can make cover versions but this will remain as our favorite. BRB, we’ll just put the volume on max.

It’s a classic rock anthem, period. And we’re pretty sure no one dares argue with that. We practically grew up listening to this song and it’s no surprise it’s one of Bruce Springsteen’s most popular tracks. It talks about the effect of the Vietnam War to the American people and also the kind of treatment that veterans received the moment they come home.

“I make American music, and I write about the place I live and who I am in my lifetime. Those are the things I’m going to struggle for and fight for.” – Bruce Springsteen to National Public Radio in 2005

It’s definitely one of the most misunderstood songs we’ve ever heard. So many people miss the point and don’t realize that this is a message of war protest. When you look closely, the lyrics are pretty dark. Still, that doesn’t take away the fact that it remains a very popular rock anthem.

If you told us you don’t know the lyrics by heart, you should be aware that there’s a special place in hell for liars who don’t admit they love Freddie Mercury. The devil himself will send you back because, how dare anyone deny that Queen ruled the world and still does? Seriously you guys, anyone who likes rock ‘n roll fully acknowledge that this is the number 1 rock anthem ever. Should we repeat that? Nah, you probably already know that by now.

“We did an encore and then went off, and instead of just keeping clapping, they sang “You’ll Never Walk Alone” to us, and we were just completely knocked out and taken aback – it was quite an emotional experience really, and I think these chant things are in some way connected with that.” – Brian May

We lost count how many times this has been referenced, sampled, covered and even parodied – there’s even an animal version of this!