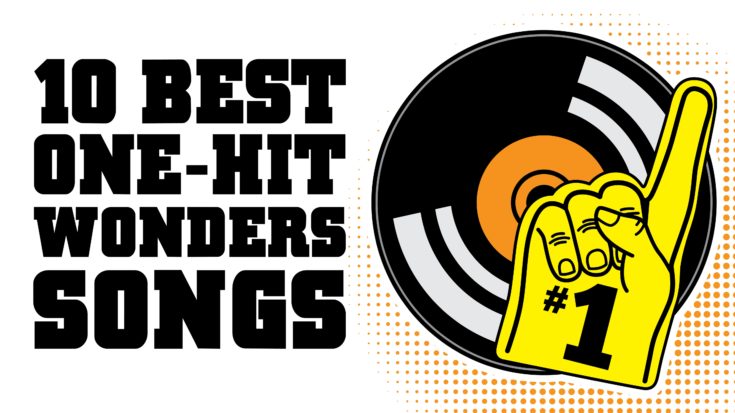 It Takes ONE Massive Single Success

It doesn’t really matter if these are one-hit wonders. At least we got to enjoy them for four minutes or more. So you may ask, how did these rock acts make it to this list? It’s when none of their other works ever made it close to the success of their one song. Sure, they’ve had other tracks but never as popular as that one hit that made them famous… even for a short while.

Besides, sometimes all you need is one classic hit.

The first time you hear it, it packs a lot of punch. At some point, you probably thought it’s one of the greatest songs you’ve heard. That is, until it eventually lost its luster. Still, this track propelled The Verve towards international stardom because they enjoyed massive success from it. However, it wasn’t without controversy. When you check some of the song facts, you might wonder why Mick Jagger and Keith Richards received songwriting credits. The thing is, the group received clearance for the rights to a six-note sample of the instrumental version of The Rolling Stones’ “The Last Time” but former Stones manager Allen Klein claimed that they used a larger portion, thus breaking the agreement. So when it became a hit single, The Verve was sued but they settled out of court. “Bittersweet Symphony” received heavy airplay on MTV, received numerous nominations, was featured in commercials, video games and also used during some sports events.

First off, this has a nostalgic feel to them. It makes you want to get-together with your friends this weekend. Aside from being frequently played during Irish Rugby matches, it was also featured in numerous ads and commercials for big brands like Wrangler jeans, Nissan’s Heisman House and Chase Bank. Inspired by their fans, this is the track that became a worldwide hit for Thin Lizzy. Before it was released, the group was already enjoying popularity in Ireland. In any other part of the globe however, very few people heard of them let alone their music. Though they’ve had other hits in the UK, this was the only track that managed to make it in the top 40 in the US. The thing is, the group didn’t expect it to be a hit. According to guitarist Scott Gorham, “To tell you the truth, we weren’t initially going to put ‘The Boys Are Back In Town’ on the Jailbreak album at all.”

Though they’ve had other successful singles, this one was their biggest selling hits in the UK after it spent four weeks at the top of the charts. In the US, it was their only major hit. Marc Bolan took inspiration from the Chuck Berry song “Little Queenie.” In fact, the last line of “Bang A Gong (Get It On)” which is “And meanwhile, I’m still thinking…” was a clear nod to the classic hit. Yep, it has the same exact words. Indeed, the song became a shining moment for the glam rock act. It’s probably because of the highly addicting and hypnotic groove but there’s something about it that makes you want to put it on repeat. It’s like a sin against rock if you play it just once. It has become influential. Joan Jett even told Gibson, “The first records I remember really inspiring me to play guitar were T. Rex ‘Bang a Gong’ and Black Sabbath ‘Iron Man’ and the first New York Dolls record.”

This is pretty much one of the reasons why the ‘70s rocked. We’re pretty sure you’ve already heard this at some point. Besides, when it was released, it became an instant hit right out of the box which isn’t even remotely surprising because the groove and rhythm – man, they’re everything. It peaked at no. 18 on the U.S. Billboard Hot 100 and at no. 14 on the U.S. Cash Box Top 100. Although it was a huge success, it wasn’t without controversy because the Congress of Racial Equality and a civil rights group called for a boycott due to the song’s lyrics. Still though, this track sounds like it just came out yesterday. But the thing is, this is kind of a once-in-a-lifetime. We’ll never enjoy music like this ever again. No one can come close to the intensity and raw enthusiasm of the group. And yes, we just love it so.

Would you agree if we say this is perhaps the greatest Southern Rock song ever written? This is to the group what ‘Free Bird’ is to Lynyrd Skynyrd – basically an anthem, a signature track. One of the features includes a flute introduction by Jerry Eubanks which gave it a distinctive sound. It was played in the background of several films: Johnny Depp’s 2001 biographical crime “Blow,” Christopher Walken’s 2001 movie “Scotland, PA” and Joshua Michael Stern’s 2008 comedy drama “Swing Vote.” It was even featured in some ads like the 2011 Busch Beer commercial and another one advertisement for the Gatlinburg, Tennessee tourism in 2012. What’s the secret to this iconic song? Nothing but pure, raw talent. It’s the kind of music that makes you want to go back in time – does anyone else feel nostalgic after listening to this? We could put this on loop for eight hours straight and still love it.

This is hands-down the biggest hit in the entire career of the American heavy metal band Ratt and it peaked at no. 12 on the US Billboard Hot 100. The song made it to the 51st spot in the “100 Greatest Songs of the 80’s” list by VH1. It was featured in the 2008 sports drama movie “The Wrestler” and also in the 2012 comedy film “That’s My Boy.” It even appeared in numerous video games such as Grand Theft Auto: Vice City Stories, Guitar Hero Encore: Rocks the 80s, Guitar Hero: Smash Hits, Guitar Hero Live, Rock Band 2 and Saints Row. It’s undeniably a decade-defining music which earned heavy airplay both in the radio and from MTV. The debut album itself, “Out of the Cellar” was a massive success and it received platinum certification from the RIAA. The group’s later work couldn’t come close to what they accomplished with “Round and Round.”

This is the group’s only single that made it to the top 40. It peaked at no. 21 on the US Billboard Hot 100. Of course it helped that the official music video was receiving heavy rotation on MTV. It has been featured in the television show “Person of Interest,” 2015 animated adventure movie “The SpongeBob Movie: Sponge Out of Water,” and the 2016 family comedy film, Middle School: The Worst Years of My Life. It was also used for the campaign of Paul Ryan in 2012 and Donald Trump in 2016.

According to Twisted Sister’s frontman Dee Snider in an interview with with the Boom 97.3 FM, “There’s a lot of history with that song. There’s a lot to tell about that song. Many people think — it was accused of [being written as] the ‘great pop song,’ the ‘sellout song.’ … At the time, there were people who thought we deliberately wrote some sort of pop anthem that was gonna put us over the top.”

Admit it, at one point, you found this highly addicting and irresistible. Still though, there are people who find the entire song annoying. Then again, the band is still raking in some serious cash through royalty checks so they’re basically laughing on their way to the bank. It topped the charts in 25 countries and peaked at no. 8 on the US Billboard Hot 100. This is undoubtedly Europe’s most successful single and also became their most popular track. It was a worldwide hit.

According to Joey Tempest, “It’s always a nice feeling. Sometimes you hear it on the streets or someone has it on their mobile phone or something… it’s a nice feeling! Actually, I did an interview about a year ago with a newspaper from America and they talked about how much it’s been used in sports in America… which I didn’t know so much about. Apparently it has been used a lot and it was nice to hear. The ironic thing, though, is that the song was actually written for the fans. It was over six minutes long and was never meant to be a hit or anything like that. It was meant to be an opening for the ‘live’ show.”

“What’s Up” is almost always included in every list for the greatest one-hit wonders and it’s no surprise why. When it was released, it was a huge hit in Brazil and several European countries. It peaked at no. 14 on the US Billboard Hot 100 and the single even went gold. It was also featured in the comedy drama movie “Young Adult,” the Netflix series “Sense8” and in the music video game “Rock Band 4.”

According to bassist Christa Hillhouse, “Even by the end of the ’80s, the record companies had really switched to where they were looking for that band that had that one hit. They wanted one hit, and then who knows after that – they didn’t really develop acts anymore. When we got signed, they knew ‘What’s Up’ sounded like a hit.” And yes, that’s what they got. Because it was on heavy rotation on MTV, the video helped their album sell more than 6 million copies.

Sometimes, it doesn’t really matter if you only have one hit – just as long as it’s a massive one. J. Frank Wilson and the Cavaliers recorded their version of “Last Kiss” (originally by soul singer Wayne Cochran) and it gained instant success. It made it to the top 10 and eventually peaked at no. 2 on the US Billboard Hot 100. They sold over one million copies and were awarded with a gold disc. The band had other recordings but nothing would come close to how successful “Last Kiss” was. The first time you hear it, it sounds catchy and fun enough but the more you listen to it, the more you realize just how sad the story is. Rumor has it that the track was based on a true story – the car accident of two teens while on a date a few days before Christmas, they were both sixteen years old at the time.

Originally performed by English glam rock band Slade, Quiet Riot covered the song 1983. It was a major hit right out of the box and it peaked at no. 5 on the US Billboard Hot 100 and was eventually certified gold by the RIAA. It also ranked at no. 80 on the “100 Greatest One-Hit Wonders” list by VH1. Initially, however, Quiet Riot didn’t like the track and hated it so much that they even went so far as to intentionally play it so poorly so the label wouldn’t release it.

Jim Lea told Record Mirror magazine, “Quiet Riot phoned us up and asked if they could use the song. They were a bit cheeky really because they had already recorded it. I think they’ve done a very good version and the song is a classic.” We totally agree that this is a glam rock classic and a real masterpiece at that.