7 Ways Rockstars Rake In Cash – Can You Guess All Of Them? 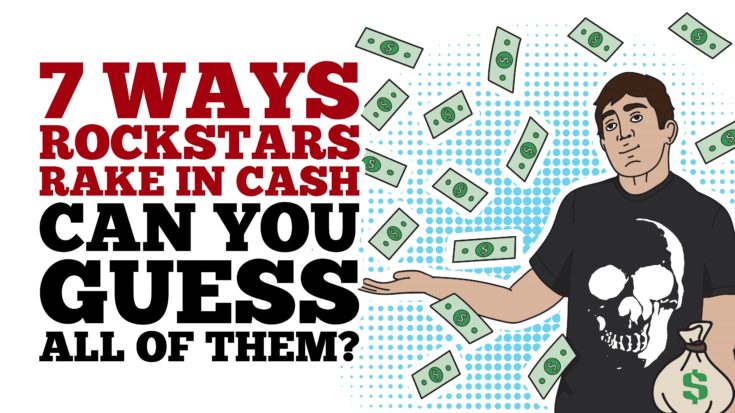 Where The Money’s At

The rock star lifestyle – multi-million homes, luxury cars, exclusive getaway spots. They have money to burn, obviously. But how do they make all these $$$? Before, there were vinyl records, cassette tapes or CDs that fans go crazy over. So, how about today – when there’s streaming and few people actually bother going to record stores? Where do they get their millions?

In 2015, it was reported that Paul McCartney earns approximately $323,000 in royalties for his song ‘Wonderful Christmastime.’ Led Zeppelin’s classic masterpiece ‘Stairway to Heaven’ also made an estimated total of $12 million in royalties alone. You see, there are so many commercial opportunities for massive hits like these. Think about it, if you’re a one-hit wonder and managed to release only either of the tunes mentioned above, you can definitely retire with the earnings. Also, nowadays, most listeners prefer using streaming apps like Spotify and iTunes. Unfortunately, however, artists don’t earn much from there because they pay very little. If any musician aims to earn at least $1,260 per month, he/she should have at least 1,117,021 plays. One of the highest earning pop act in Spotify, Calvin Harris, had a total payout of $260-360k back in 2014 but his total streams were at 42.7M. Still, that’s not so bad.

There are plenty of rock stars who take home some serious cash with their merchandise. One of the most profitable products is perfume. This is not an uncommon practice, by the way. From Tim McGraw to Faith Hill, they have their own lines. But that’s not all. Some even venture into the clothing industry – e.g. Bono’s EDUN and Liam Gallagher’s menswear label, Pretty Green. Still, however, having a huge fan base doesn’t guarantee massive earnings. Nevertheless, it’s never a bad idea to add another income stream to their portfolios. But wait, if we’re going to talk about rock stars raking in money with their merchandise, then look no further than Gene Simmons and KISS. They sell condoms, action figures, board games, trading cards, toy guitars and… wait for it, coffins. So basically, there’s no limit as to the product category you can sell. It may sound laughable but KISS managed to create a one-billion-dollar brand which is so dang impressive.

Of course, the payout depends whether you’re a rising star or an established superstar. For emerging artists, they could earn about $5-100k for every 1-2 year contract in endorsement deals. For someone with a big name in the industry, however, it can go for $100k-5M. Remember Steven Tyler’s Skittles ad for the Superbowl? While we don’t have the exact number as to how much the Aerosmith frontman was paid, one thing’s for sure – it’s not cheap. Besides, it’s been ranked as one of the most effective celebrity endorsements for last year’s Superbowl so we can only guess the amount. Well, there’s also Iggy Pop’s commercial for an auto insurance and who would forget Alice Cooper’s ad for the Staples’ Back to School campaign? Or the Prince of Darkness’ now-famous line “I Can’t Believe It’s Not Butter?” So you see, it’s more than just music. Endorsement deals are pretty huge too.

Now, this is the time to thank the internet. You see all these YouTube sensations and celebrities and think, how the heck do they make money? Through monetization, a music video with ads could earn around $2 for every 1,000 views. Also, you’ve probably seen those with Vevo watermarks. As it happens, they have a partnership with YouTube and some major record labels. Artists also take a cut every time you watch those official music videos. Another method is when the video contains links to Google Play, Amazon or iTunes. Buying the track may cost just around $1.20 for every download but put them together and rock stars will still be laughing on their way to the bank. Of course, because so many viewers visit YouTube on a daily basis, some music videos are sponsored by big companies such as Samsung. How much could they potentially earn? Well, we don’t have the exact numbers but it’s probably more than six digits.

Late Night Talk Shows are tricky. Aside from relevant celebrity guests, they need a REALLY good band to add some oomph to the show. Jimmy Fallon’s The Roots get around $1 million per year and also have the chance to play with other musicians like Bruce Springsteen. That’s definitely not bad, right? Besides, it’s an awesome way to get more exposure and connect to new fans. If they have to cover another music act, it’s the network who pays for any rights fee. However, if the artist is a guest, they could get paid anywhere between a few hundred dollars to about a five-digit sum – it basically depends on their relevance, popularity and how big they are. Of course, you wouldn’t expect an emerging star to get the same payout as Bon Jovi or Paul McCartney. If they happen to be a superstar, then it’s going to be quite an amount.

Do you recall the Coachella Festival way back in 2015? It grossed around $84,264,264 in ticket sales. AC/DC headlined the show and we can only assume they get a couple of hundred thousand dollars (or they could have gone for a million or two) for their performance. The truth why most bands are open to performing at festivals like this is that it offers easy cash. There’s very little negotiation that happens because it’s mostly straightforward. Besides, they get access to a wide audience and they always make the news – especially the headliners. It’s basically a win-win situation for them no matter how you look at it. You see, even smaller acts get paid somewhere around $10,000-100,000 for their festival performance. Superstars can easily demand up to $4 million depending on their relevance – and they’re headliners so they’re basically the ‘magnet’ that helps lure in more people to the event.

This is where most of the money’s at. An emerging artist could make up to $15,000 as an opening act. And big stars could easily earn $200-400k for every show. For the first half of 2016, Bruce Springsteen topped the list for the highest grossing tours. He and his band made $171 million in ticket sales. The Rolling Stones, even with only 13 concerts, also managed to make it to the top 10. For AC/DC, after they hit a bump when Brian Johnson had to leave because of some medical problems, they still managed to make it to the 17th spot in the Forbes Celebrity 100 after grossing $67.5 million. They raked in some serious cash even with a different temporary frontman – Axl Rose who somehow found a way to juggle his responsibilities with both AC/DC and Guns ‘n Roses. The Rolling Stones clocked it at no. 18 with $66.5 million.