7 Classic Rock Albums Every Parent Should Introduce To Their Kids 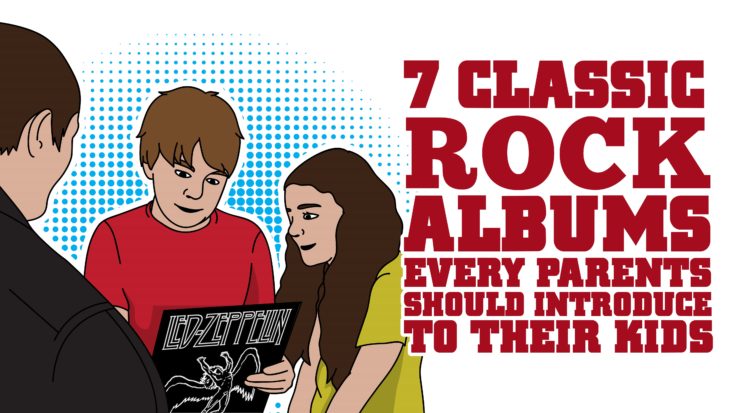 You want to win the ‘Parent of the Year’ award? Then this is how you do it. It’s a huge parenting win if their kids love the same classic rock albums they do. So, what do you say? Should we start introducing them to what real music is like?

P.S. This is in no particular order.

It came out more than 40 years ago but it keeps on rockin’. You see, if Bob Seger released “Night Moves” and didn’t have any follow up after, he would still secure his place in the rock ‘n roll pantheon. The man became an overnight sensation. The title track alone propelled him to rock god status. He wasn’t your average rockstar.

“As a result of Night Moves, he has suddenly become one of the hottest attractions in pop music. Virtually every song on Night Moves has a hunger, toughness and drive that is almost palpable, and in the lyrics Seger has written for the powerful surging melodies can be found a continuing fascination with the underdog, the loser and the oppressed.” – Larry Rohter

It was already his ninth studio album and to be fair, he was already a legend in his hometown. The rest of the world just needed an introduction to what would become a masterpiece. If your kid is a bit skeptical about listening to classic rock, this will put all their doubts to rest.

Led Zeppelin has an impressive catalog. It’s a daunting task trying to pick their top 10 songs but when it comes to the album you want your kid to listen to first, it should be the legendary group’s fourth studio album. One thing we like about this is that it was Led Zeppelin’s way of hitting back at the press and their critics (the Led Zeppelin III had lukewarm reviews and even ignored by some).

“After all we had accomplished, the press was still calling us a hype. So that is why the fourth album was untitled.” – Jimmy Page

For one, there’s absolutely no weak moment here even you play it over and over again. It highlighted all the band’s strong points. Their music was heavy and powerful – it basically captured them at their absolute best. It’s the kind that kids should blast in their cars – and we bet, you probably wouldn’t mind in the least.

We can never leave out Journey’s breakthrough album from this list, not a chance. Although “Inifinity” is the band’s fourth album, it was the first one to feature Steve Perry who, as we all know eventually became a legendary frontman and vocalist. It was quite a metamorphosis and while not every ‘big change’ works for every group, it paid off nicely for Journey.

It was indeed a turning point for the band. It was like telling the world “Steve Perry” has arrived. It was brilliant and definitely a stroke of genius. And if course, we were never the same way again. These are tunes your neighbors will thank you for cranking up.

Apart from their musical greatness, AC/DC is one heck of a tough band. Over the decades, they had to endure numerous stumbles along the way – frontman Bon Scott’s death, Malcolm Young’s battle with dementia, and Brian Johnson’s sudden departure while on tour. But if they proved anything, it’s the fact that they can bounce back. Take this album for example. They lost Scott and with Johnson on vocals, the recording was just as difficult because of tropical storms in the Bahamas at the time.

“I just said, ‘I’m not gonna do this again. I was away from home all the time, missed my daughters growing up. But then I got curious and thought, ‘Well, what’s the harm in trying out?’ So I went down, sang with the boys and…. Boing!” – Brian Johnson

It was a smashing success. It’s hard to pick one favorite song because every track is just epic. It’s a masterpiece, no doubt.

Jim Croce may not have had a long career in music but he sure left quite a mark. Before his death in 1973, he released five studio albums but what you should give to your kid is his 1974 compilation album “Photographs & Memories: His Greatest Hits.” The thing about Croce is he’s not just any singer-songwriter, his lyrics contain stories. The moment you get hooked, he’ll take you on a rollercoaster ride of emotions.

“It is hard to believe one man poured out a fountain of excellent work in barely two years, but this LP offers proof of the greatness of Croce’s career and is, in all respects, truly a greatest hits album. They’re all worthwhile and this magnificent collection makes one realize just how greatly this man will be missed. The beauty of music, however, is that he will always be heard.” – Billboard Magazine

“I’ll Have To Say I Love You In A Song” is just one among many songs that’ll hit you right in the feels.

Our favorite part about this album is EVERYTHING. Although for the most part, it’s quite heartbreaking to know she didn’t have the chance to enjoy its success (it was released three months after her death), “Pearl” was able to capture her soul. It sounds poignant and intimate. It takes the cake for the sheer passion and soul.

“Pearl is more refined and careful and labored and not as exciting, but it does show, on occasion, that the girl who let loose with Big Brother had other things to offer that were equally valid as the uninhibited rocking and souling that had become her trademark and her legend. This is not a new Janis, but a redefined, more organized, old Janis.” – Rolling Stone’s Jack Shadoian

Her powerhouse vocals, which in a way was a masterpiece all by itself, wasn’t drowned out. “Pearl’ highlighted the power in every note and tune. It was stripped down and that made it all the more epic.

They say there’s always a silver lining in everything and that couldn’t be truer for Fleetwood Mac. Somehow, they poured all their pent-up emotions and private turmoil into one masterpiece – “Rumours.” Who said messy relationships don’t lead to anything? For the group, it gave them their absolute best album – it was Fleetwood Mac at their finest.

“We refused to let our feelings derail our commitment to the music, no matter how complicated or intertwined they became. It was hard to do, but no matter what, we played through the hurt.” – Mick Fleetwood

It was like watching an elaborate saga unveil right before your very eyes. Dramatic, emotional but a brilliant work of art nonetheless. It’s not your typical “he said, she said.” The lyrics are brutal, honest and unforgiving but that made it all the more irresistible.

Your kids will love this. Just don’t let them in on the real story behind it yet.