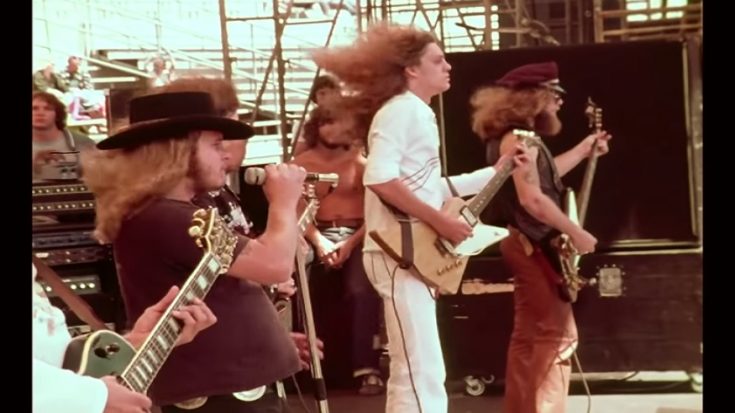 One of the best southern rock bands, Lynyrd Skynyrd’s status seemed to have elevated right from the moment they started. They were notorious for spearheading the southern rock genre in almost every rock radio station in the country. Yet, all of a sudden, tragedy befall them while they were in the midst of promoting their fifth album: when the three members of the group were killed in the awful plane crash.

In 1977, the band decided to go for a 3-month long tour to promote their newly-released album Street Survivors. The plane that they’ve chosen was the 1948 Convair 240, a twin-engine airplane that was, well, old. Ronnie Van Zant talked everyone to use it, allegedly saying: “If it’s your time to go, it’s your time to go,” before boarding the plane.

The plane was out of fuel

The plane, after being filled with 400 gallons of 100-octane, low-lead fuel, departed in the airport of South Carolina. They were supposed to be headed in Baton Rouge, Louisiana when Walter McCreary, the pilot, informed everyone that they were low on gas, and “just about out of it.” McCreary requested to land at McComb Airport in Mississippi, to which the control center agreed. But less than a minute later, proclaimed that they’re out of fuel. When Houston asked McCreary to confirm that, he only stated: “I am sorry, it’s just an indication of it.” That was the last communication from him.

The moment finally comes when the plane crashed another 140 feet — with a total of 495 feet right from the time it hit its first tree. The cockpit smashed into the tree, killing both the pilots McCreary and William Gray.

Johnny Mote to the rescue

Everybody was suffering from injuries, and the three borders of the plane, road crew member Ken Peden, Billy Powell, and Artimus Pyle, gained their strength to ask for help. They managed to go to the farm of Johnny Mote, who thought they were some escaped convicts, fired his rifle before he comprehended that these people needed help. Johnny mote said: “One of them was hugging me around the neck, and telling me, “We got to get them out.”

The six people who are killed in the crash: the two pilots, bandleader Ronnie Van Zant, Cassie Gaines, Steve Gaines, and assistant road manager Dean Kilpatrick didn’t receive any help from the others since the remaining ones were heavily injured. The news didn’t reach the people immediately: instead, it grasped the people’s attention in the evening and on the next day’s news.

The investigation for the plane crash

After the long investigation from the US authorities, they’ve found out that the engines “ceased to produce power because the aircraft’s useable [sic] fuel was exhausted.” The final statement mentioned that the engine malfunction resulted in higher fuel consumption, therefore, resulted in the loss of fuel.

The rapid sales of the album

In the wake of the tragic plane crash, fans have brought the two versions of the album Street Survivors: one with the plain black cover, and the other one where there’s a fire behind them. It achieved platinum status.

The remaining members, and new additional ones

After the awful incident, the remaining people of Lynyrd Skynyrd would take time to heal their wounds, both physical and emotional. But 10 years after, the band had the privilege to reunite, and Johnny Van Zant, Ronnie’s younger brother, became the singer of the group. Ed King, the new guitarist, also joined. The live album, Southern by the Grace of God, was the result.

The making of the Documentary Street Survivors: The True Story of the Lynyrd Skynyrd Plane Crash

In 2016, there was a proposed documentary written by Pyle and Jared Cohn named Street Survivors: The True Story of the Lynyrd Skynyrd Plane Crash. The film was apparently finished, but it was yet to be released by Cleopatra Films.

Today, the crash site of the band’s plane tragedy, near the woods of Gillsburg, was craved with lots of “Free Bird” statements. Fans frequently visit the site, to pay tribute to the fallen heroes of southern rock. In 2019, the last original member Gary Rossington is still touring with the other members; giving hope still to the loss they have endured back in the 70s.