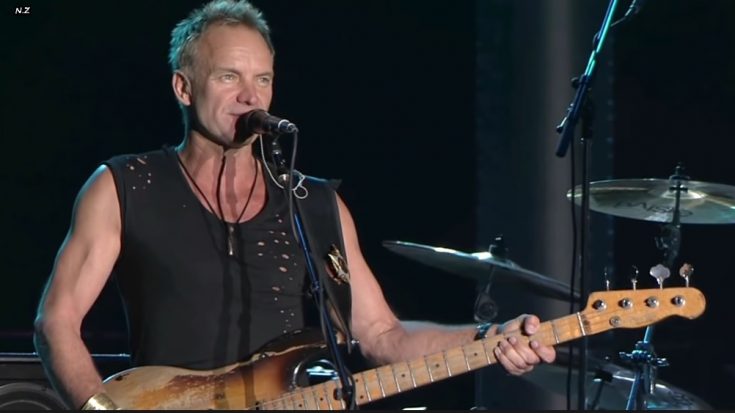 In 2007, The Police regrouped for a world tour called The Reunion Tour to celebrate 30 years since their first show. As expected, the show was nonetheless spectacular; a thing you shouldn’t miss out on.

The worldwide tour saw the trio traveling to different parts of the world. In Asia, they happen to stop by Japan’s Tokyo Dome, one of the country’s most famous arenas. The typical setlist of the band ranges from their iconic hits: “Message in a Bottle,” “Every Little Thing She Does Is Magic,” “Roxanne,” “Driven to Tears,” “Walking on the Moon,” and a few other lesser-known songs. Of course, no Sting concert would be complete without his iconic song, “Every Breath You Take,” which evidently, took everyone’s breath away in this 2008 performance of theirs with the video seen below.

Sting is as simple as he could get; with his guitar and a voice similar to an angel’s, the musician, along with bandmates Andy Summers and Stewart Copeland, wooed thousands of fans with his signature song that made The Police a legendary band of today.

“Every Breath You Take” is a track from of the Police’s album Synchronicity (1983). Written by Sting, the single was 1983’s biggest success in the United States and Canada, spending eight consecutive weeks at the top of the Billboard Hot 100 and four on top of the Canadian RPM Chart, respectively. On multiple occasions, Sting voiced his opinion about this well-beloved song, whose meaning seems to lean more on being obsessed and jealous of someone, rather than the audience’s assumption of it being an innocent love song. Nevertheless, the song continues to boost Sting’s career, and it appears that the song will remain for more years to come, given that it’s one of the most frequently played songs on radio stations all over the world.

You can watch the band’s performance below.